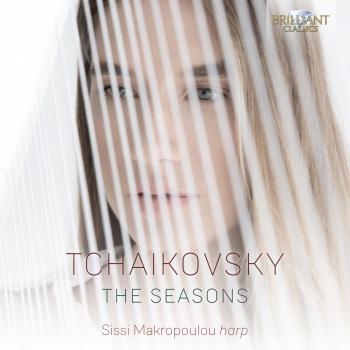 Sissi Makropoulou
In 2007 Sissi made her debut as a second prize winner at the 5th international competition for harp in Holland. In 2010 she was an award winner at the Young Soloist competition in Athens, where she fired up the Greek audience while performing Debussy's Dances with the Athens State Orchestra.
She was educated at the Atheneaum Conservatory, at the Conservatorium van Amsterdam, the Hochschule für Musik Detmold and the Universität der Künste Berlin, where she completed her second Masters in Music under the supervision of Marie- Pierre Langlamet (Solo Harp/ Berlin Philharmonic). The athenian harpist Sissi Makropoulou celebrates music in a multi-faceted, but still very personal way. Living and working in Berlin, she enjoys her collaborations with orchestras such as the Berliner Philharmoniker, the Deutsche Oper, the Scharoun Ensemble, the Deutsches Symphonie-Orchester Berlin, the West-Eastern Divan Orchestra and the Athens State Opera. She has played under the baton of Daniel Barenboim, Andris Nelsons, Matthias Pintscher, Yannick Nézet-Séguin, Donald Runnicles, Tugan Sokhiev and T.Currentzis.
Sissi Makropoulou is also active as a composer, especially in the world of Dance-Theater. Her works have been performed in Berlin (Sophiensäle), Munich (Münchener Kammerspiele), Vienna (Brut), Zurich (Gessnerallee), Frankfurt (Mousonturm) and Stockholm (Dansmuseet). Furthermore, the art of transcription plays an important role in her artistic existence not only as an interpreter but also as an author. Numerous original works for piano have been arranged by her for harp, some for the first time, and were performed in Germany, Greece and Holland.
Moreover, under the pseudonym Sissi Rada she is a active in the electronic scene as a singer, lyricist and writer of various blogs and magazines (Local Suicide, Athens Voice, Popaganda). She has collaborated with David August, Kadebostany, Lena Platonos, Foivos Delivorias and performed in Festivals like the Berliner Festspiele, Electronic Beats Festival, Xjazz Festival. In 2016 her first album entitled Pragma was released via Inner Ear Records. In summer 2019 her second album is coming out on Kryptox Records.