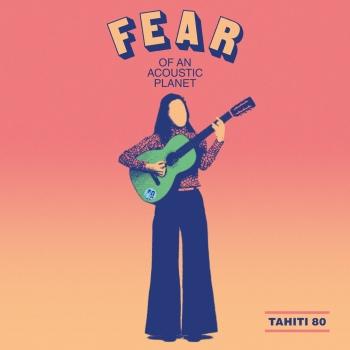 Fear of an Acoustic Planet

Tahiti 80
are a French indie pop band from Rouen. The group was founded in 1992 by Xavier Boyer, Pedro Resende, Médéric Gontier and Sylvain Marchand.
Singer and guitarist Boyer and bassist Resende formed the pop combo as students at the University of Rouen, sharing an affinity for indie music, new wave and sixties pop. Taking their name from a souvenir t-shirt given to Boyer's father in 1980, the duo recruited guitarist Mederic Gontier, and with the addition of drummer Sylvain Marchand a year later, the lineup was complete. The foursome released a self-produced and self-financed EP, "20 Minutes" (Bobby Records 1996) which resulted in them signing a deal with French label Atmospheriques.
In 1998, the band flew to NYC to record their first album Puzzle with Andy Chase. Featuring contributions from Eric Matthews and Adam Schlesinger, "Puzzle" was mixed in Sweden with Tore Johansson. The record, released between the end of 1999 & early 2000 received much praise from the press (band of the week in Melody Maker in Spring 1999), and saw the band touring the world to promote it. Puzzle received a gold certification from the RIAJ in December 2000.[1] Of all the singles taken from the album, "Heartbeat" was the most successful. Tahiti 80's US label, Minty Fresh, released a mini LP called Extra Pieces, which included B-sides, remixes & other rarities.
In 2001, the band re-united with Andy Chase to record a more experimental follow up album Wallpaper for the Soul. The sessions took place in Rouen, NYC, Etretat, London & Portland (Oregon). Collaborators on this effort include mixer Tony Lash and Let It Be arranger Richard Hewson. Wallpaper for the Soul was released in 2002, garnered good reviews (it was selected as one of Uncut's top 10 albums of the year) and was followed by another mini album "A piece of Sunshine" made up of out-takes from the prolific album sessions.
Following that, Xavier Boyer selected songs for a compilation called "A Piece of Gold" on behalf of the band. Featuring various artists such as Todd Rundgren, The Small Faces, Donald Byrd....) it was only released in Japan for copyright reasons.
For their third album, from 2003–2004, Tahiti 80 spent several months at their own recording studio, the Tahitilab. The way of working was different this time: as opposed to Puzzle & Wallpaper for the Soul, the songs were mostly improvised and written in the studio. The soul journey which began on songs like "Heartbeat" and "1,000 Times" matured on Fosbury. They collaborated with Neal Pogue (co-production & mix) and Serban Ghenea (mix), respectively Outkast's and NERD's sound engineers, with British singer Linda Lewis duetting on "Your Love Shines". "Better Days Will Come" was featured in the first episode of the fourth season of Smallville (an American television series) in September, 2004.
Between tours, Boyer & Resende produced a couple of albums by friends (Fugu, Calc) whilst Xavier Boyer—under the anagram pseudonym Axe Riverboy—recorded the somewhat folk-influenced solo album "Tutu To Tango".
In 2007, the band transferred to Universal's Barclay label and in 2008, they went back to the Tahitilab to record Activity Center. It was described by the critics as a back to basics album, with a rawer sound and a rock production style. Sylvain Marchand wasn't involved as a drummer as ear problems which had plagued him for years, prevented him from recording his drum parts. Drums were subsequently played by Julien Barbagallo with percussion by Raphael Leger (respectively Tahiti 80's live keyboardist/percussionist and drummer). To promote the album, the band explored new territories (Taiwan, South America) and they even licensed the album for release in the US on their own imprint "Human Sounds" (a reference to "Pet Sounds" by The Beach Boys).
During winter and early spring 2010, Tahiti 80 recorded their fifth album, The Past, The Present & The Possible. The album was released in early 2011. In 2012, Barbagallo left Tahiti 80 to join Tame Impala, with multi-instrumentalist Hadrien Grange of Parisian pop group Dorian Pimpernel replacing him.[2] In 2014, Tahiti 80 released Ballroom, their sixth album which was co-produced by Richard Swift.