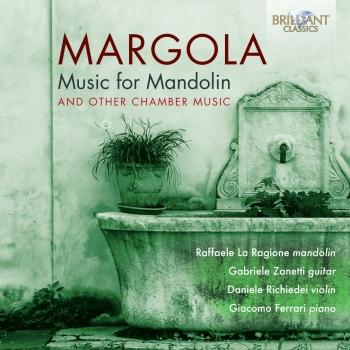 Margola: Music for Mandolin and other Chamber Music

Giacomo Ferrari
was born in Milan on October 12, 1985. His interest in music came at the age of six when he took up piano lessons with the music teacher Giovanni Mazzei until eleven.
He attended the Italian middle school specialized in music in via Vivaio in Milan, with the teachers Edoarda Pardini, Giovanni Vitaletti and Vera Zanotti. During this period he was strongly encouraged to take part in national competitions where he got very good results. He kept up his piano studies and secondary education at the Giuseppe Verdi Conservatory of Music in Milan, where in 2006 he got his First Level Academic Diploma in piano performance with the highest marks, trained by the teacher Daniele Lombardi. He also took a three-year harpsichord course held by the teacher Ruggero Laganà.
In 2008 he obtained his Second Level Academic Diploma in chamber music with full marks under the guidance of Luigi Zanardi. At the same time he intensely collaborated with the same Conservatory as accompanying pianist.
Enjoying music to the full, he also attended for two years a jazz course with the teacher Mario Rusca.
In 2009 he has been awarded a scholarship by the Manhattan School of Music in New York. In 2009 and 2010 he went to Germany for a piano duo course kept by the teachers Hans-Peter and Volker Stenzl and in 2012 to Budapest for a chamber music course kept by Isabelle Oehmichen. He has a special passion and interest for the educational environment: he teaches at the music school “Ricordi Music School” in Milan, grows personal pedagogical projects and gives private piano lessons.
From 2014 is working as accompanist at the G. Verdi Conservatory of Music in Milan and in 2019 was one of the official accompanists of the Società Umanitaria’s International Competition.
Gabriele Zanetti
born in Iseo (BS), graduated from the Conservatorio Marenzio in Brescia. Parallel to classical studies, he has always been interested in acoustic and electric guitar.
He plays in mandolin and guitar Orchestra "Città di Brescia" directed by M ° Claudio Mandonico, with whom he has recorded several monographic works dedicated to important authors.
Parallel to the repertoire of classical music, with the Swiss guitarist Antonio Malinconico proposes pieces of South American and ethnic music. He founded the "Giacomo Merchi" quartet of guitars, which is dedicated to concert activity with original pieces.
In duo with Eugenio Reboldi he recorded a record entirely dedicated to works of the second half of the century for cello and guitar as well as three first performances dedicated to the duo. With the mandolinist Raffaele La Ragione he held several concert-conferences on the repertoire of Carlo Munier. He plays in duo with the Romanian violinist Anca Vasile, with the saxophonist Guido Consoli and with the flutist Massimiliano Pezzotti.
With the mandolinist Camilla Finardi performs an intense concert activity in Italy and abroad: the duo has won the 5th edition of the international festival "Città di Ala" and has recorded the album That Italian Mandolin. The duo has also recorded Souvenir (Movimento Classical, 2016), attached to the prestigious Amadeus magazine in June 2016, dedicated to the rediscovery of the original repertoire found in a research carried out in the popular magazines of the early twentieth century.
With Quartetto Zenzero, in which he plays the cavaquinho, offers a repertoire entirely dedicated to choro, traditional Brazilian instrumental music: the quartet has released the album BRASIL. He has collaborated with the guitarist Giorgio Cordini, with the actors Alberto Gamberini, Sergio Isonni and Luciano Bertoli.
He founded InformalQuartet, an unusual formation dedicated to contemporary music for which works by important composers have been written. He recorded the guitar architecture record as soloist, containing two unpublished works by Claudio Bonometti and Paolo Ugoletti. With Stefano Gamba he recorded Aulodia (Movimento Classical, 2015), dedicated to the original twentieth century music for clarinet and guitar. With the jazz saxophonist Guido Bombardieri he released the album South America Landscapes (DaVinci Classics, 2017), dedicated to South American music in its derivations candombe, choro, tango, containing also the Sonata del Caminante di Brouwer. With Lorenzo Ricchelli he published Deconstructing Dowland (DaVinci Classics, 2018), focusing on the relationship between pure sound and electromechanical interaction.
He wrote the teaching method for young guitarists MUSICHIAMO CON LA CHITARRA. In addition to articles in newspapers and magazines, he published the critical essay Red Hot Peppers on the rise of jazz and popular music. He wrote the book Tar e la chitarra del tempo. a novel in which the history of the guitar is explained through the journey of a cat.
Always interested in music research, he has edited the modern edition of several unpublished works by important authors such as Rossini, Donizetti, Margola, Ponce, Bortolazzi and others. He rediscovered the manuscript of the Sixth Concerto by Niccolò Paganini in the original version for violin and guitar and edited the revision for the Japanese publisher DaVinci.
As a recording engineer he took part in dozens of recordings, also taking care of the artistic direction and the drafting of the related booklets.
He carries out an intense teaching activity in various associations and is a guitar professor at SMIM.