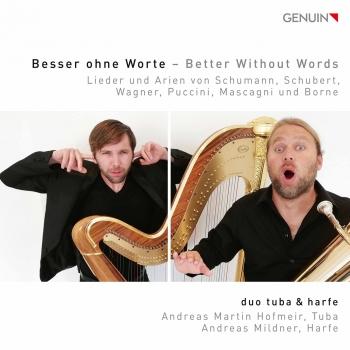 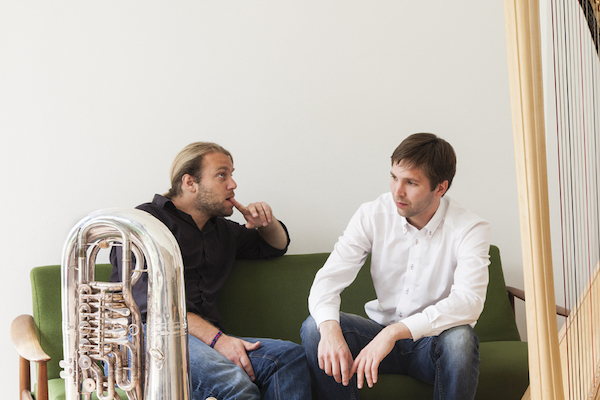 Andreas Martin Hofmeir
Born in Munich in 1978, A ndreas Mar tin Hofmeir grew up in Geisenfeld/Holledau, found his way to the tuba via the piano, drums and tenor horn at the age of twelve. After three years of private lessons with Robert Tucci (Bayerische Staatsoper) he commenced his studies with Prof . Dietrich Unkrodt at the Hochschule für Musik “Hanns Eisler” in Berlin in 1998. After a study year abroad in Stockholm with Michael Lind at the Royal College of Music in 2001 he took up studies with Prof. Jens Björn-Larsen at the Musikhochschule Hanover. He received a scholarship from the orchestra academies of the Berliner and Münchner Philharmoniker and also played with the Wiener Philharmoniker, the Gewandhausorchester Leipzig, the Sinfonieorchester des Bayerischen Rundfunks, the Bamberger Symphoniker and the Bayerisches Staatsorchester. From 2004–2008 he was principal tuba with the Bruckner-Orchester Linz under Dennis Russell Davies. In 2004 Andreas Martin Hofmeir won the prestigious “Città di Porcia” international tuba competition in Pordenone, Italy. His greatest triumph was in 2005 when he was awarded the prize of the Deutscher Musikwettbewerb in Berlin, the first tuba player to ever do so in the history of this competition. Andreas Martin Hofmeir performs as a soloist with well known orchestras such as the Radiosinfonieorchester Berlin, the SWR Rundfunkorchester Kaiserslautern, the Niedersächsisches Staatsorchester and the Bruckner-Orchester Linz. With harpist Andreas Mildner he founded the first tuba-harp duo in the world and appeared in concerts at well-known festivals such as the Ludwigsburger Schlossfestspiele, the Schleswig-Holstein-Musikfestival, the Festival Mitte Europa and the International Harp Festival in Rio de Janeiro . His concerts are regularly broadcast by various radio stations including BR, NDR, SWR, Deutschlandradio, Deutschlandfunk and RAI. In September 2006 he was named the successor to Prof. Hoppert at the Universität Mozarteum Salzburg and in 2010 was named full professor. In addition, he gives master classes in Germany, Austria and Brazil and is a sought after juror for competitions in his area of specialization. Apart from his activity as a classical musician, Hofmeir has also been appearing on stage as a cabaret performer for thirteen years. He has written and performed in eleven programs until now, most recently with the ensemble “Die Qualkommission”, with whom he received an award at the Passau Scharfrichterbeil. Together with Roman Deininger he wrote and directed the cabaret show “Der Ball ist wund” at the Landestheater Linz in 2008. He became very well known as the tuba player for the well known Bavarian band “Labrassbanda” with which he has already toured four continents and recorded two CDs and three LPs. Andreas Martin Hofmeir plays tubas made by B&S.
Andreas Mildner
born in 1984, is one of the most interesting harpists of his generation. Through his "technical brilliance" and "incredibly aesthetic use of timbres," he succeeds in impressing critics and audiences time and again.
When he was six years old, he discovered his enthusiasm for the harp and was accepted into the harp class of Gisèle Herbert at the age of fourteen. He received further inspiration from Ursula Holliger, Frédérique Cambreling, and Marie-Pierre Langlamet.
With his exceptional and extensive repertoire, Mildner is a sought-after soloist in Germany and abroad. At the age of seventeen, he made his solo debut with the Czech Chamber Philharmonic Prague. Since then he has been regularly invited by several renowned orchestras, including the symphony orchestras of the WDR and SWR and the Bremen Philharmonic Orchestra.
Mildner has won prizes at numerous music competitions. In 2012 he received the Bayerischer Kunstförderpreis (Bavarian state award for the advancement of the arts). He has been a scholarship holder of the Jürgen Ponto Foundation, German Foundation for Musical Life, German National Academic Foundation, and German Music Council. In 2007 Mildner received a teaching position and in 2015 was appointed professor at the University of Music Würzburg.
Mildner is a frequent guest at numerous music festivals, including the Mecklenburg-Vorpommern Festival, Ludwigsburg Palace Festival, Schleswig Holstein Music Festival, World Harp Congress, and Lucerne Festival.