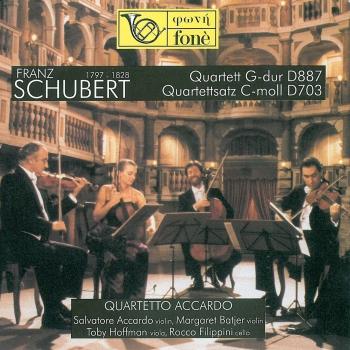 Salvatore Accardo
began violin lessons at six and studied with Luigi d’Ambrosio at the Naples Conservatory, working to a strict regime of scales and Ševčik exercises. He undertook additional studies at the Accademia Chigiana, Siena, with Yvonne Astruc (a pupil of Enescu), where he was able to play with the likes of Pablo Casals and Alfred Cortot. He later became a teacher there himself but bemoaned the dearth of chamber music, considering this fundamental to a musician’s experience and development. Throughout his career he has been instrumental in setting up various festivals, academies, master-classes and ensembles designed to encourage the highest levels of achievement amongst string players, and his relaunching of the Orchestra da Camera Italiana in 1996 provided an ensemble specifically for the best graduates from the Walter Stauffer Academy. Accardo and the OCI have made some significant recordings including, in 1999, the complete violin works of Astor Piazzolla (Fonè) and the complete Paganini violin concertos (EMI Classics).
Winning the first Paganini Competition in 1958 shot Accardo to stardom and he became known immediately as a Paganini specialist. This reputation was cemented by a complete recording of all six concertos attributed to the violinist-composer (No. 6 is considered spurious) with the London Philharmonic, and Accardo has always disputed the popular view that Paganini was simply a violinistic wizard. Despite this early specialism, his repertoire spans all centuries of violin writing.
Accardo represented Italy at the Paganini Bicentenary celebrations in New York and was allowed to use Paganini’s 1742 Guarneri del Gesù ‘Canon’ violin, chosing (perhaps recklessly, given the unpredictability of a museum-piece instrument in foreign climes!) to perform the 24 Capricci. He recorded an album of various works on this instrument in 1992. Aside from this, Accardo plays almost exclusively on the 1727 ‘Hart’ Stradivarius, which he bought from Zino Francescatti; some consider that his sound became akin to that of Francescatti through association with this particular instrument.
Accardo’s discography is broad in scope, ranging from contemporary music (a number of composers have written for him, including Piazzolla, Piston and Xenakis) to Baroque repertoire. It seems appropriate to begin with Paganini, represented here by the concertos recorded in 1998 under his own direction. All of these concerto performances show a lively and committed approach, balancing high spirits with Paganini’s exhibitionist interpretation of the early Romantic violin concerto style inherited from Giovanni Battista Viotti. Accardo’s tone in the Concerto No. 2 is bright and transparent (comparisons with Francescatti being thus well deserved), although there is a tendency to force the tone in high registers making the E-string sound rather metallic, and his accuracy here, as elsewhere, is not unimpeachable. He uses a continuous vibrato in the modern mould and largely avoids portamenti. The opening of the finale sounds in need of more contact with the string, but his ricochet bowing is beautifully judged here, as it is in his lively 1995 reading of Elgar’s La Capricieuse on Paganini’s 1742 Guarnerius.
Well-balanced and more accurate are Accardo’s 1978 disc of Bruch’s Romance for Violin and Orchestra (Accardo has recorded all of Bruch’s violin music) and the brooding and rather unsettling sound-world of Piazzolla’s Oblivion (2002) with its idiomatic quotation of jazz-like elements, conveyed with sweetness and an appropriate degree of stylistic irony.
Accardo’s Baroque repertoire is praiseworthy, although one might question the aesthetic consistency of a Baroque accompaniment (both in style and instrumentation) alongside his entirely modern sound. There is a strong reading (1982) of Bach’s Double Concerto with the equally assertive Anne Sophie-Mutter. His Vivaldi C minor Sonata (1977) contains some effective ornamentation in the slow movement, although Accardo does find it impossible to resist the modern vibrato!
His playing, then, is not flawless. This said, an infectious enthusiasm imbues Accardo’s performances with a distinctive and powerful voice.