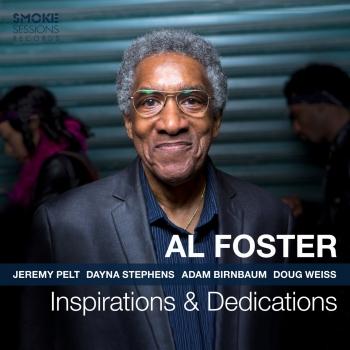 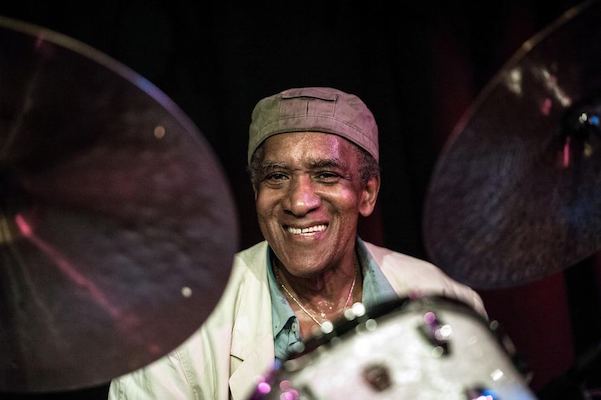 Al Foster
master drummer, has been a major innovator in the world of jazz for five decades. A member of Miles Davis’ band for 13 years, Foster’s contribution to the music is articulated by Davis himself in his 1989 autobiography, Miles, where Davis describes the first time he heard Foster play live in 1972 at the Cellar Club on 95th Street in Manhattan:
He [Foster] knocked me out because he had such a groove and he would just lay it right in there. That was the kind of thing I was looking for. Al could set it up for everybody else to play off and just keep the groove going forever.
Aloysius Tyrone Foster was born in Richmond, Virginia on January 18, 1943. His family moved to Harlem, New York when he was a child. This presented him with the opportunity to live near and study the masters who lived in his neighborhood. Jazz drummer Art Taylor lived in the same building as Al’s aunt, and Art’s mother took a special interest in Al, sensing his love of the music her son was playing.
Growing up in Harlem presented Al with the opportunity to hear many great shows at the Apollo theatre. He heard Miles Davis live in 1958 with his sextet that featured John Coltrane, Cannonball Adderly, Bill Evans, Paul Chambers, and Jimmy Cobb. Other memorable experiences include hearing Buddy Rich and Philly Joe Jones’ drum battle, Art Blakey’s Jazz Messengers with Lee Morgan, Dave Brubeck’s Quartet, and the John Coltrane quartet. These experiences got him hooked on the Music. His father, who was an amateur bassist, bought him a set of drums, and he would practice every day after school.
His first big break in the business came in 1964 when he joined Blue Mitchell’s group on the classic recording The Thing To Do for Blue Note records. Recorded at Rudy Van Gelder’s studio, with Alfred Lion producing, this record has become a classic. It features Blue Mitchell, trumpet, Junior Cook, Tenor, Chick Corea, Piano, and Gene Taylor, bass.
Al quickly became a working musician on the Jazz scene in New York. He played at the Playboy club for several years, supporting his 4 daughters as a single parent.
Over the years, Foster has toured extensively with Herbie Hancock, Sonny Rollins, Joe Henderson, McCoy Tyner, Stan Getz and Bobby Hutcherson, becoming a major attraction in all six bands as well as an integral part of them. Respected and admired for his keen sensitivity, Foster is known for his unique ability to listen to and play off others in an almost telepathic way, responding to them with a style that is at once both charismatic and understated. Foster is a great believer in the purity of the music, a genuine artist who continues to push the boundaries of creativity again and again, devoted to preserving and perpetuating the highest standards in jazz today.
One of Al’s greatest pleasures is composing music at the piano. He is unique among other drummers in the field of jazz, in that his compositions have been noticed by some of the top Artists in Jazz. Pianist Hank Jones recorded three of Al’s compositions, “Papa Joe", “Just Before Dawn", and “Pauletta", for his album For My Father. Eric Reed has recorded Al’s signature composition “Brandyn", and Saxophonist Chris Potter recorded “Bonnie Rose" for his Verve album, Pure. Eddie Henderson, trumpeter, recorded Al’s composition “Missing Miles" on For All We Know. Israeli Saxophonist Eli DeGibri recorded Al’s song “Ooh, What You Do To Me" with an all-star band that also featured Ron Carter, and Brad Mehldau.
Al made his first recording as a leader, Mixed Roots in 1977. Produced by Tao Macero, this album featured Al’s original compositions as well as the saxophone talents of Michael Brecker, Bob Mintzer, and the bassists TM Stevens and Jeff Berlin.
In 1995 Al decided to form his own group, The Al Foster Quartet. The first edition of the group included bassist Larry Grenadier, pianist Dave Kikoski, and Saxophonist Chris Potter.
In 1996, with Doug Weiss replacing Grenadier at the bass, the Al Foster Quartet went to Europe and recorded Brandyn for Laika Records. This recording featured five original compositions by Foster.
In 2005 the band recorded a live record at the Village Vanguard entitled Love, Peace and Jazz. This album was critically acclaimed in Downbeat magazine, and featured Al’s compositions, as well as the pianist Kevin Hays and saxophonist Eli DeGibri.
In 1999 the guitarist John Scofield formed a group with saxophonist Joe Lovano, bassist Dave Holland and Al. They named their collaborative effort ScoLoHoFo. The group toured and recorded an album titled “Oh!" for Blue Note which featured compositions by each of the members of the group. Currently, Al is touring throughout Europe with his band The Al Foster Quartet featuring saxophonist, Dayna Stephens, pianist Adam Birnbaum, and bassist Douglas Weiss. For the past 19 years, Al’s band has been performing at festivals and clubs throughout the world.
Other artists Foster has either performed with and/or recorded with include: Hugh Masakela, Ted Curson, Dexter Gordon, Pepper Adams, Cannonball Adderley, Lou Donaldson, Sonny Stitt, Michael Brecker, Blue Mitchell, Freddie Hubbard, Donald Byrd, Kenny Dorham, Randy Brecker, Mulgrew Miller, Thelonious Monk, Chick Corea, Kenny Barron, Cedar Walton, Hank Jones, Horace Silver, Buster Williams, Ron Carter, Paul Chambers, Stanley Clarke, George Mraz, Dave Holland, Charlie Haden, Eddie Gomez, Mike Stern, Jim Hall, Carmen McRae, Shirley Horn, Abbey Lincoln, Betty Carter, and Bobby McFerrin. The list goes on and on...