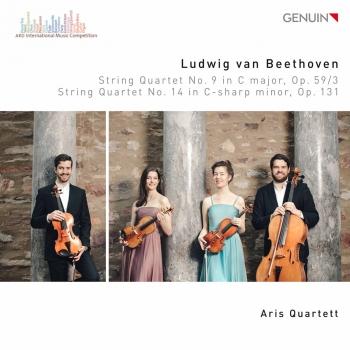 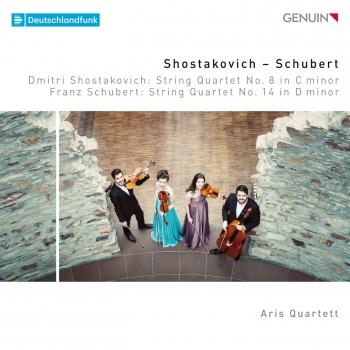 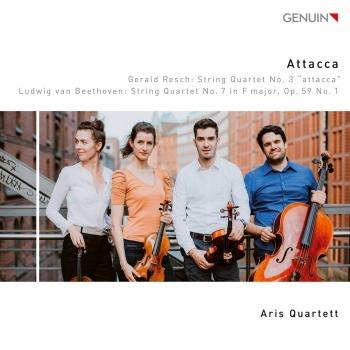 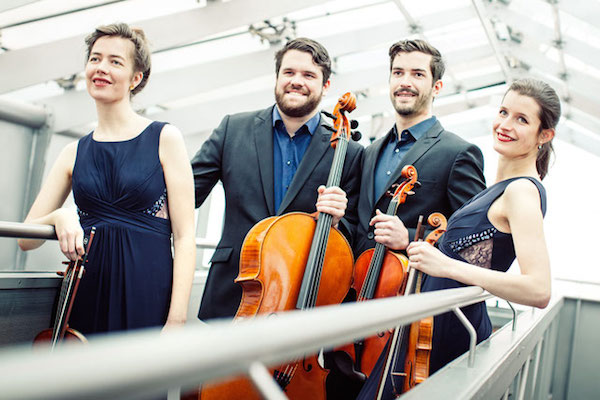 Aris Quartett
The Aris Quartett was founded in 2009 on the initiative of Hubert Buchberger, Professor of Chamber Music at the Frankfurt University of Music and Performing Arts. At the time, Anna Katharina Wildermuth (violin), Noémi Zipperling (violin), Caspar Vinzens (viola), and Lukas Sieber (cello) were still high school students between the ages of fifteen and eighteen, but already studying their respective instruments as junior students at the music university.
Begun as an experiment, this meeting between the four young musicians proved to be a genuine stroke of luck. Noémi Zipperling: “It was truly a wonderful accident that he chose us in particular. Otherwise it probably never would have occurred to us to play chamber music in this combination, since at the time we didn’t know each other at all.”
Eight years later, the Aris Quartett is one of the most striking quartets of the younger generation, with worldwide engagements and performances in the great concert halls and at the major music festivals.
Influenced by their studies with Günter Pichler, the Artemis Quartet, and Eberhard Feltz, the musicians are committed to communicating the passion and emotions of the music to the audience. hr2 Kultur, for example, noted an “exhilarating joy of playing”, the Stuttgarter Zeitung “gripping emotionality”, and the Süddeutsche Zeitung witnessed a “fast-paced per formance, joy in communication, and enthralling playing”, by “an ensemble to whom the future belongs” (Neue Musikzeitung).
These qualities can also be heard in numerous radio recordings in Germany and abroad. In addition to the classical string quartet literature, the musicians are particularly dedicated to performing rarities and unjustly-forgotten works, with a special focus on 20th century compositions. This is also showcased in their first CD recordings, which received enthusiastic critical praise, featuring works by such composers as Reger, Hindemith, and Zemlinsky and released in 2015 and 2016.
They achieved their breakthrough early on with no fewer than four first prizes at their first international competitions: the 2012 Brahms Competition in Pörtschach, Austria, the 2013 European Chamber Music Competition in Karlsruhe, the 2014 August Everding Music Competition in Munich, and the 2016 Joseph Joachim Chamber Music Competition in Weimar.
The Quartet also attracted attention in summer 2016 when it was awarded the Chamber Music Prize of the Jürgen Ponto Foundation, with prize money of 60,000 euros, as well as no fewer than five prizes at the ARD International Music Competition in Munich.
The Aris Quartett is supported by scholarships from the German Music Council, Jeunesses Musicales, Irene Steels-Wilsing Foundation, Villa Musica Rheinland-Pfalz, Peter Fuld Foundation, Anna Ruths Foundation, Yehudi Menuhin’s Live Music Now, and Fundación Albéniz.