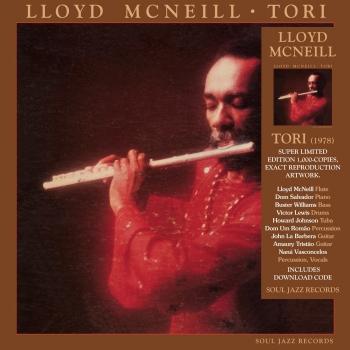 Lloyd McNeill
is a jazz composer, flutist, poet, photographer, teacher, and globally celebrated visual artist. He is regarded by many other musicians as an innovator on the flute. He self-released three legendary recordings between 1969 and 1973. In addition, he has worked with everyone from Nina Simone and Nana Vasconcelos to Ron Carter and Cecil McBee.
McNeill studied music at Dunbar High School in Washington, D.C. before joining the U.S Navy, where he served as a hospital corpsman. Upon discharge he attended Morehouse College in Atlanta where he majored in art. He also played music there -- conga drum notably, though he was already a proficient flutist, working with the Lloyd Terry Band, Simone, and Lionel Hampton. He graduated from Morehouse in 1961, and his senior exhibit drew the attention of James A. Porter, chairman of the art department at Howard University. Porter offered him a full tuition scholarship and McNeill became the school's first MFA student. While at Howard, McNeill studied everything from fresco painting and line drawing to easel painting. In addition to visual art, he undertook advanced flute studies with Eric Dolphy in 1963 during a year at Dartmouth as artist in residence. He moved to Paris in 1964 with saxophonist Andrew White, a Howard classmate and close friend.
While in Paris, McNeill played flute in a variety of settings, and studied at Paris' L'École Nationale Des Beaux Arts. While living there he met Pablo Picasso and his wife Caroline. The remained friends until Picasso's and Caroline's deaths. He also found time to play music, though mostly in Cannes, collaborating with Guatemalan guitarist and singer/songwriter Julio Arenas Menas.
McNeill returned to the U.S., where he accepted the position of artist in residence at Spelman College from 1965-1966.
In 1969, he taught part-time at Howard and began playing with jazz groups around town. That year, Asha, billed to the Lloyd McNeill Quartet, appeared from his Asha Records label. It was followed by the duo offering Tanner Suite with bassist Marshall Hawkins.
In 1970, McNeill began a three-plus-decade teaching association with Rutgers University, and moved to New York City. He not only taught art, but Afro-American History, and was instrumental in the development of the school's jazz studies program. He did advanced flute studies with Harold Jones and issued his second quartet offering, Washington Suite, the same year. It featured White as an added guest.
McNeill didn't record again until 1976. In the interim, he traveled to West Africa on a State Department grant and visited and studied in Senegal, Benin (then Dahomey), the Ivory Coast, Ghana, and Nigeria, where he met Fela Kuti, stayed at his home, and played at his club in Lagos. While in Africa, McNeill gave lectures, painted, drew, and exhibited his art.
In 1976, McNeill formed another label, Baobab Sounds, on which he issued Treasures. His band included McBee, Ray Armando, Dom Salvador, Brian Brake, and Porthino. Busy teaching and working as an integral part of the African-American art and music communities, McNeill didn't record again until 1978, when he released Tori on Baobab. While Armando was once again part of the group, the rest of the band included guitarist John La Barbera, bassist Buster Williams, drummer Victor Lewis, percussionists Dom Um Romão and Vasconcelos, and Howard Johnson on tuba.
The final recording from Baobab, and McNeill's last recording for 18 years, was 1980's Elegia, which featured McBee, Porthino, Salvador, White, guitarist Claudio Celso, and vocalist Susan Osborn.
From 1980 to 1998, McNeill taught, painted, wrote, published poetry and essays, and exhibited nationally. When he returned to recording, he cut the duet album Ex.Tem.Por.E with pianist Richard Kimball on New Milford Records. McNeill retired from Rutgers in 2003 but remained Professor Emeritus. In 2007, he was chosen by the United States Postal Service to design a postage stamp for the celebration of Kwanza. It was circulated in 2009.
In 2010 Soul Jazz, through its Universal Sound imprint, re-released Asha, and followed it in 2011 with a new version of Washington Suite. (Thom Jurek, AMG)