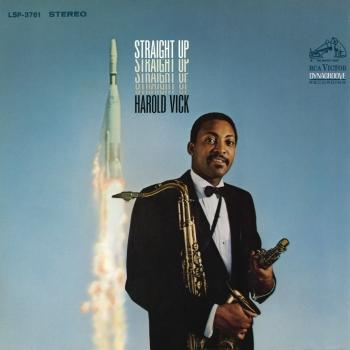 Harold Vick
"When Harold Vick was a young boy his ambitions went in two directions. Either he would become a professional basketball player or a professional musician. As he grew up he attained six feet four inches, the height that helps an aspiring basketball player, and he also had talent, evidenced by his winning an award in the sport while at college. As a child in Rocky Mount, North Carolina (he was born there on April 3, 1936), Vick heard the music of Louis Armstrong and Bing Crosby on his grandmother's Gramophone. When Vick was fifteen he received a tenor saxophone for Christmas, and in seven months he was playing weekend jobs. After high school he entered Howard University in Washington, D.C. where he studied psychology and sociology. Although he knew, after two years, that music was to be his life, he decided to finish his liberal arts education before devoting himself fully to his chosen profession.
Until his graduation in 1958, Harold helped support himself by working in the house band at the Howard Theater under former Ellington saxophonist Rick Henderson. There he was able to play with pros and absorb the kind of varied experience that is invaluable to the young musician. After graduation Vick began working with a series of bands that used to be called rhythm and blues. First he was with Red Prysock, then Paul Williams, Ruth Brown and Lloyd Price. In 1960 he left Price, came to New York, and gigged with Howard McGhee and Philly Joe Jones. Then he became part of organist Jack McDuff's group for several years. Recently he has appeared with the quartet of pianist Walter Bishop, Jr., and in a big band led by pianist Duke Pearson.
Through the years, some of Vick's preferred saxophonists have been Lester Young, Sonny Stitt, Sonny Rollins, Dexter Gordon, Gene Ammons and John Coltrane. He credits Miles Davis' former tenorman George Coleman with helping his approach. From this list you can get an idea of Harold's playing attitude. It is modern, but within a tradition that stands for melodic improvisation and that forward thrust known as swing. It has a relaxed, unhurried, unharried quality that is decidedly very easy listening." - Ira Gitler