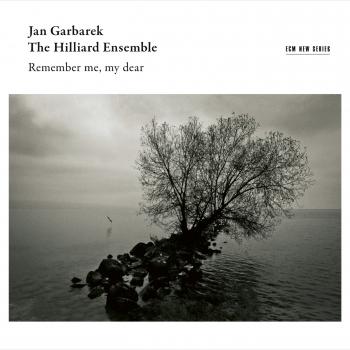 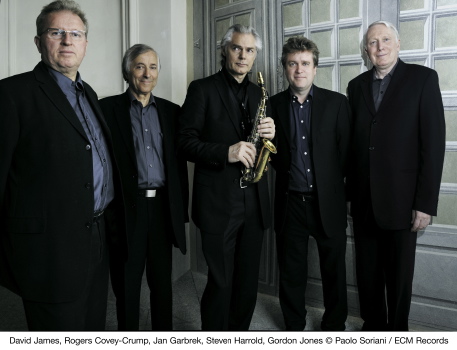 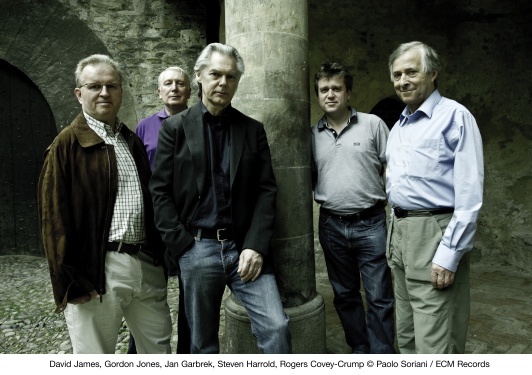 The inspired bringing together of Jan Garbarek and the Hilliard Ensemble has resulted in consistently inventive music making since 1993. It was the groundbreaking “Officium” album, with Garbarek’s saxophone as a free-ranging ‘fifth voice’ with the Ensemble, which gave the first indications of the musical scope and emotional power of this combination. “Mnemosyne”, 1998’s double album, took the story further, expanding the repertoire beyond ‘early music’ to embrace works both ancient and modern.
The Norwegian saxophon player, Jan Garbarek had an early breakthrough into the elite of modern jazz in the 60's, due to his extensive cooperation with Keith Jarrett. His name is listed next to the big names from the U.S. and is associated with the birth of an original european sound in jazz.

His tone is clear, indipendent, ascetic and pure. 'The north and nature, song and mystery' are what Garbarek calls his origins and these are his unrefutable heritage. If it wasn't for his strong inner connection with Norwegian folklore, he wouldn't be able to integrate Brasilian and Asiatic influences as convincingly as he does. That the origin of all music lies in song, is to be felt in many of his compositions, and his greatest attention lies on melody and on the clear articulation of melodious-lines, that he plays with unmistakable impressive urgency. 'In my best moments I hope to give meaning to every note'.
Suddenly, out of an oscillating melody, Garbarek's horn emerges, keeping its sovereignty into the highest pitches, and without giving way to uncontrollable recklessness. His unisono playing with Eberhard Weber's singing bass gives his songs a hymnal luster. The breadth of peacefulness and maturity in his music eliminates all question of stylish fashionability.
Jan Garbarek's Chambermusic-Jazz might well be the most beautiful sound next to silence, and he, as sculptor of these sounds, is intrinsingly connected with the illustrative and folkloristic qualities and influences. He is an original stylist always searching for new realms for his intense and extremely visual music.
Unrivalled for its formidable reputation in the fields of both early and new music, The Hilliard Ensemble is one of the world's finest vocal chamber groups. Its distinctive style and highly developed musicianship engage the listener as much in medieval and renaissance repertoire as in works specially written by living composers.
The group's standing as an early music ensemble dates from the 1980s with its series of successful recordings for EMI (many of which have now been re-released on Virgin) and its own mail-order record label hilliard LIVE, now available on the Coro label; but from the start it has paid equal attention to new music. The 1988 recording of Arvo Pärt's Passio began a fruitful relationship with both Pärt and the Munich-based record company ECM, and was followed by their recording of Pärt's Litany . The group has recently commissioned other composers from the Baltic States , including Veljo Tormis and Erkki-Sven Tüür, adding to a rich repertoire of new music from Gavin Bryars, Heinz Holliger, John Casken, James MacMillan, Elena Firsova and many others.
In addition to many a cappella discs, collaborations for ECM include most notably Officium and Mnemosyne with the Norwegian saxophonist Jan Garbarek, a partnership which continues to develop and renew itself, and Morimur with the German Baroque violinist Christoph Poppen and soprano Monika Mauch. Based on the research of Prof. Helga Thoene, this is a unique interweaving of Bach's Partita in D minor for solo violin with a selection of Chorale verses crowned by the epic Ciaconna , in which instrumentalist and vocalists are united.
The group continues in its quest to forge relationships with living composers, often in an orchestral context. In 1999, they premiered Miroirs des Temps by Unsuk Chin with the London Philharmonic Orchestra and Kent Nagano. In the same year, James MacMillan's Quickening, commissioned jointly by the BBC and the Philadelphia Orchestra, was premiered at the BBC Proms. With Lorin Maazel and the New York Philharmonic, they performed the world premiere of Stephen Hartke's 3 rd Symphony and they recently collaborated with the Munich Chamber Orchestra with a new work by Erkki-Sven T üü r. In 2007 they joined forces with the Dresden Philharmonic Orchestra to premiere Nunc Dimittis by the Russian composer Alexander Raskatov, also recording this for ECM.