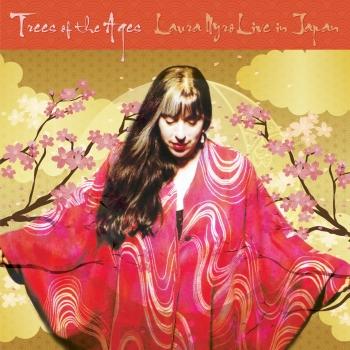 Trees of the Ages: Laura Nyro Live in Japan (Remastered)

Laura Nyro
received a long awaited induction into the Rock-and-Roll Hall of Fame. One of the great singer-songwriters of our time, she released 22 critically acclaimed albums and wrote literally dozens of songs that have become firmly fixed in the popular music canon, from her debut in 1966 at the age of 19 to her untimely death in 1997. Her music wasn’t just widely recorded, it also catapulted other performers up the charts, among them The 5th Dimension (Stoned Soul Picnic, Sweet Blindness, Wedding Bell Blues), Blood, Sweat & Tears (And When I Die), and Three Dog Night (Eli’s Comin'). Barbara Streisand charted three consecutive times with Nyro’s songs. Weaving together a combination of pop, jazz, gospel, rhythm and blues, rock, and soul, Nyro produced something genuinely rare in the world of pop music: an original sound, fired by a unique vision. Her influence on generations of performers is undeniable and may be one of her greatest legacies. Iconic singer-songwriter Elton John summed up Nyro’s influence on his own work: “The soul, the passion, just the out-and-out audacity of the way her rhythmic and melodic changes came were like nothing I’d ever heard before.” Laura’s passing at age 49 robbed popular music of one of its purest lights.