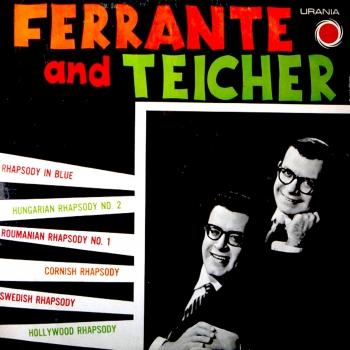 Arthur Ferrante & Louis Teicher
two enterprising pianists, have fused their talents to produce a new commodity in the world of music and sound. They tailor a wide variety of concert, semi-classic, and pop compositions to their instruments, an on occasion, to ginger up pop selections, they even tinker with their instruments to produce novel sound effects. In serious repertory, however, they cut no capers. There they are noted for lucidity, precision, adaptability to many styles of music, and fingers that are fleet far beyond the ordinary. In the past ten years, they have come to be admired by countless thousands on nation-wide concert tours, on radio and TV, and on several notable record releases. Their clever arrangements of Brahms, Schumann, Debussy, Saint-Saens or of Porter, Kern, etc. endow familiar compositions with new vitality and enriched sonorities. As for the various ways in which they “prepare” the piano for pop programs, they justify their innovations by maintaining that historically “the piano contains its ancestors — harp, lute, dulcimer, zither, clavichord, and harpsichord,” and they are only attempting to bring these submerged sonorities to the fore. Although only in their thirties, Ferrante and Teicher have appeared as performers of serious music with the New York Philharmonic, Rochester Symphony, Detroit Symphony, Toledo Symphony, and New York City Symphony Orchestras. On the air waves, in serious as well as light classics, listeners have heard them regularly on ABC’s Piano Playhouse, NBC’s Eddie Dowling Show, or NBC’s Carnation Hour. Sophisticated m.c.’s such as Steve Allen, Garry Moore, Ernie Kovacs, and Mitch Miller have been proud to introduce them on their TV shows. In all these media, they have received rave notices for their through mastery of their craft, their versatility, and the artistic rapport which transforms them into a single artistic entity. In their arrangements and in their piano style, they provide excitement in the modern manner. They are ideally suited to the diablerie which is the breath of life to most rhapsodies.