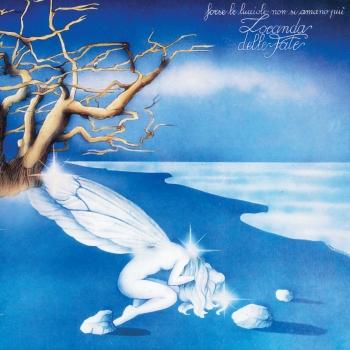 Locanda Delle Fate
With a rich twin guitar and twin keyboards line-up and an excellent musicianship, Locanda delle Fate from Asti went totally unnoticed at the time their only LP came out on Polydor, arriving too late for the declining Italian prog movement.
It's a pity, because their rich, symphonic blend of progressive rock is well inspired and original, despite the obvious influences by the romantic side of English prog bands. Forse le lucciole non si amano più has lately become an example of the Italian classical-oriented prog, with the nice interplay between the multiple keyboards, dreamy atmospheres and good vocal parts, like in the long title-track, Profumo di colla bianca or the closing Vendesi saggezza.
The Live CD, recorded in 1977 and released in 1993, can interest the group fans, though it only contains an unreleased track, La giostra, the other six cuts coming from the LP. It has a good bootleg-like recording quality.
Disappointed by the lack of interest, the band released two more commercial singles in 1978, with the line-up reduced to a five-piece, and in 1980 under the name La Locanda, before disbanding.
The group reunited in 1996 with five of the seven original members (less singer Sasso and keyboard player Conta), and they released a new album in 1999, Homo homini lupus, an 11-track work, good but more oriented towards a classy pop and very far from the dreamy sound of their great album.
Guitarist Ezio Vevey took part in 2002 in the rock-opera La rete di Ulisse with the group Genoma, that also included Nik Comoglio (keyboards), Cyrus Scognamiglio (bass) and Steve Abrate (drums). The other guitarist Alberto Gaviglio had also issued a solo single in 1981, Cosa resterà/Vacci piano (Fonit Cetra SP 1754).
In 2006 the group reunited again to work on a new album, closer to the style of their 1977 LP, but nothing came out of those sessions and they disbanded soon.
Only in 2010 the name Locanda delle Fate has been finally revived for some concerts, with a line-up comprising the original members Leonardo Sasso, Oscar Mazzoglio, Luciano Boero and Giorgio Gardino along with guitarist Massimo Brignolo and keyboardist Maurizio Muha.
2012 saw the release of a CD entitled The missing fireflies, containing some new studio recordings of old tracks along with an excerpt from a 1977 concert, and an LP called Live in Bloom, recorded during the 2010 reunion. Another album including new tracks along with some old unreleased recordings is Lucciole per sempre, issued in 2018.