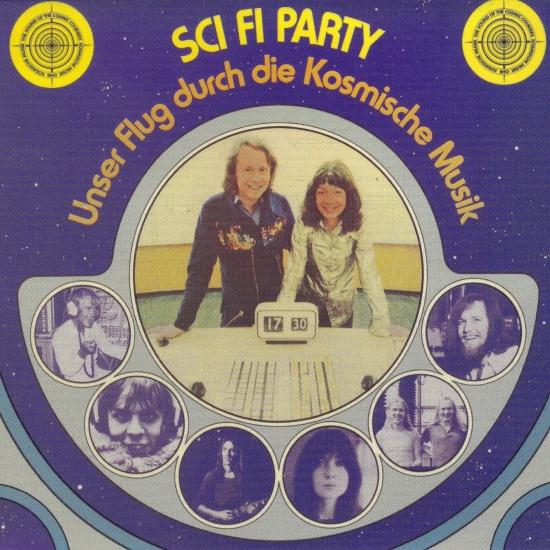 Ladies and gentlemen… Our next stop will be the to visit the "Sci Fi Party" on route through the cosmos of our minds. "Sci Fi Party" was another chapter in the cosmic music voyage from the collaborative forces of Germany's Schulze, Gottsching, Grofkopf, Dollase and Dierks. This is progressive space like you have never heard before and for those who are familiar with the "Galactic Supermarket" will know just what I mean. Juxtpose Gottsching's guitar expressions with the space keyboard talents of Klaus Schulze and fellow cosmonauts and you have a recipe for space travel. Ever since I found "Galactic Supermarket" I have been addicted to the music of the COSMIC JOKERS discovering their musical genius. "Sci-Fi Party" is a wonderful headphone experience for those late night cold winter evenings alone in your upper flat. Also the cosmic musical theme established on their first album is once again re-introduced to sustain the continuity of their cosmic musical story line. Creative and highly imaginative.
Dieter Dierks, bass
Jürgen Dollase-keyboards, vocals
Manuel Göttsching-electric, guitar
Harald Großkopf, drums
Klaus Schulze, synthesizer
Digitally remastered 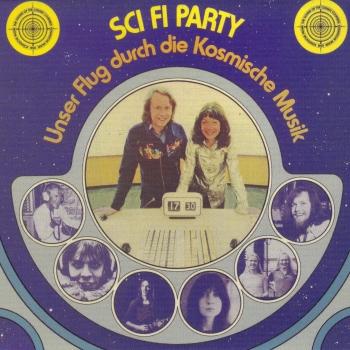 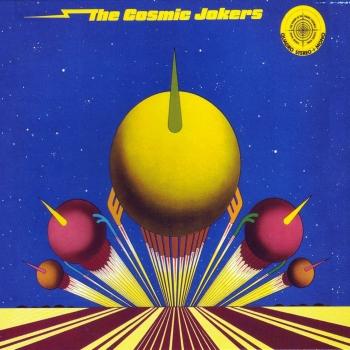 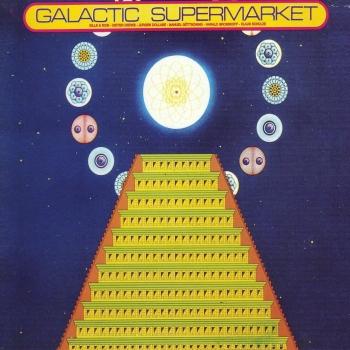 The Cosmic Jokers
In 1972, Rolf Ulrich Kaiser founded "Die Kosmischen Kuriere" where will be signed all the Cosmic jokers albums. The COSMIC JOKERS is not really a band but a reunion of several German musicians and personalities from the 70s psychedelic and esoteric philosophies (the mystic Sergius Golowin in the Lord Krishna project or the gipsy folk artist Walter Wegmuller in Tarot). The interest of this side project was to create a cosmic music with a virtual musical tribe to develop the world consciousness thanks to LSD. The COSMIC musical team gathered around the same message a bunch of well known musicians from the Berlin scene (Klaus Schulze, Manuel Gottsching...). The COSMIC JOKERS is an extreme musical trip, a unique adventure throw time and space. The music is for a large part improvised with proto-electronic gadgets combined to bluesy & spacey musical sentences built around the talented Manuel Gottsching's electric guitar style (always spacey and bluesy). This is real German acid music, a 'music of paradise', transcending music, breaking of the materialistic world, a protest against the reality. The combination of acid, music and fun acted as a catalyst for Kaiser's visionary powers.
was never an ensemble, per se; its members did not play together as Cosmic Jokers, and in fact were not even asked to join the group. Their music was created from sessions put together by Rolf-Ulrich Kaiser and Gille Lettman in early 1973. He arranged for several acid parties to be held at the sound studio owned by Dieter Dierks, where musicians were offered drugs in exchange for recording tracks. Participants included Manuel Göttsching and Klaus Schulze of Ash Ra Tempel, Jurgen Dollase and Harald Grosskopf of Wallenstein, and Dierks. Prior to this, all of the musicians had been involved with Kaiser's Cosmic Couriers label.
Kaiser took the tapes from these sessions, edited and mixed them with Dierks, and released them on his label, Kosmische Musik, complete with the musicians' pictures on the LP sleeve, without asking for their permission. Göttsching did not find out about the record release until he heard it playing in a record store in Berlin and asked the counter help what was playing. Kaiser released five records under the name Cosmic Jokers in 1974, one of which was actually a label sampler and a second, Gilles Zeitschiff, consisted of Kaiser's then-girlfriend Gille Lettmann speaking over sounds taken from prior label releases. While none of the musicians were happy with the recordings, Schulze was so angry after the release of Gilles Zeitschiff that he sued Kaiser. In 1975, Kaiser was forced to discontinue and withdraw the recordings, and he fled the country over the affair, abandoning the record label over the threat of impending legal problems.