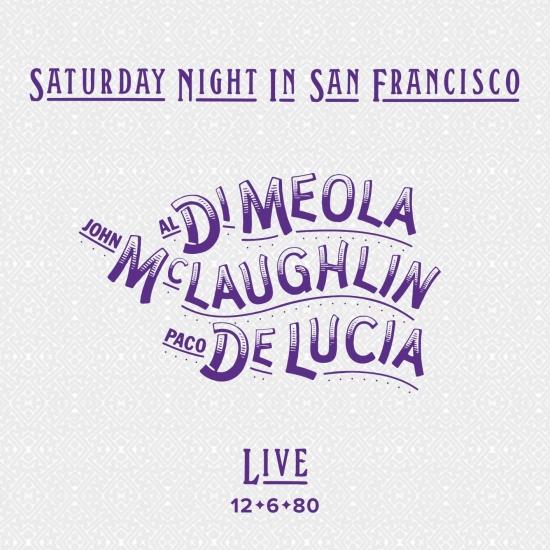 Friday Night In San Francisco is a 1981 live album by Al Di Meola, John McLaughlin and Paco de Lucia. It was described by jazz author and critic Walter Kolosky as "a musical event that could be compared to the Benny Goodman Band's performance at Carnegie Hall in 1938...(it) may be considered the most influential of all live acoustic guitar albums. All the tracks except "Guardian Angel" were recorded live at The Warfield Theatre on December 5, 1980 in San Francisco.
This debut recording on Columbia Records became a landmark recording that surpassed the 2 million mark in sales. The three virtuosos in the Trio toured together from 1980 through 1983.
Working with hours of original 16-track live session tapes, Al Di Meola and his team have brilliantly curated this musical tour-de-force, bringing to life for the first time on HIGHRESAUDIO the explosively virtuosic final performance of Di Meola, John McLaughlin, and Paco De Lucia at the Warfield Theater in San Francisco, December 6, 1980. In the exclusive essay by music historian Charles L. Granata, Di Meola says of that final night: "It's exciting because the audience was right there with us, savoring every single note of music. And, we were ripping. It was crazy good!"
Impex worked carefully with Di Meola, mixing engineer Roy Hendrickson (SPIN Studio), and mastering engineer Bernie Grundman to recreate the magic of Friday Night In San Francisco so these never-before-released solos and trios burst out of your system with striking clarity, dynamics and technical brilliance. "Crazy good," indeed.
Ah the Mediterranean... Filled with fine foods, wines, beautiful people, and the inspirational style of music that descended upon the able fingers of these guitar giants. This is by far one of the hottest guitar albums ever. Al Dimeola, John McLaughlin, & Paco Delucia play classical guitars (the kind with the nylon strings) in a flamenco / jazz style that will blow your socks off!
"Loose and spontaneous, this (mainly) live album is a meeting of three of the greatest guitarists in the world for an acoustic summit the likes of which the guitar-playing community rarely sees. Broken up into three duo and two trio performances, Friday Night in San Francisco catches all three players at the peaks of their quite formidable powers." (AMG)
Al Di Meola, classical guitar
John McLaughlin, classical guitar
Paco de Lucía, classical guitar
Recorded live at the Warfield Theatre, San Francisco, 5 December 1980.
Digitally remastered by Bernie Grundman and Bob Donnelly 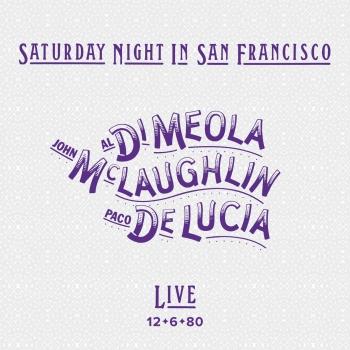 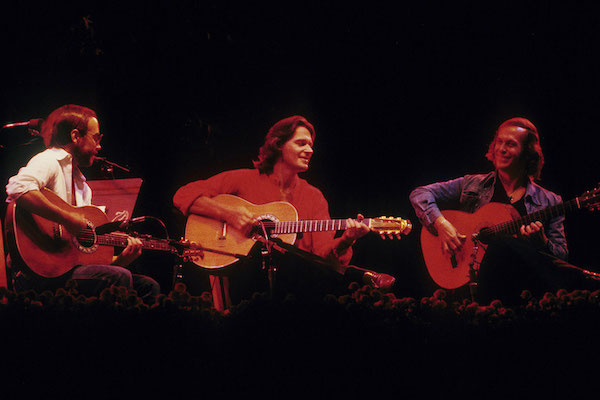 Paco de Lucia
was a Spanish flamenco guitarist, composer and producer. A leading proponent of the New Flamenco style, he helped legitimize flamenco among the establishment in Spain, and was one of the first flamenco guitarists to have successfully crossed over into other genres of music such as classical and jazz. De Lucia was noted for his fast and fluent finger style runs. His collaborations with guitarists John McLaughlin and Al Di Meola saw him gain wider popularity outside his native Spain.
Al Di Meola
is an acclaimed jazz fusion and Latin jazz guitarist, composer, and record producer. With a musical career that has spanned more than three decades, he has become respected as one of the most influential guitarists in jazz to date. Albums such as Friday Night In San Francisco have earned him both artistic and commercial success with a solid fan base throughout the world. A prolific composer and prodigious six-string talent, Di Meola has amassed over 20 albums as a leader while collaborating on a dozen or so others.
John McLaughlin
is an English guitarist, bandleader and composer. His music includes many genres of jazz and rock, which he coupled with an interest in Indian classical music to become one of the pioneering figures in fusion. In 2010, guitarist Jeff Beck called him "the best guitarist alive." In 2003, McLaughlin was ranked 49th in Rolling Stone's "100 Greatest Guitarists of All Time." After contributing to several key British groups of the early sixties and making his first solo record, he moved to the US where he played with Tony Williams' group Lifetime and then with Miles Davis on his landmark electric-jazz fusion albums: In A Silent Way, Bitches Brew, A Tribute To Jack Johnson and On The Corner.