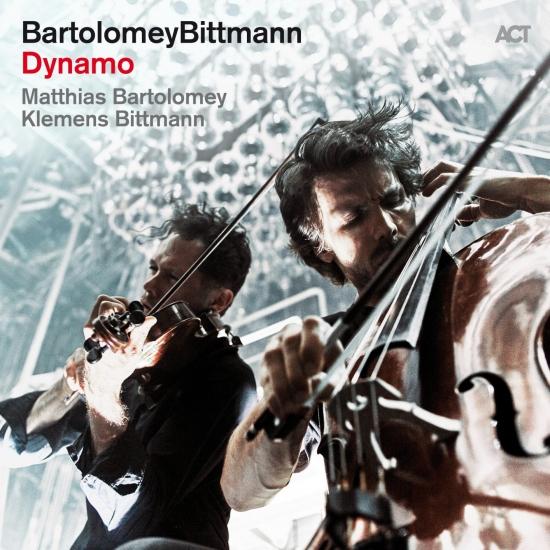 "It is very rare to hear string players relishing the groove quite so joyously. BartolomeyBittmann embody the musical virtues of unbridled playfulness and rhythmic radicalism, and they deploy them with an ease that is not normally associated with classical instruments." (Wolfgang Muthspiel)
An album that throws wide the gates to a listening experience as wonderfully atmospheric as it is deep: with their third album, "Dynamo", BartolomeyBittmann have conceived a daring new musical work that - once again - entices the listener to join them in a fascinating world of sound.
One thing must be said about this duo: narrowmindedness and undue attachment to tradition have no place whatsoever in its musical ethos. Matthias Bartolomey (cello) and Klemens Bittmann (violin & mandola) have their own ideas and are blazing their own musical trail, a path leading well away from the familiar and the commonplace. It’s been several years since they joined forces to compose and develop a contemporary repertoire for their characteristically classical instruments. Now, with "Dynamo", the duo has arrived at the heart of their very own individual sound.
The two Austrians have worked together as a duo since 2012. Violinist Klemens Bittmann has always chosen a path close to crossover. After classical studies at the University of Music and Performing Arts Graz, he studied jazz violin with Didier Lockwood in Paris. His work in collaboration with the accordionist Klaus Paier, with the guitarists Alegre Correa and Wolfgang Muthspiel, the trio folksmilch, and as a duo with the woodwind player Georg Gratzer, have been the determinants of Bittmann's artistic career. He also has a teaching post at the University in Graz. As an arranger he was responsible for the groundbreaking "Celebrating The Mahavishnu Orchestra" recording by radio.string.quartet.vienna and released by ACT. Cellist Matthias Bartolomey’s career to date has been more firmly anchored in Western classical music. As a graduate of the University of Music and Performing Arts Vienna and of the illustrious Mozarteum in Salzburg, he has worked with the Vienna State Opera Orchestra/Vienna Philharmonic, the Chamber Orchestra of Europe and the Mahler Chamber Orchestra. Since 2010 he has been principal cellist of Concentus Musicus Wien, founded by Nikolaus Harnoncourt. BartolomeyBittmann is a project close to the hearts of both players.
Their first two releases, "Meridian" (2013) and "Neubau" (2015), were hugely persuasive as a result of their innovative approach, a burgeoning wealth of ideas, and from the duo’s way of being so multi-layered and self-sufficient. Numerous concert appearances have taken them all across Europe as far as Russia, to Iran and the USA, and even to Kenya and Japan. With "Dynamo", BartolomeyBittmann have established a definitive and unique sound, which is theirs and theirs alone.
Matthias Bartolomey and Klemens Bittmann allow their melodies to flow through wildly divergent moods and musical landscapes, rendering futile all attempts to stylistically pinpoint their musical language. They can change their intensity at a moment’s notice with sensitivity and precision, molding their pieces into absorbing stories told with overarching suspense and ever-changing moods. They combine the energy of rock - including that of the harder variety - with the elegance of chamber music, the inventive joy of jazz, and the emotional depth of singer-songwriters, dipping briefly into folk music now and then while managing to pay homage to their classical roots… all this is testament to the duo’s special grasp of how music can be made into a truly enthralling, deeply moving experience.
The duo’s pieces unfold in tones that are both unusually varied and lyrical, even magical - something in the music plants multicolored images in the mind, leaving lasting impressions behind. At one moment the listener is captivated by the beauty and gentleness of the sound; in the next the power of the music takes one’s breath away. The immense playfulness of still other passages is simply astounding. Bartolomey and Bittmann’s pieces dance, they celebrate; they give themselves up to sweet melancholy; they groove, they strive to penetrate the mysterious… and they dream.
"Dynamo"decisively answers the question of how BartolomeyBittmann has come to stand in its current position. The two musicians leave no doubt as to their right to a place with the cream of Austria’s music scene, as well as to the excellent international reputation that they enjoy. It’s a real pleasure to take an aural stroll through the duo’s imagination; their music manages to strike just the tone that opens directly the floodgates of the soul, inviting the listener to be completely bewitched by their presentation and their warm, enveloping timbres from the first moment on.
Matthias Bartolomey, cello
Klemens Bittmann, violin & mandola
Recorded and mixed by Olaf Schuberth, Vienna, January & September 2018
Mastered by Mischa Janisch at Sunshine Mastering, Vienna
Produced by BartolomeyBittmann and Olaf Schuberth 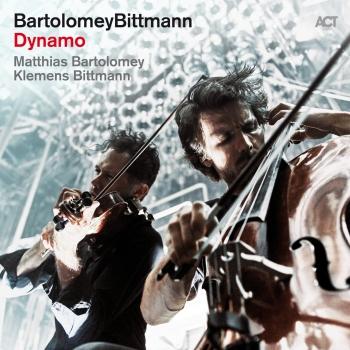 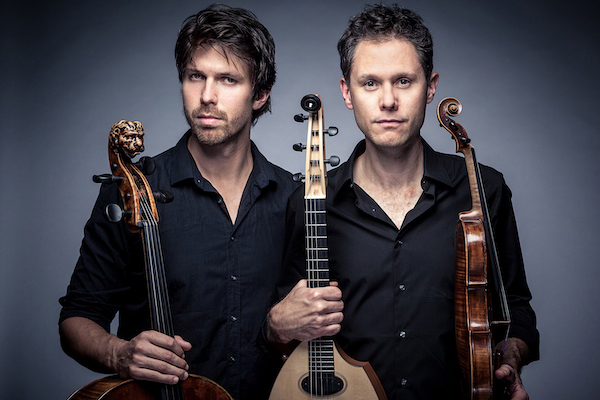 Matthias Bartolomey
was born in 1985 and started to play the cello at the age of seven. He took his first cello lessons with his father and became a student of Prof. Valentin Erben at the University for music and performing arts in Vienna in 1995. From 2007 he studied with Prof. Clemens Hagen at the Mozarteum in Salzburg where in 2010 he completed his studies with a Masterdegree.
He is prize winner of the Austrian youth competition „Prima la musica“, the competition „Musica Juventutis“ by the Wiener Konzerthaus and winner of the 2nd prize at the International Brahms competition in Pörtschach 2006. In 2009 he received the „Erich Schenk-Preis“ for young musicians by the Mozartgemeinde Wien.
Numerous projects as soloist and chambermusician brought Matthias to Germany, Italy, Slovenia, France, Great Britain as well as China, Japan and the USA.
As soloist in particular he played with the „Wiener Kammerorchester“, the „Wiener Kammerphilharmonie“, the “Symphony in C”(Boston), and the Symphony Orchestra of the Mozarteum University.
As a Orchestra musician Matthias repeatedly played at the Vienna Stateopera, the Vienna Philharmonic, the Vienna Symphony, the Chamber Orchestra of Europe and the Mahler Chamber Orchestra.
Since 2010 he is solo cellist with Nikolaus Harnoncourtś “Concentus Musicus Wien”.
Matthias also attended masterclasses with Janos Starker, Patrick Demenga, Christoph Richter, Heinrich Schiff and the Alban Berg Quartett. In 2012 together with the Jazzviolinist and Mandolaplayer Klemens Bittmann he formed the Duo BartolomeyBittmann - progressive strings vienna which has become a main focus in his musical career.
With exclusively original compositions they are leading their instruments out of their deeply rooted classical tradition to new musical pathways.
With the spontaneity and improvisation of Jazz , the music includes heavy groove and rock elements as well as intimate ballads and fast uptempo compositions.
Since 2017 Matthias is fucusing on wirting new and original music for cello with an emphasis on developing and advancing new playing techniques.
Matthias is playing a cello by David Tecchler (1727).
Matthias Bartolomey is exclusively playing strings by LARSEN STRINGS.
Klemens Bittmann
Born in Graz, Austria, Klemens Bittmann studied classical violin at the University of Music and Arts in Graz and Jazz violin at the Didier Lockwood Music Center in Paris.
Back in Austria he founded the bands Beefólk, folksmilch, Radio String Quartet and BartolomeyBittmann which already are major acts in the world-music jazz-scene in Austria. In these groups he plays violin and mandola as well as he uses his composing and arranging abilities. A large number of concert tours from Austria and Germany to Iceland, USA, Netherlands, Iran, Norway, Malta, Kenia, China, Hong Kong and Russia. Besides these two projects exist collaborations with Klaus Paier (Klaus Paier Trio and String quartet), Wolfgang Muthspiel (Beefólk feat. Wolfgang Muthspiel), Gerald Preinfalk (Tangogo and Moskau52), Alegre Correa, Alex Deutsch, Louie Austen, Thomas Mauerhofer, Christian Bakanic, Wolfgang Temmel (Dear_GRZ), Georg Gratzer, radio string quartet (Mahavishnu project), Drew Sarich & Dead Poets String Quartet (“ugly Nina” project), Stefan Heckel, Helgi Jonsson, Broadlahn, Mercedes Echerer, Sarah Grubinger, Ursula Strauss, Alexander Tschernek, Olivier Tambosi and since 2007 with the Austrian pop singers Anna F, Maria Bill, Andrea Eckert, Paul Gulda, Erich Oskar Hütter, Cornelius Obonya and Valerie Sajdik.
String arrangements for: Boy, Andreas Bourani, Helgi Jonsson, Conchita Wurst, Sarah Nardelli, AnnaF, Rita Chiarelli, Louie Austen, Sarah Grubinger, Broadlahn, Valerie Sajdik and many others.
2009 Klemens composed the studio solo-album „leaving velidhu“.
2010 he concepted together with the classical singer Ulfried Staber the project „Frauendienst“ where the lyrical content came from the austrian minnesänger „Ulricht von Liechtenstein“.
2011 Klemens developed on request of the „liquid music“ festival in „Judenburg“ the sound performance „from the distance“ and 2012 the live performance „en passant“.
2014 Zbigniew Seifert Jazz Violin Competition finalist.
Klemens has always been an in demand studio string-arranger and musician for various projects.
2014 release of the first BartolomeyBittmann album „Meridian“
2015 release of the second BartolomeyBittmann album „Neubau“ at Preiser Records Vienna.
Klemens Bittmann plays a violin by Josephus Pauli (Linz, 1817), a mandola by Markus Kirchmayr (Natters in Tirol, 2004) and Thomastik-Infeld Vienna strings.