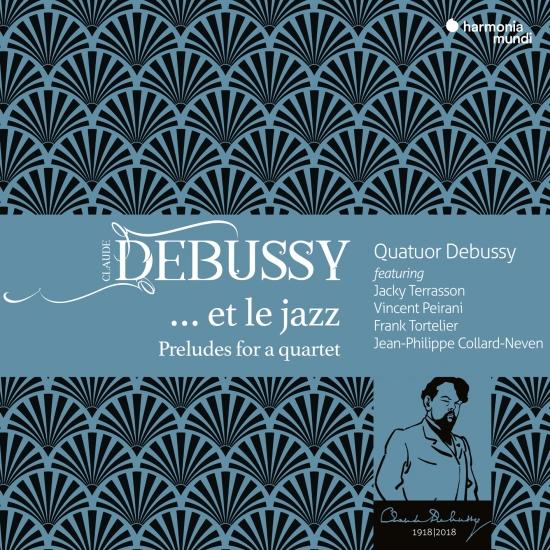 A century after his death on 25 March 1918, many harmonia mundi artists are eager to pay tribute to Claude Debussy, the magician of melody and timbre, the great ‘colourist’ and father of modern music.
There was also a wish to honour the composer of ‘Pelléas’ as one of those creative artists who, long before Louis Armstrong and Bill Evans, had a determining influence on certain harmonic colours of jazz.
Let us therefore salute the initiative of the appropriately named Quatuor Debussy who, with the friendly collaboration of leading jazz personalities, have revisited the ‘Préludes’ in their own way.
Jean-Philippe Collard Neven, piano
Vincent Peirani, accordion
Franck Tortiller, vibraphone
Jacky Terrasson, piano
Quatuor Debussy 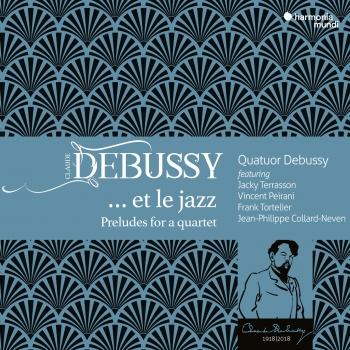 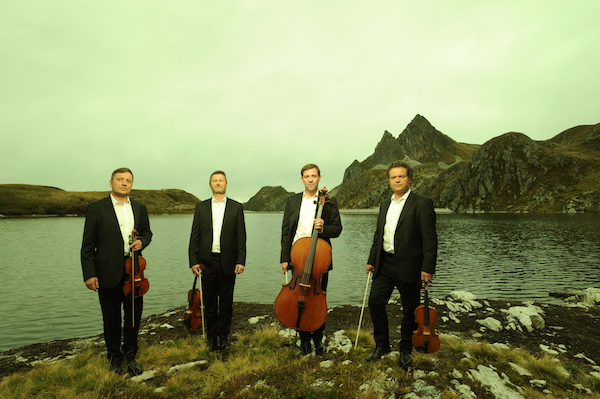 Quatuor Debussy
Through its passionate commitment to speak in a unique voice, eschewing the creation of an international quartet sound, the Debussy Quartet has established its reputation as one of the finest quartets touring and recording today. Formed in 1990 by a group of young musicians studying at the Conservatoire de Lyon, France, the quartet has gained international renown for its exciting performances and award-winning recordings. In major concert halls from New York to Tokyo they perform a wide range of works, and are perhaps most well known for their devotion to the French repertoire. The quartet’s performances of the Ravel, Debussy and Fauré quartets are legendary, and these four musicians continue to create new audiences for works of their countrymen such as Lalo, Lekeu, Milhaud and the late romantic composer Ermand Bonnal.
Winners of the Evian International String Quartet Competition, the Debussy Quartet performs about 80 concerts a year in Europe, Asia, and North America. They are regular guests at distinguished concert halls (Concertgebouw in Amsterdam, Auditorio Nacional de Musica in Madrid, Grand Theatre in Geneva, Konzerthaus in Berlin, Théâtre du Châtelet, Musée du Louvre in Paris) and are also heard at many of Europe’s finest festivals.
In addition to mixed chamber music with renowned colleagues, the quartet has embarked on an adventurous collaboration with the famed modern dance ensemble, Compagnie Käfig (choreographer Mourad Merzouki), for a new project in which they are incorporated as choreographed elements while performing on their respective instruments in concert with the dancers : Boxe Boxe ; following the success of this show, they are preparing Boxe Boxe Brasil…
The Debussy Quartet’s extensive discography includes the acclaimed Decca label release of the landmark Mozart Requiem recording, in the 1802 transcription by Peter Lichtenthal (about which a documentary film has also been made). The Arion label produced several volumes in the “French Music” collection (Bonnal, Ravel, Fauré, Witkowski, Lekeu) and the complete Shostakovich Quartets, among other works. The quartet’s mixed chamber music repertoire includes its highly regarded CD of the Brahms and Weber clarinet quintets with clarinetist Jean Francois Verdier and a highly acclaimed collaboration with the pianist François Chaplin in several Mozart piano concertos. In addition, their discography includes the complete works of Webern for string quartet (for Harmonia Mundi), which received the coveted « Choc » award of Le Monde de la Musique. In 2016, their new records are the Opus show’s soundtrack and the jazz album, Filigrane (for Radio France). They are currently preparing a new record of Marc Mellits’s quartets for 2017.
The Debussy Quartet is based in Lyon, France. Its members are the founders of “Les Cordes en Ballade” a chamber music festival and an academy of chamber music in the South of France, where they perform and teach each summer.