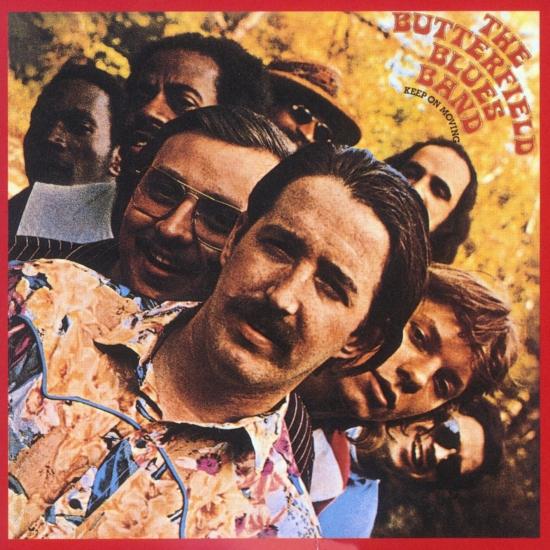 Info for Keep On Moving

By the end of 1968 Paul Butterfield was the only original member left of his band, as guitarist Elvin Bishop had left that year, along with keyboard player Mark Naftalin and bassist Bugsy Maugh. Naftalin was replaced by Ted Harris, Maugh by Rod Hicks, and Bishop by a young Howard 'Buzzy' Feiten. They joined Butterfield, drummer Phillip Wilson, and the three-piece horn section of David Sanborn (alto sax), Gene Dinwiddie (tenor sax) and Keith Johnson (trumpet).
Before they recorded together, the new line-up got to play at the Woodstock Festival, although their performance wasn't featured on the resultant film (they did appear on the soundtrack). Their new album came out in October '69, produced by Jerry Ragavoy. It continued in the direction of their last two albums, moving further away from pure blues and into soul territory. The horn section was used to full effect, and Buzzy Feiten proved himself perfectly capable of filling the shoes left by Mike Bloomfield and Elvin Bishop. The songwriting was also shared around the band, with two also contributed by Ragavoy, and a couple of covers.
„Released in 1969, Keep on Moving was the fifth Elektra release by the Paul Butterfield Blues Band. During a four-year span the group's namesake and leader was the only original member left from their first album in 1965. Morphing in a similar direction as Michael Bloomfield's Electric Flag, this edition of the Butterfield Blues Band prominently fronted the horn section of David Sanborn on alto sax, Gene Dinwiddie on tenor, and Keith Johnson on trumpet. The band's direction was full tilt, horn-dominated soul music, first explored on The Resurrection of Pigboy Crabshaw, which took them farther away from the highly regarded gritty blues experimentation of East-West and the duel guitar attack of Michael Bloomfield and Elvin Bishop. This album also signaled the final appearance of AACM and Art Ensemble of Chicago drummer Phillip Wilson, whose Butterfield swan song was the collaboration with Dinwiddie on the hippie gospel track 'Love March,' of which an appropriately disjointed live version appeared on the Woodstock soundtrack album. The difference between Butterfield's 1965 street survival ode 'Born in Chicago' ('My father told me 'son you'd better get a gun') and 'Love March' ('Sing a glad song, sing all the time') left fans wondering if the band had become a bit too democratic. However, on cuts like 'Losing Hand,' some of the band's original fervor remains. Butterfield's harp intertwining with the horn section sounds like a lost Junior Parker outtake and the Jimmy Rogers' penned 'Walking by Myself,' is the closest this band comes to the gutsy Windy City blues of its heyday. The remaining tracks aren't horrible, but tend to run out of ideas quickly, unfortunately making what may have been decent material (with a little more effort) sound premature. Butterfield would make a few more personnel changes, release one final disc on Elektra, Sometimes I Just Feel Like Smilin', and then dump the band altogether to embark on a solo career. In 2006, Sundazed released a High-Definition Vinyl LP version of Keep on Moving.“ (Al Campbell, AMG)
Paul Butterfield, harmonica, vocals, flute
Gene Dinwiddie, guitar, keyboards, tenor saxophone, flute, backing vocals
Howard 'Buzz' Feiten, organ, guitar, french horn, backing vocals
Keith Johnson, trumpet
Trevor Lawrence, baritone saxophone
Steve Madaio, trumpet
Ted Harris, piano
Jerry Ragovoy, piano
David Sanborn, alto saxophone
Rod Hicks, bass, cello, backing vocals
Fred Beckmeier, bass
Phillip Wilson, drums, backing vocals
Recorded at the Hit Factory, New York
Engineered by Eddie Youngblood, Joe Zagarino
Produced by Jerry Ragovoy
Digitally remastered