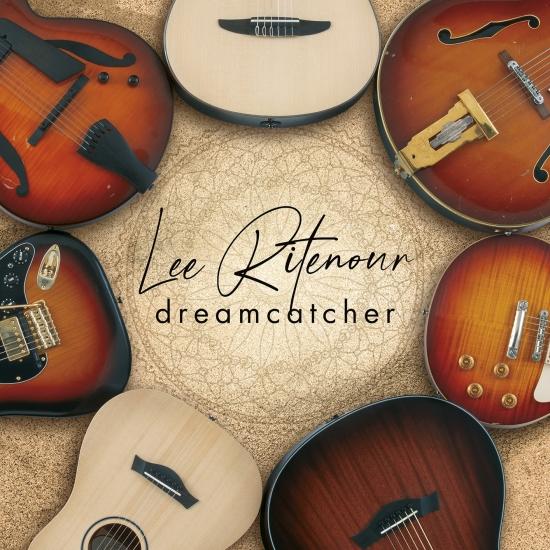 GRAMMY winning guitarist Lee Ritenour will release ‘Dreamcatcher,’ his first studio album in five years. Weaving tapestries of instrumental guitar and conjuring eclectic moods, the 12 tracks of ‘Dreamcatcher’ rank amongst the most melodic and tinglingly beautiful in Ritenour’s catalogue. But there’s a power and purpose here, too, hinting at the darker circumstances that sparked this new record. “Our house and my studio in Malibu, California burnt down in 2018,” Ritenour recalls. “About 100 of my guitars went up in the fire, plus 40 amps, lots of music, the history of my whole career, pretty much. A week after the fire, I went to the hospital, which I’d never had to do before, for surgery to replace an aortic valve. So those incidents and the support from my family and friends absolutely went into this music. Making this record was a life-saver for me.”
For Lee Ritenour, there aren’t many ‘firsts’ left to achieve. During his dazzling five-decade career, the fabled LA guitarist has taken his music to the outer limits, alighting on every genre and occupying every position in the rock ‘n’ roll firmament. He’s been an enfant terrible of ’70s fusion, a crossover star of the ’80s pop chart, an honorary exponent of Brazilian jazz, and the fingers behind ’90s supergroup, Fourplay. Ritenour’s accolades include: 45 albums,16 Grammy nominations, Alumnus of the year at USC, Los Angeles’ Jazz Society Honoree (2019), plus thousands of sessions with legends such as Frank Sinatra, Pink Floyd, B.B. King, Tony Bennett, among others.
And yet, when he checks the rear-view mirror, the 68-year-old acknowledges he’s never made a record like ‘Dreamcatcher.’ “People have been telling me for years: ‘Rit, you gotta make a solo guitar record.’ In the past, I’ve always been the band guy, the ensemble guy, the collaborative-guitar-player guy. So this was the one project I hadn’t done. And this year, I knew it was time.”
‘Dreamcatcher’ might have been born from personal challenges, but the record took shape against the global tragedy of COVID-19. Ritenour had already written several key tracks before shutdown. But as he settled into the makeshift studio at his new home in Marina Del Rey, equipped with little more than seven guitars, a computer interface and good intentions, the guitarist let the context flood into the music he was tracking. “It was an important album for me,” he notes. “Especially now, with everything going on in the world.”
Even without lyrics, every track tells a story. Take the molten blues licks of “Abbot Kinney”, named for the fabled boulevard in Venice, California. “One day when everything was shut down,” says Ritenour, “I drove my bike there and was just devastated to find it completely empty. But then I heard this rock guitar start up. I don’t know if it was a kid, but somebody nearby had just turned it up to 10 and said, ‘Fuck it, I’m gonna have some fun.’ It brought a huge smile to my face and inspired me to write that song on my Les Paul.”
Likewise, anyone living through the age of COVID-19 will feel a deep affinity with “2020”: a three-part symphony in which Ritenour takes the pulse of the times. “The three parts were a reflection of what was going on this year,” he nods, “when all of a sudden everybody’s life shut down. I was thinking about the young musicians that were out of work – and people in every walk of life.”
Elsewhere ‘Dreamcatcher’ delves beyond the pandemic. While Ritenour strived to switch up musical styles – from the title track’s dovetailing classical guitars to the Taylor baritone that drives “Starlight’s” tumbling folk, and the mad scientist multi-tracking of “Couldn’t Help Myself” – he also ran the gamut of mood. “Because even I get tired,” he reasons, “of solo guitar albums when it pretty much all sounds the same.”
As such, “For DG” salutes the harmonic sensibilities of the great producer, pianist, and long-time comrade, Dave Grusin. But it couldn’t be further from “Charleston”, whose mellow slink is laced with bittersweet thoughts on the ebb and flow of US race relations. “A few years ago, I played in Charleston, South Carolina,” recalls Ritenour, “and it was charming and the people were warm, and it was a very mixed, soulful audience. Charleston has a history of the beginnings of slavery, but this was modern day Charleston, y’know? But then, a few years later, I’m writing this tune while watching the continuation of the struggle. As musicians who travel all over the world, we go, ‘What? This shit is still going on in the US?’ So it was appropriate to dedicate that song to Black Lives Matter.”
‘Dreamcatcher’ not only confronts the here-and-now: it also slips back into Ritenour’s rich history. Long-standing fans will recognize “Morning Glory Jam” as a rework of the guitarist’s classic 1977 tune. “On 2015’s A Twist Of Rit, I had revisited a lot of older material, so I wanted to keep this record fresh. But one day, I remembered when I did sessions for Barry White and how there had been four or five guitar players all playing these incredible rhythm parts. That’s the kind of groove I had in my head for this new version of Morning Glory.”
Collaboration might be a constant, but in a career full of left-turns, ‘Dreamcatcher’ is another thrilling detour for Lee Ritenour. Both by necessity and design, this latest album represents music in its purest form: one man, channelling his headspace and the history unfolding around him, using the instrument that has sustained him all these years. There is a first time for everything and there has never been a better time for ‘Dreamcatcher.’ “I’ve never done anything like this before and it’s an important missing piece in my guitar history. It was inspiring and it was meant to happen this year, in these times – after a lifetime of playing the guitar,” he considers, “this project reaffirmed just how much I love the guitar.”
Lee Ritenour
Note: this album consists of different sampling rates. 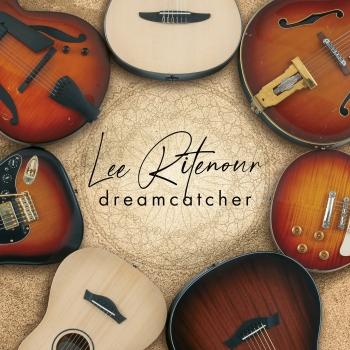 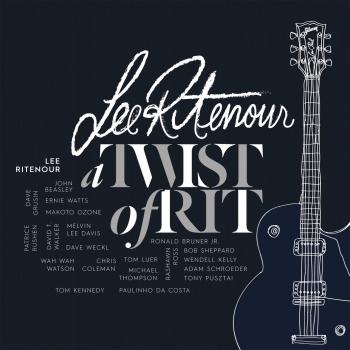 A Twist Of Rit (Remastered) 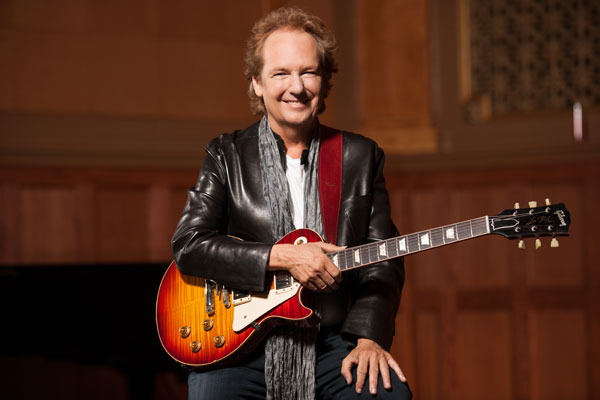 Lee Ritenour
born Lee Mack Ritenour on January 11, 1952 in Los Angeles, CA, has maintained a delicate balance between the individual creative vision and the group dynamic, since the beginning of his career. He did his first session work in the late ’60s with the Mamas and the Papas, who dubbed him Captain Fingers for demonstrating incredible dexterity while still in his teens. Since his early recordings in the 1970s, he has earned a GRAMMY Award and 19 GRAMMY nominations, numerous #1 spots on guitar polls, a Lifetime Achievement Award from the Canadian SJ Awards, and a prestigious “Alumnus of the Year” Award from the University of Southern California. He has recorded more than 40 albums that have yielded 35 chart songs. As a young guitarist, he put his combination of diverse musical styles and brilliant technical chops to work on more than 3,000 sessions with a broad spectrum of artists, and was a founding member of Fourplay, which is considered the most successful group in contemporary jazz.
Lee celebrated five decades as a guitarist in 2010 with the release of 6 String Theory, which features Steve Lukather, Neal Schon, John Scofield, Slash, Mike Stern, George Benson and B.B. King. The album also introduced Andy McKee, Joe Robinson and Guthrie Govan. The record was in conjunction with his first multi-national 6 String Theory Competition, sponsored by Yamaha, Berklee College of Music, Montreux Jazz Festival, Blue Note Tokyo, Crown of the Continents Guitar Workshop and Festival, Monster, Premier Guitar, Jazz Monthly, Music Connection, Concord Records and D’Addario.
The Six String Theory competition continues to grow, and has now expanded to include a Rhythm Section competition for Piano, Bass and Drums. In 2012, the Grand Prize winners were honored to appear with Lee on Rhythm Sessions, which also features luminaries such as Chick Corea, George Duke, Stanley Clarke, Dave Grusin, Marcus Miller and many others. The 2014 winners will also perform with Ritenour during his concert at the Montreux Jazz Festival, which will also be filmed in HD. Additional prizes awarded include four Berklee College of Music scholarships. The guitar finalist will record on Ritenour’s forthcoming 2015 Concord release, A Twist of Rit, and will also compete for a deal with Concord Records, plus Yamaha instruments and endorsements will be awarded as well as Crown of the Continent Guitar Workshop & Festival Scholarships and more. The competition which debuted in 2010 with the release of Ritenour’s all-star guitar recording 6 String Theory, has become a highly anticipated staple for aspiring musicians of the guitar, bass drums and piano/keyboard, providing them with professional and recording opportunities, educational scholarships, mentoring and prizes.
“When I first started this competition it was my hope it would grow to become a valuable entity that would have the support of so many established musicians in mentoring aspiring ones,” says Ritenour. “In four short years we have reached incredible goals and I couldn’t be more thrilled and grateful to have so many artists be part of this extraordinary musical process and journey.”