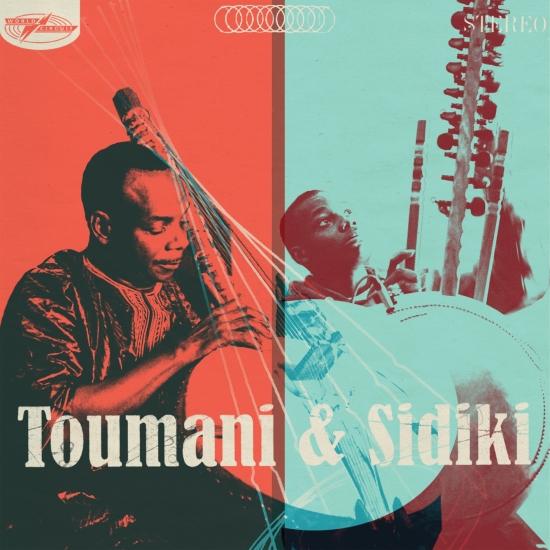 World Circuit s Nick Gold produced Toumani & Sidiki with engineer Jerry Boys (Ali Farka Touré, Buena Vista Social Club, Orchestra Baobab), a longtime collaborator, and with Lucy Duran, producer of Toumani s previous albums, as co-producer. The album is a set of unaccompanied kora duets, recorded live at London s RAK studios with little rehearsal (for some tunes, no rehearsal) and no overdubs. The album was captured in stereo, so Toumani is heard in the left speaker and Sidiki in the right.
The repertoire is based on a combination of obscure, almost forgotten kora pieces and a new look at some Mandé classics from Mali. "We re not going backwards, trying to play just how my father and grandfather did these songs, " says Toumani. "We have to do it our way. We re modern griots, we live in the city, we re connected to the world. Speaking of his desire to transmit ancestral repertoire in a contemporary manner, Toumani describes the album as the past meets the present for the future."
The album arrives in the wake of the hardline Islamic insurgency that threatened a ban on music in the north of Mali. With this album, Toumani aims "to show the positive side of Mali," to reassert the legacy of a country with access to untold musical riches. The songs are named, in griot tradition, to honor various people, places or events. The playing is dazzling. Toumani and Sidiki communicate telepathically, finishing of each other s musical sentences. The kora, often the quietest of instruments, is here played with verve, attack, groove, wit, swing, bounce, ecstatic excitement and exquisite intimacy and always with a flowing pulse and groove.
“Toumani is the world’s greatest living player of the kora.” (NPR)
Toumani Diabaté, Kora
Sidiki Diabaté, Kora