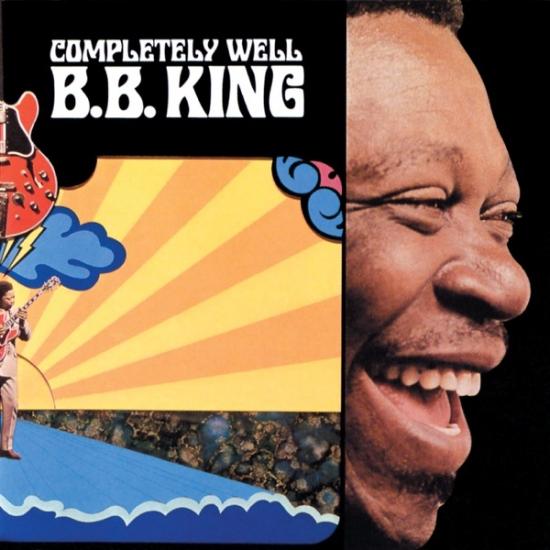 His 1969 breakthrough album, produced by Bill Szymczyk who went on to produce The Eagles. It was Szymczyk's idea to overdub strings to The Thrill Is Gone, the best-selling of all B. B. King's 45s. The slow and groovy million-seller, a twelve-bar blues, became his most prominent signature song, reaching position number three on the R&B charts, and climbing to number fifteen in Billboard's hot 100 Pop charts remaining there for two months. Compared to his earlier recordings for the Bihari Brothers, 'Completely Well' marks his step into the seventies, winning a new audience of white rock fans.
"Completely Well was B.B. King's breakthrough album in 1969, which finally got him the long-deserved acclaim that was no less than his due. It contained his signature number, "The Thrill Is Gone," and eight other tunes, six of them emanating from King's pen, usually in a co-writing situation. Hardliners point to the horn charts and the overdubbed strings as the beginning of the end of King's old style that so identifiably earmarked his early sides for the Bihari Brothers and his later tracks for ABC, but this is truly the album that made the world sit up and take notice of B.B. King. The plus points include loose arrangements and a small combo behind him that never dwarfs the proceedings or gets in the way. King, for his part, sounds like he's having a ball, playing and singing at peak power. This is certainly not the place to start your B.B. King collection, but it's a nice stop along the way before you finish it." (Cub Koda, AMG)
B.B. King, guitar, vocals
Hugh McCracken, guitar
Paul Harris, piano, electric piano, organ
Gerald "Fingers" Jemmott, bass
Herbie Lovelle, drums
Digitally remastered