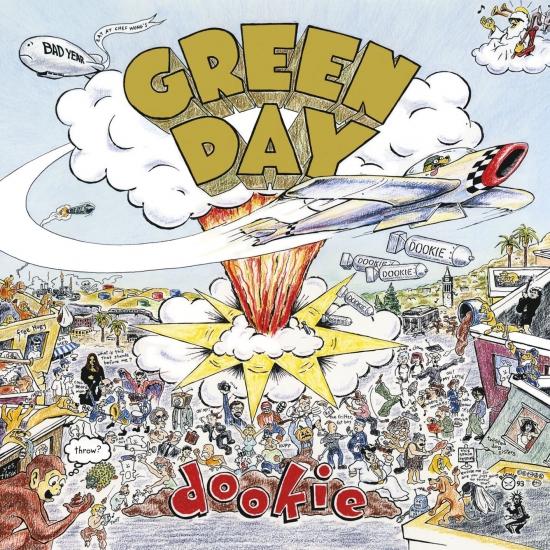 „Dookie“ won the 1995 Grammy Award for Best Alternative Music Performance. Green Day was also nominated for Best New Artist, 'Basket Case' was nominated for Best Rock Performance By A Duo Or Group With Vocal, and 'Longview' was nominated for Best Hard Rock Performance.
In the days before there was grunge or thrash, a movement called punk arose as a populist response to the conformity of corporate rock, and a return to the garage roots of the music. Punk, new wave...whatever you want to call it, the movement was quickly co-opted by the major labels and radio as the best bands quickly evaporated into the pop mainstream while the rest faded into obscurity or day jobs.
'I'm not growing up, I'm just burning out, and I stepped in line to walk amongst the dead,' singer-guitarist Billy Joe screams on the opening 'Burnout,' enunciating a timely slacker sentiment over a decidedly punk trio track, roaring through your speakers like a freight train powered by old Ramones and Clash records. One can hear the complaints of „Dookie“ articulated in a thousand smoke-filled bedrooms throughout America. On 'Longview,' tongue not so firmly implanted in cheek, they extend their view of slacker apathy to apply to the fading joys of masturbation, but quickly answer their own ennui with the real world complaints of 'Welcome To Paradise,' begging the question, is there anything out there?
On a song like 'She,' Green Day seemingly answers all the questions of apathy with a furious groove and lyrics that urge listeners 'locked up in a world that's been planned for you' to 'smash the silence with the brick of self-control.' And with 'Sassafrass Roots' Green Day ups the slacker ante dealt up by Beck on 'Loser' by asking, 'So why are you alone wasting your time, when you could be with me wasting your time...may I waste your time, too?' The humor and furious musicianship Green Day display on „Dookie“ (listen to them echo 'Sweet Home Alabama' on 'When I Come Around') undercuts all the talk of apathy, confusion and lack of direction by providing a whaling home-grown alternative to business as usual rock. And wasn't that what punk was all about?
„Green Day couldn't have had a blockbuster without Nirvana, but Dookie wound up being nearly as revolutionary as Nevermind, sending a wave of imitators up the charts and setting the tone for the mainstream rock of the mid-'90s. Like Nevermind, this was accidental success, the sound of a promising underground group suddenly hitting its stride just as they got their first professional, big-budget, big-label production. Really, that's where the similarities end, since if Nirvana were indebted to the weirdness of indie rock, Green Day were straight-ahead punk revivalists through and through. They were products of the underground pop scene kept alive by such protagonists as All, yet what they really loved was the original punk, particularly such British punkers as the Jam and Buzzcocks. On their first couple records, they showed promise, but with Dookie, they delivered a record that found Billie Joe Armstrong bursting into full flower as a songwriter, spitting out melodic ravers that could have comfortable sat alongside Singles Going Steady, but infused with an ironic self-loathing popularized by Nirvana, whose clean sound on Nevermind is also emulated here. Where Nirvana had weight, Green Day are deliberately adolescent here, treating nearly everything as joke and having as much fun as snotty punkers should. They demonstrate a bit of depth with 'When I Come Around,' but that just varies the pace slightly, since the key to this is their flippant, infectious attitude -- something they maintain throughout the record, making Dookie a stellar piece of modern punk that many tried to emulate but nobody bettered.“ (Stephen Thomas Erlewine, AMG)
Billie Joe Armstrong, vocals, guitar
Mike Dirnt, bass, backing vocals
Tré Cool, drums, guitar and lead vocals on 'All by Myself'
Recorded September–October 1993 at Fantasy Studios, Berkeley, California
Engineered by Casey McCrankin, Neill King
Produced by Rob Cavallo, Green Day
Digitally remastered

In 1987 friends Billie Joe Armstrong and Mike Dirnt created a band named Sweet Children. Their first show of note took place in October of that year at Rod’s Hockey Pit in California. A year later John Kiffmeyer joined their band as a drummer and business manager, helping them create a local fan base. They were signed to Lookout! Records after the owner, Larry Livermore saw them play in one of their earlier shows. In order to avoid confusion with the band Sweet Baby, they changed their name. The band now known as Green Day was born. The name is supposedly related to their liking of marijuana.
Lookout! released their first album in 1990 named 39/Smooth. Included with the album was a letter supposedly from I.R.S. Records saying they had tried to sign Green Day. The band included a response saying they were loyal to Lookout!. Their response called I.R.S. “cheesy and washed up.” Later in 1990 Green Day released Slappy and Sweet Children. Also in 1990 John Kiffmeyer left the band to attend college. Tré Cool, the drummer from The Lookouts became Green Day’s temporary replacement. Once it was apparent that Kiffmeyer did not plan to return, Tré Cool took up the role as permanent drummer. In 1991, 1,039/Smoothed Out Slappy Hours, a compilation of 39/Smooth, Slappy and 1,000 Hours albums. For most of 1992 and 1993, the band was on tour which included shows in Europe. In 1992, their album Kerplunk sold fifty thousand copies in the United States. This was impressive for the independent punk band.
The success of Kerplunk drew interest from major record companies to Green Day. They decided to leave Lookout! records and sign with Reprise Records under the producer Rob Cavello. This move gave them the name sellouts in the eyes of many punk fans. This did not stop them as they went on to release Dookie. The album was recorded in three weeks and was an immediate success. The airtime given to “Longview,” “Basket Case,” and “When I Come Around” by MTV aided this success greatly. Every one of those songs hit number one on Modern Rock Tracks charts. That same year marked their nationwide tour accompanied by the bands Queercore and Pansy Division. Green Day played at both Lollapalooza and Woodstock 1994. The later performance jump started their publicity and recognition nationwide. In 1995, Dookie won the Grammy for Best Alternative Album.
In 1995, the single “J.A.R.” went right to the number one spot on the Modern Rock Track chart. The album Insomniac quickly followed in the fall of 1995. Insomniac was much darker than the band’s previous work. It did well, getting four of five stars from Rolling Stone Magazine. One of the songs on this album referred to the bands thought that they have gone too commercial in their music. Insomniac was not as successful as Dookie, but it still managed to sell seven million copies in the United States. It also won the band award for Favorite Artist, Favorite Rock Artist and Favorite Alternative Artist in 1996 at the American Music Awards. The video for “Walking Contradiction” was nominated for Best Video, Short Form and Best Special effects at the MTV Video Music Awards. After this, the band pulled out of a European tour, citing their exhaustion.
The band took a break in 1996 and picked up working on a new album in 1997. Right from the beginning, they agreed that the album had to be different than their previous work. The experimental album was labeled Nimrod, released in 1997. The album had a wider variety of music, punk rock, surf rock, ska and an acoustic ballad. Nimrod hit number ten on the charts due to the popularity of “Good Riddance (Time of Your Life).” This same song won an MTV Video award for Best Alternative Video. The video focused on major changes in the lives of a variety of people, overlaid by the guitar part. Other songs from Nimrod included “Nice Guys Finish Last,” “Hitchin’ a Ride,” and “Redundant.”
Warning was released in 2000, which followed the same style change as Nimrod. All Music Guide gave it a four point five out of five, saying that while not innovative, it was a satisfying endeavor. The Rolling Stone magazine was harsher in their rating of a three out of five. They cited the band’s previous hard core work and claimed that people would not want to listen to the lighter style of music from Green Day. Despite the hits, “Minority” and “Warning,” fans began to lose interest in the band because of the album Warning. Most of Green Day’s work had previously hit double platinum, Warning only warranted gold.
In 2001 at the California Music Awards Green Day was nominated for eight different awards, they won them all, those awards were Outstanding Album, Outstanding Punk Rock/Ska Album, Outstanding Group, Outstanding Male Vocalist, Outstanding Bassist, Outstanding Drummer, Outstanding Songwriter and Outstanding Artist. The release of warning was followed by their greatest hits album International Superhits! and an assemblage album called Shenanigans. These sold well, reaching platinum in the United States. Shenanigans was nominated for a Grammy for best Rock Instrumental Performance.
In the summer of 2003 the master tapes with all twenty songs for their new album tentatively called Cigarettes and Valentines was stolen from the studio. Instead of redoing the album, decided to make another, even better album. That same year, they worked with Iggy Pop on two songs on his new album Skull Ring. It was then that the band had serious talks to work out some issues they had with the other members. American idiot was the result and was released in 2004. It hit number one on the Billboard charts, marking the first time Green Day had such a rating. It was commonly called a “punk rock opera” following the “Jesus of Suburbia.” It won the Grammy in 2005 for Best Rock Album and took seven of eight awards in the 2005 MTV music awards.