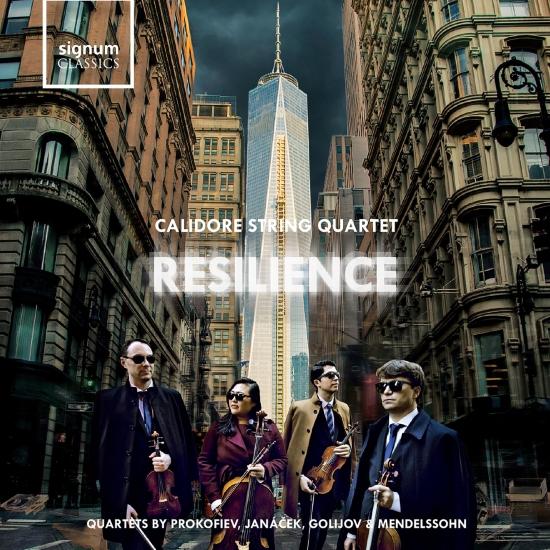 In a world of dissonance and conflict combined with omnipresent media reporting, the unrelenting noise of social and political discord seems to be ever increasing. But the power of creativity inherent in music can provide balm and respite. This is the strong belief of the young players of the celebrated Calidore String Quartet and is their motivation for selecting this compelling repertoire for Resilience, their debut CD on Signum Records to be released worldwide on October 12.
The Calidore String Quartet is a recent Avery Fisher Career Grant and Lincoln Center Emerging Artist Award recipient, and Grand-Prize winner of the 2016 M-Prize International Chamber Music Competition. The multi-award-winning ensemble is based in New York and already recognized as one of America’s foremost quartets with a steadily growing reputation in Europe and the UK where it is currently part of the BBC New Generation Artists scheme and a recent winner of a Borletti-Buitoni Trust Fellowship. The players wanted to find their own musical standpoint in the current environment of unrest and division, so they identified four masterworks from great composers who, whether in the midst of personal emotional turmoil or external conflict, seemed to find a cathartic path towards optimism through music.
In Mendelssohn’s String Quartet op. 80, composed in the wake of his beloved sister’s untimely death in 1847, the turbulence of grief and anger gives way to a sense of nostalgia and tenderness in the third movement to bring some sense of consolation. Janáček poured out his tumultuous feelings of unrequited love in his first string quartet based on Tolstoy’s novella ‘The Kreutzer Sonata’, a narrative that reflected his own frustration at being trapped in a loveless marriage while hopelessly in love with a younger woman.
Argentine composer Golijov was inspired by two contrasting experiences - one of violence in the Middle East and another of tranquillity in a planetarium - for his quartet Tenebrae, a study of conflict between the big-picture serenity of earth viewed from space and the close-up reality of pain and discord that troubles so much of the world. Decades before during the German army’s destruction of his Soviet homeland in 1941, Prokofiev was evacuated to the Kabardino-Balkar Republic, where he found a degree of emotional respite by immersing himself in the Kabardino folk rhythms and melodies to create a new palette of textures and sounds for his second String Quartet.
Calidore String Quartet 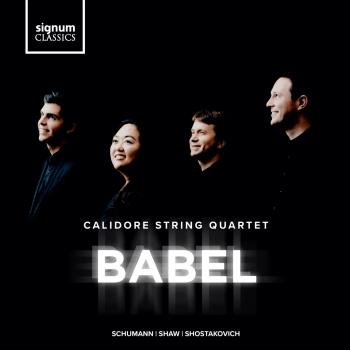 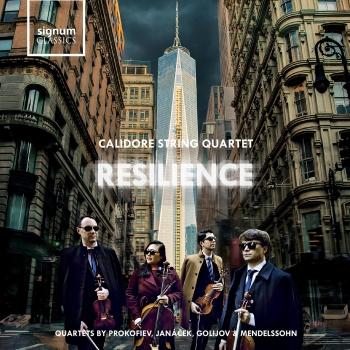 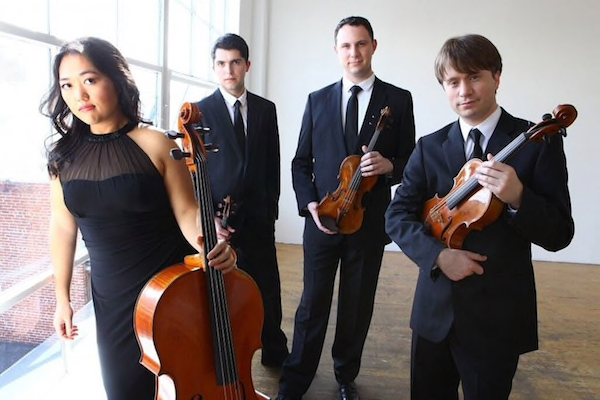 The Calidore String Quartet
“deep reserves of virtuosity and irrepressible dramatic instinct” (New York Times) and “balance of intellect and expression” (Los Angeles Times) has won them accolades across the globe and firmly established them as one of the finest chamber music ensembles performing today. After their Kennedy Center debut the Washington Post proclaimed that “Four more individual musicians are unimaginable, yet these speak, breathe, think and feel as one…The grateful audience left enriched and, I suspect, a little more human than it arrived.” The Calidore String Quartet – violinists Jeffrey Myers and Ryan Meehan, violist Jeremy Berry, and cellist Estelle Choi – have garnered the most prestigious prizes for chamber music in North America and Europe especially with their most recent award of the 2018 Avery Fisher Career Grant. The Calidore made international headlines as the winner of the $100,000 Grand-Prize of the 2016 and inaugural M-Prize International Chamber Music Competition, the largest prize for chamber music in the world. Also in 2016, the quartet became the first North American ensemble to win the Borletti-Buitoni Trust Fellowship and was named BBC Radio 3 New Generation Artists an honor that brings with it recordings, international radio broadcasts and appearances in Britain's most prominent venues and festivals. Most recently in 2017 the Calidore was honored with the Lincoln Center Emerging Artist Award. The 2017-18 season continues the Calidore’s three year residency with the Chamber Music Society of Lincoln Center’s CMS Two program.
The Calidore String Quartet regularly performs in the most prestigious venues throughout North America, Europe and Asia such as Carnegie Hall, Lincoln Center, Wigmore Hall, Berlin Konzerthaus, Cologne Philharmonie, Seoul’s Kumho Arts Hall and at many significant festivals, including Verbier, Ravinia, Mostly Mozart, Music@Menlo, Rheingau, East Neuk and Festspiele Mecklenburg-Vorpommern. Within two years of their founding, the Calidore String Quartet won grand prizes in virtually all the major U.S. chamber music competitions, including the Fischoff, Coleman, Chesapeake, and Yellow Springs competitions and captured top prizes at the 2012 ARD Munich International String Quartet Competition and Hamburg International Chamber Music Competition.
Highlights of the 2017-18 season include debuts at the Kennedy Center and the BBC Proms as well as in Boston, Philadelphia, Paris, Brussels, Cologne, Barcelona. The quartet returns to Wigmore Hall and the Verbier and Music@Menlo Festivals as well as major series across North America from Montreal to Seattle. In April 2018 the Chamber Music Society of Lincoln Center presents the Calidore in their Alice Tully Hall recital debut. As protégés of the Emerson Quartet, the Calidore String Quartet will perform a joint program with the Emersons at the Ravinia Festival as well as major series in Portland, Ann Arbor and Southern California. In addition to their Emerson collaboration the Calidore will also perform with cellist David Finckel, pianists Wu Han and Alessio Bax and violist Roberto Diaz.
In Summer 2018 the Calidore String Quartet makes its debut at the BBC Proms with a world-premiere by pulitzer-prize winning composer Caroline Shaw. The Calidore return to the Music@Menlo Festival and debut at the Cheltenham Festival (U.K.) Additionally they continue to serve as string quartet-in-residence at the Innsbrook Institute, Center Stage Strings, the Bellingham Festival of Music and will be directors of chamber music for the Bravo! Festival San Diego where they will mentor the most promising musical talent from China.
The Calidore String Quartet’s debut album for Signum Records, including quartets by Mendelssohn, Prokofiev, Janacek and Golijov, will be released in October 2018. Additionally, the Calidore String Quartet has produced three commercial recordings, the most recent of which is quartets by Tchaikovsky and Mendelssohn recorded live in concert at the 2016 Music@Menlo Festival. The French label Editions Hortus released the Calidore String Quartet’s second studio recording: Serenade: Music from the Great War, featuring music for String Quartet by Hindemith, Milhaud and Stravinsky, along with the world-premiere recording of Jacques de la Presle’s Suite en sol, and the second recording ever of Ernst Toch’s Serenade. February 2015 marked the release of the Calidore’s critically-acclaimed debut recording of quartets by Mendelssohn and Haydn for which Gramophone dubbed the Calidore String Quartet "the epitome of confidence and finesse,". The Calidore were featured as Young Artists-in-Residence on American Public Media’s Performance Today and their performances have been broadcast on National Public Radio, BBC, Canadian Broadcasting Corporation, Korean Broadcasting Corporation, Bayerischer Rundfunk (Munich), Norddeutscher Rundfunk (Hamburg), and were featured on German national television as part of a documentary produced by ARD public broadcasting.
In the 2016-17 season the Calidore gave world-premieres of works by Caroline Shaw, Hannah Lash and Benjamin Dean Taylor. In addition, the Calidore premiered string quartets of pulitzer-prize winner Caroline Shaw in New York, Berlin, Los Angeles, Washington D.C., Portland, Detroit and Belfast. The Calidore has collaborated with many esteemed artists and ensembles, including Jean-Yves Thibaudet, Joshua Bell, David Shifrin, Inon Barnatan, Paul Coletti, David Finckel, Paul Neubauer, Ronald Leonard, Paul Watkins, Raphael Merlin and the Quatuor Ebéne, among others. Formed in 2010 at the Colburn School of Music, the Calidore has studied closely with such luminaries as the Emerson Quartet, David Finckel, Andre Roy, Arnold Steinhardt, Günther Pichler, Gerhard Schulz, Guillaume Sutre, Gabor Takacs-Nagy, Paul Coletti, Ronald Leonard, Clive Greensmith, Martin Beaver and the Quatuor Ebène.
As a passionate supporter of music education, the Calidore String Quartet is committed to mentoring and educating young musicians, students and audiences. Since 2016 the Calidore serves as Visiting Guest Artists at the University of Delaware and Guest Artists in Residence at the University of Michigan. From 2014-16 the Calidore served as Artists-in-Residence at Stony Brook University. The Calidore has conducted master classes and residencies at Princeton, Stanford, the University of Michigan, UCLA and Mercer University. Previously, the Calidore served on the faculty of the Ed and Mari Edelman Chamber Music Institute at the Colburn School.
Using an amalgamation of “California” and “doré” (French for “golden”), the ensemble’s name represents a reverence for the diversity of culture and the strong support it received from its home of origin, Los Angeles, California, the “golden state.” The Calidore String Quartet aims to present performances that share the passion and joy of the string quartet chamber music repertoire.