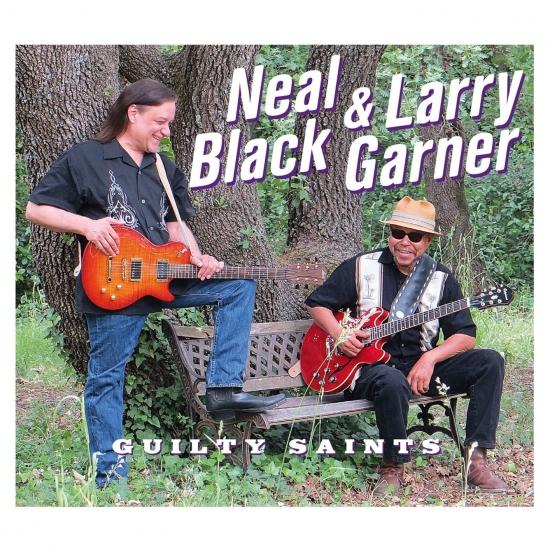 Neal Black from Texas, and Larry Garner from Louisiana, are two artist wellknown for their ability to play traditional Blues and also for stretching the boundaries of Blues Music in their original compositions. Even though this is their first collaboration they come together musically like two old friends.
Some highlights of the ALbum include the bluesy lead guitar exchange on 'God Today' and 'Bad People', and the sharing of vocals on songs like 'Saints of New Orleans' and 'A Friend Like You'. 'Guilty Saints' is not an album with a few guest tracks by the visiting artist, instead it is a real 'double artist' project.
Larry & Neal worked together on the music, lyrics and production and the final result is a fusion of Blues, Americana en Roots, that crosses into new musical territories for both Neal Black and Larry Garner.
Neal Black, vocals, lead, guitars
Larry Garner, vocals, lead & rhythm guitar
Mike Lattrell, piano, hammond organ
Kris Jefferson, bass, percussion
Jean-Michael Tallet, drums
Larry Crockett, percussion
Pascal “Bako” Mikaelian, harmonica
Christophe Duvernet, accordion
Leadfoot Rivet, guest vocals “Neighbor, Neighbor” & backing vocals “Saints of New Orleans”
Produced by Neal Black, Larry Garner, Michel Casuso, Mike Lattrell, Kris Jefferson

Neal Black
born in Washington, USA (his dad was American Indian, his mother German), Neal started his career on the Texas Blues scene, opening shows for Stevie Ray Vaughan, Albert King, the Fabulous Thunderbirds, Omar & the Howlers, Johnny Copeland, George Thorogood, Leon Russell, Paul Butterfield, the Nighthawks and many more. He studied music with Jazz greats like Barney Kessel, Lenny Breau, Herb Ellis and Jacky King.
Neal moved on to New York City beginning of the 1990’s performing with his own new project “The Healers” as well as working late night sessions with Joan Osborne, the Holmes Brothers and Popa Chubby. He quickly gained a great reputation as guitarist/performer/songwriter, and then decided to head to Mexico in the year 2000, where he spent almost 3 years touring in concert venues and at all the major blues festivals. It is in Mexico that he recorded “Dreams are for Losers”, later released by Dixiefrog in Europe.
He also worked as a professor of music at the Pan American University there, collaborating at the same time, in concert and at the studio, with legendary Mexican/Cuban artist José Fors and his band Forseps and other artists.
From 2004 onwards and up to now, Neal tours Europe regularly with his band “Neal Black & the Healers”, living between the South of France and the USA. He is also still working as a producer, songwriter and guitarist on projects for other artists.
In 2005, Neal Black was nominated in France/Europe for the “Trophee du Blues” as “Best Modern Electric Blues Guitarist”.
In 2007, Neal Black’s album “HANDFUL OF RAIN” was Number 1 on the French Blues Radio Charts, while receiving great reviews in the U.S.A and across Europe.
In 2011, another Neal Black production made it to Number 1 on the French Blues Radio Charts: “SOMETIMES THE TRUTH” with special guests Popa Chubby, Mason Casey, Fred Chapellier and Nico Wayne Toussaint, was recorded in France and New York City and was followed up by more than 200 concerts in 2012/2013…
Neal Black has recorded 9 Albums for DIXIEFROG Records during the past 20 years, being longer than any other artist on this label.