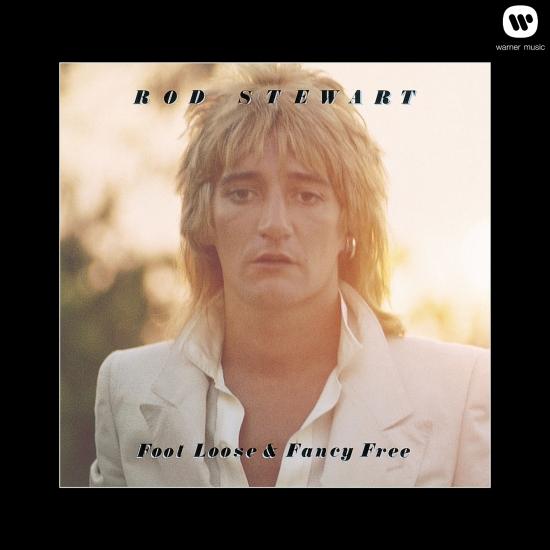 Foot Loose & Fancy Free is Rod Stewart's eighth album, released in November 1977. “You’re Insane” and “Born Loose” aren’t among Stewart’s finest songs, yet are not without their excitement, but the artistic ambitions aren’t much more than to have a good time. For a pure cheese groove, “Hot Legs” has plenty of attitude, while “You Keep Me Hangin’ On” is Motown updated and done well if a bit overlong at over seven minutes, casting one ear towards the Supremes and one more emphatically at Vanilla Fudge. “You’re In My Heart” remains one of Stewart’s most affecting ballads and was a deserved hit, whereas album closer “I Was Only Joking” is one of Stewart’s most autobiographical, touching and even slyly funny songs.
"This is Stewart's best since parting musical ways with the Faces. The spark of Stewart's distinctive, up-tempo R&B style has been restruck and, together with the choice crystallized ballad style that mushroomed his career to platinum proportions, combines his finest crooning capabilities as both balladeer and rocker. Choosing to record for the most part with his touring band of three guitars, keyboards, bass and drums has added to this cohesive and individual character. Though lacking some of the commercial hooks evident on "A Night On The Town," the albums polish avoids sterility. Best cuts: "Hot Legs," "You're Insane," "You're In My Heart," "You Keep Me Hanging On." (Billboard, 1977)
"Following the same formula as Atlantic Crossing and A Night on the Town, but not explicitly breaking the record into fast and slow sides, Foot Loose & Fancy Free was a limp effort from an increasingly complacent Rod Stewart. With the exception of the dumb, sleazy "Hot Legs," none of the rockers are discernible from each other, and this time he doesn't have a strong set of ballads to save him. The affectionately sappy acoustic ballad "You're in My Heart" was the big hit, but Stewart sounds completely convincing only on "I Was Only Joking." Coming at the end of the album, the song seems like a justification for the uninspired, by-the-book record that preceded it." (Stephen Thomas Erlewine, The All-Music Guide to Rock)
Rod Stewart, vocals
Jim Cregan, guitar, background vocals
Gary Grainger, guitar
Steve Cropper, guitarv Billy Peck, guitar
Fred Tackett, guitar
John Mayall, harp
Richard Greene, violin
Phil Kenzie, horns
John Jarvis, keyboards
David Foster, keyboards
Nicky Hopkins, keyboards
Phil Chen, bass
Carmine Appice, drums, background vocals
Paulinho da Costa, percussion
Mark Stein, background vocals
Recorded at Cherokee, Los Angeles; Manta Sound Studios, Toronto; Wally Heider, Los Angeles
Engineered by Andy Johns, John Naslen and Sy Potoma
Produced by Tom Dowd and Rod Stewart