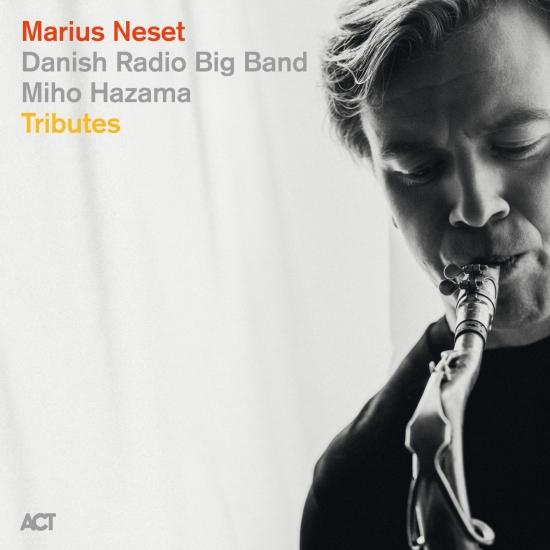 “This album marks a new phase,” says Marius Neset. “It was the last thing I did in Copenhagen, which has been my life for the past seventeen years.” In late 2019 the saxophonist and composer moved from the Danish capital to return to his native Norway. In “Tributes”, recorded shortly before he left, he marks this point of transition with music that has astonishing freshness – and unmistakably vivid feelings of joy and fulfilment.
The Norwegian saxophonist was already making his mark while still a student at the beginning of those Copenhagen years. This was a player of “hurtling virtuosity” (Guardian) for whom there seemed to be no technical barriers on the instrument, and his star has continued to rise ever since. In 2016 he was included in Downbeat magazine’s list of "25 for the Future", the first time a musician based in Europe had received this accolade. More recently his prowess as a composer has also been to the fore. Neset has the skill and the focus to conceive and build extensive musical structures from simple ideas. “Tributes” is indeed conceived as a continuous sequence. His music is nonetheless always full of incident, surprises and excitement. Having written substantial works for chamber orchestras, this collaboration with the DR Big Band has a different, and arguably more natural feel to it. As Neset says: “Working with jazz musicians again, it’s more like my home. I know these musicians well from my time in Copenhagen, and I wanted to get back to the joy of playing, to the feeling of each player having freedom.”
The album opens with the two-part composition "Bicycle Town", a homage to Copenhagen. "I always cycled there. A rhythmic and melodic idea came to me, and it seemed to me to be the musical equivalent of biking. I then developed it with the orchestra." It starts off gently and becomes an increasingly wild ride. It is as if a single cyclist sets off and gradually finds he is being joined by more and more people with similar ideas, until a multiform throng of cyclists grows into a single organism, which in the end – as the music concludes in a march motif – triumphs over gravity. It is a complete tour de force of rising intensity, led from the front by Neset's ecstatic saxophone playing.
The title track "Tribute" is, on one level, just a gentle little feature for DR Big Band soprano saxophonist Hans Ulrik, but appearances can be deceptive: compositionally Neset has managed to combine several contrasting musical worlds into its span of not much more than five minutes. There are quotes from the Allegretto of Beethoven's 7th Symphony, one from the Adagio of Mahler 9, plus allusions to Queen (Love of My Life), to Grieg and Brad Mehldau. "Farewell" and "Leaving the Dock" follow. Both tracks allude to the theme of saying goodbye to Copenhagen, with the latter giving extended solo spots to both trumpeter Mads La Cour and pianist Henrik Gunde. The album comes to a magical and playful close in the three-part "Childrens Day". "It's the part of the album I composed first, but it's also the perfect finale," says Neset. Children’s Day is a tradition in Norway, and the rising calypso-like figure that brings the composition to life after a short prologue came into Neset’s mind after a party in honour of his young nephew. This extended structure brings to the fore the playing of Per Gade on guitar and Andres Gaardmand on baritone sax in the first section, and then Kaspar Vadsholt on bass and Gerard Presencer on trumpet in the second. Celebrating the joy that small children bring to the world is another and very current theme for Neset: “I became a father for the first time in January 2020.”
An important contributor to "Tributes" is Japan-born, New York-based composer and arranger Miho Hazama. "She was fantastic to work with," says Neset. "She came with great suggestions – different tone colours like the soft woodwinds on Tribute". Hazama was, incidentally, also included alongside Neset in the 2016 "25 for the Future" list by Downbeat, and was recently appointed chief conductor of the DR Big Band.
“Tributes” is an album where everything seems to click in a particularly happy and enjoyable way. Neset has found an ideal context – and the right musicians – to mark the end of one chapter in his life and to turn the page for the beginning of another.
Marius Neset, tenor & soprano saxophone
Danish Radio Big Band
Miho Hazama, conductor
Recorded by Morten BuDchert at DR Studio 3, Copenhagen, March 2019
Mixed by August Wanngren at Virkeligheden
Mastered by Thomas Eberger at Stockholm Mastering
Produced by Marius Neset 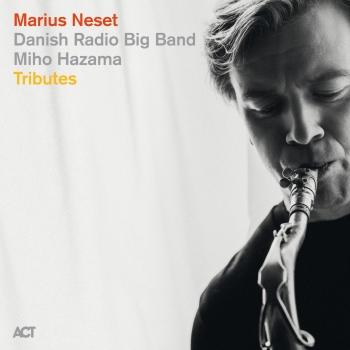 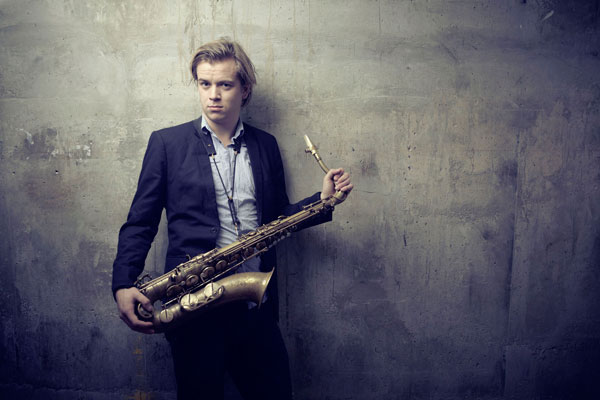 Marius Neset
was born in 1985, in Bergen, a sleepy Norwegian harbour town that’s home to the internationally renowned Nattjazz Festival (Neset won the Talent Award there in 2004). Besides his love of jazz in its widest sense, the saxophonist-composer also grew up listening to bands from the so-called ‘Bergen wave’ of post-rock such as Royksopp (and from there on to Radiohead) through to the great classical composer of his hometown Edvard Grieg as well as more contemporary art music. “I love being in the mountains, and silence is a music as well. Maybe it’s because I’m from Norway I feel this,” he says. It accounts for the huge diversity and fluidity of movement between different elements of so-called genres that’s been a key characteristic of Marius Neset’s music to date.
When only 5 years old, before taking up the sax, he took lessons on drums and this has had a significant impact on his approach to composition in particular. “I think the drums gave me a rhythmic base that was very important. I learnt very young to play in these odd meters so I think I have a very natural feel for it,” he says. Neset, in live performance, also has the uncanny ability of making one saxophone sound like two or three.
In 2003 Neset moved to Copenhagen to study at the Rhythmic Music Conservatory. The great English pianist and large ensemble arranger Django Bates was professor there at the time and became Neset’s mentor. The saxophonist went on to become the star turn in Bates’ student big band StoRMchaser recording a CD Spring is Here (Shall we Dance?) in 2008. Meanwhile Neset also released his debut Suite for the Seven Mountains that year on the Danish Calibrated label. Besides a string quartet, it featured the Swedish drummer Anton Eger, who alongside Neset was also a leading member of Scandi-fusion boy band JazzKamikaze. In 2010 Django Bates took him to London to play at a concert at Kings Place marking his 50th birthday. Neset also appeared as a guest in Django Bates’ long time ensemble Human Chain at the famous Ronnie Scott’s club. Recorded by BBC Jazz on 3 he wowed the audience with his contrast of lightening virtuosity and tender, ethereal lyricism. One of those blown away was Dave Stapleton head of the fast emerging UK independent jazz label Edition Records.
Edition signed Neset to the label in 2011. GoldenXplosion, featuring a quartet that included Django on keys and the Scandi-Brit trio Phronesis’ rhythm section of Jasper Hoiby and Eger, was released to glowing press reviews with The Guardian writer John Fordham accurately predicting Neset would be, “on his way to being one of the biggest new draws on the circuit”. By the time of his second CD on Edition Birds in 2012, Neset had started developing his penchant for larger ensemble music and a widescreen palette of instrumental sound.
Still only 29 years of age, Neset is successfully hitting the international stage, and being talked about as a big tenor in a lineage that extends from the post-bop Americans from Michael Brecker, Chris Potter through to fellow Norwegian Jan Garbarek. But there’s a lot more to one of Europe’s brightest young stars than that. “I’m very inspired by people like Frank Zappa, Django Bates, Pat Metheny and Wayne Shorter where the music and the playing is one,” he has said. Neset’s classy, cohesive composition and arranging skills have come into even sharper focus with a new album Lion released in 2014, his debut for the Munich-based ACT, one of Europe’s leading jazz labels, in a collaboration with the celebrated Trondheim Jazz Orchestra, whose former collaborations have boasted the likes of Chick Corea and Pat Metheny. It was originally a commission to compose for the 13-piece orchestra (in a lineup that includes tuba player Daniel Herskedal, a fellow student at RMC who together released an impressive duo album Neck of the Woods in 2012.) for a concert at the 2012 Molde Jazz Festival. “After the premiere in Molde, these compositions felt so special that we decided to record this album and play many more concerts with it,” he says.