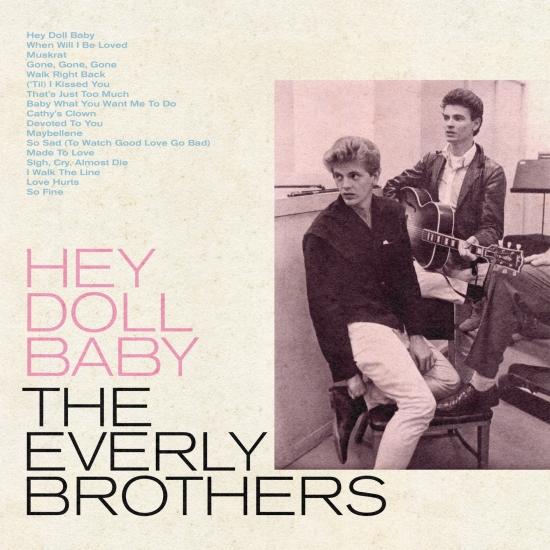 Phil and Don Everly were unparalleled rock and roll trailblazers and country rock pioneers. Their timeless harmonies made them one of the first superstar acts in music history and profoundly impacted generations of artists to follow. The Everly Brothers' hits from the late-1950s helped lay the very foundation for rock and roll itself, and the albums they made with Warner Bros. Records in the 1960s revealed the depth of their talents as both songwriters and singers.
The Everly Brothers were seminal to many of the masters of rock and pop music in one way, shape, or form, owing to their country roots, Bo Diddley influence, their original take on singing, songwriting, and formidable musicianship. The Beatles, The Beach Boys, Simon and Garfunkel, Gram Parsons, Tom Petty, and Linda Ronstadt have credited their profound influence as a North Star. And their influence continues to be evident through each passing decade as more modern artists such as Pearl Jam, Cat Power, and Angel Olsen distill their inspiration. The duo's timeless songs and vocal arrangements have been covered by a legendary stable of artists including everyone from Ray Charles, The Who, and Reba McEntire. With a sense of notable homage and devotion from powerhouse duos such as Billie Joe Armstrong and Norah Jones and Robert Plant and Alison Krauss as well.
Hey Doll Baby is a newly remastered, 17-track compilation that collects some of the lesser-known buried treasures in the Everly Brothers' rich catalog, with songs assembled by Adria Petty, Tom Petty's daughter, who worked closely with both Everly families on the project, with help from Phil's widow, Patti, and son, Jason. Hey Doll Baby holds the bittersweet distinction of being the final project Don worked on.
Petty says she became a fan of The Everly Brothers through her father. "The Everly Brothers held a special place in his heart because they were the rock 'n' roll trailblazers he related to the most. Self-made and determined like him. From the time I was around five years old, he passed on his passion for their music and story to me."
Hey Doll Baby explores The Everly Brothers' legacy, ironically, by avoiding their greatest hits. Petty explains: "This compilation was curated with an eye towards celebrating the deeper rockabilly tracks and some great covers, with a small emphasis on hits. Whether you are new to The Everly Brothers or are among the diehard fans, this is sequenced for a great vinyl "side 1/side 2" listening experience. Put this record on and get transported to another time and place. It will leave you feeling better."
Hey Doll Baby delivers on that promise with the swinging rockabilly of "Baby What You Want Me to Do" and the pure pop bliss of "Made to Love," along with choice covers of Johnny Cash's "I Walk the Line" and Chuck Berry's "Maybellene." The collection features four of the Everly's original Cadence recordings including the title track and the Top 10 hits "('Til) I Kissed You" (#4), "When Will I Be Loved" (#7), and "Devoted to You" (#10). The set also includes the #1 smash "Cathy's Clown," which was the Everly Brothers' first Warner Bros. single in 1960 and the best-selling song of their career.
"Adria Petty, the daughter of the late Tom Petty, is the person to thank for this lovely little compilation that highlights some lesser-known tunes from roots-rock duo the Everly Brothers. As she writes in the liner notes, the Everlys were a shared obsession between she and her dad - making this as much of a tribute to Tom Petty as it is for Don Everly who passed away last year at the age of 84. The song selection is top notch, hitting only a few tunes that were in heavy rotation on oldies radio ('Cathy's Clown,' 'When Will I Be Loved') and filling it out with some choice rockabilly jams, covers ('I Walk The Line,' 'Maybellene') and some heartrending ballads." (Robert Ham, Paste Magazine)
The Everly Brothers
Digitally remastered 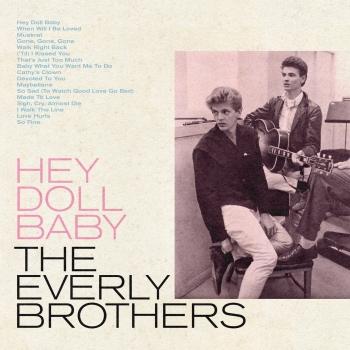 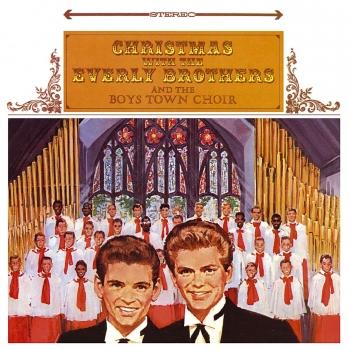 Christmas With The Everly Brothers And The Boys Town Choir 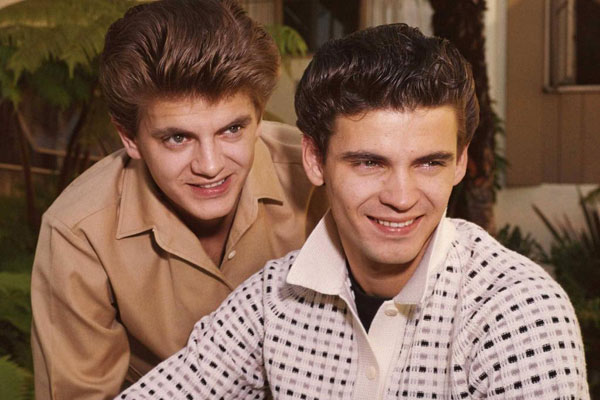 The Everly Brothers
Ike Everly was a multi-generation coal miner in Muhlenberg County, Kentucky. He would play music after work and on weekends with his two brothers, Chuck and Len. From a local black guitarist named Arnold Schultz, Ike mastered a unique and pioneering thumb-picking guitar style that he later taught to neighbor and fellow coal miner, Merle Travis, who then popularized it for most country and bluegrass musicians who followed.
Young Everly FamilyIke and his wife Margaret had their first child, Isaac Donald Everly, on February 1st of 1937 in Brownie, Kentucky. By this time Ike was ready to try his hand as a full-time musician. Before Don turned 2 the family relocated to Chicago where Ike played out extensively in the Chicago music scene. It was in Chicago, on January l9th, 1939, that second son Phillip Everly was born. Before long Ike was appearing with a country group, The North Carolina Boys, on KXEL radio.
Radio at the time featured live music and comedy shows and in 1945 Ike Everly and his family moved to Shenandoah, lowa, to accept a job offer at KMA radio station At the young ages of 8 and 6, sons Don and Phil began to perform on their parents' live radio show. Ike instilled in his sons his own love for music, from country and western to blues and everything in between. He encouraged the boys to sing and he taught them to play guitar.
At KMA the brothers were introduced to listeners as "Little Donnie" and "Baby Boy Phil." Mother Margaret would read the commercials and often join Ike and the boys in four-part harmonies. By 1950 the radio show had become known as "The Everly Family Show."
During the summer of 1952 the family accepted a job at WIRY in Evansville, Indiana. In September of 1953 they packed up the car and moved their radio show to WROL in Knoxville, where they were offered a Job on Cas Walker's show for $90 a week.
The first famous Everly Brothers fan was Chet Atkins. In 1955 Chet would buy The Everly Brothers a cup of coffee and a piece of pie almost every time he would see them in Nashville. "People knew we were Chet's friends," explains Don, "so they didn't run us out of town." "One thing that impressed me when I met those kids was that they were so intelligent," says Chet. "Don and Phil used proper English and I just thought they were a cut above . . . intellectually and education-wise."
In the spring of 1957 their producer, Archie Bleyer, proudly announced The Everlys' first Cadence label single with a half-page advertisement in Billboard magazine. In Its April 2Oth issue, Billboard said, "The Tennessee teenagers have a distinctive, appealing sound, and could click big in the Pop as well as C&W fields."
"Bye Bye Love" had been written by Felice and Boudleaux Bryant, a husband and wife songwriting team. "We had a song ca led "Give Me A Future: and we took the arrangement off that and put It on "Bye Bye Love" and it just seemed to work." "Bye Bye Love" enjoyed a 22-week run on the Billboard pop charts, peaking at #2.
"Bye Bye Love" went to #1 on the Country charts and #5 on the R&B, and the record became The Everlys' first million-seller. The release of "Bye Bye Love" sent The Everiy Brothers spiraling towards stardom and on May 11, 1957, the boys appeared on the Grand Ole Opry at the Ryman Auditorium in Nashville.
Their next song, "Wake Up Little Susie", hit #1 during the week of October l4th and it stayed # 1 for four weeks. It became their second million-seller. After recording "Wake up Little Susie," Don and Phil hit the road for a 78-city tour that began on September 6th and ran through the 24th of November, 1957, playing alongside some of the all time greats of rock 'n' roll such as Chuck Berry, Buddy Knox, The Drifters, Paul Anka, Fats Domino, The Crickets, and Eddie Cochran.
The Everly Brothers did continue on in the entertainment business. They had a summer television series on CBS. The unrelenting tour/performance schedule led to health and stress problems for both. In 1973 they hung up the act and continued on for the next 10 years with solo careers. In September of 1983, after their fathers funeral, The Everly Brothers reunited as a singing duo. They toured again and even recorded some albums that made it on the bestseller charts Don's son, Edan Everly, would often join the two in concert, singing and playing guitar. Don & Phil's sons, exceptional musicians and singer/songwriters in their own right, have also enjoyed successful careers. Don and his son Edan Everly performed at a fundraiser for Kentucky flood relief billed as "The Everly Brothers".
Edan released an album and video for Hollywood Records with his band, "Edan". Don's daughter Erin was a successful model and married to Axl Rose of the band, Guns N' Roses, and is the inspiration for one of the greatest rook ballads of all time, Rose's, "Sweet Chlid Of Mine".
Erin is currently writing an autobiography. Phil's son, Jason Everly, is a successful singer/songwriter, actor, and runs Everly Music Company. Phil's son, Chris Everly, is also a talented singer/songwriter. (Source: http://www.everlybrothers.net)