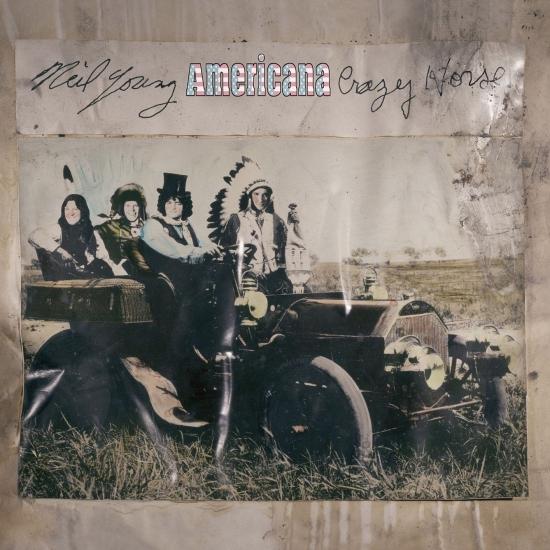 Americana is the first album to be released by Neil Young and Crazy Horse since 2003's Greendale and their first with the full Crazy Horse line-up including Billy Talbot, Ralph Molina and Frank "Poncho" Sampedro since Broken Arrow in 1996.
As you'll see from the track-listing, AMERICANA is a collection of classic, American folk songs. In their day, some of these may have been referred to as "protest songs," "murder ballads," or campfire-type songs passed down with universal, relatable tales for everyman.
Some of these compositions, like "Tom Dooley" and "Oh Susannah," were written in the 1800s, while others, like "This Land Is Your Land" (utilizing the original, widely misinterpreted "deleted verses") and "Get A Job," are mid-20th-century folk classics. It's also interesting to note that "God Save The Queen," Britain's national anthem, also became the de facto national anthem of sorts before the establishment of The Union as we know it until we came to adopt our very own "The Star Spangled Banner," which has been recognized for use as early as 1889 and made our official national anthem in 1931. Each of these compositions is very much part of the fabric of our American heritage; the roots of what we think of as "Americana" in cultural terms, using songs as a way of passing along information and documenting our past.
What ties these songs together is the fact that while they may represent an America that may no longer exist, the emotions and scenarios behind these songs still resonate with what's going on in the country today with equal, if not greater impact nearly 200 years later. The lyrics reflect the same concerns and are still remarkably meaningful to a society going through economic and cultural upheaval, especially during an election year. They are just as poignant and powerful today as the day they were written.
"Recorded on a Universal Audio tube console and to Studer two-inch eighttrack analog tape, thick chords and rough-and-ready riffs hang, wander, growl, gurgle, and toss around in the dirt; drum beats smack and slap like wet towels whapped against a cement wall. Everything, save for several well-placed choir vocal passages, is captured in the moment, fortifying Americana as the sound of a real, live band performing in a real space. After the collective’s nine-year hiatus, the dynamic is refreshing and reinvigorating to experience once again, even if it’s now been in commission for fourplus decades." (Bob Gendron, TONEAudio)
"On Young's first studio LP with the full Crazy Horse lineup since 1996, the garage-rock heroes rip through furious, feedback-drenched takes on folk standards from "Oh Susanna" to "This Land Is Your Land." Most of the covers boast haunting new melodies, and Young's raging, Ragged Glory-ish solos tangle with ghostly harmonies from a children's choir." (Rollingstone)
"At the Slamdance Film Festival earlier this year, Young talked about the album. "A very young choir of children plays with Crazy Horse [on the album,]" he said. "They're songs we all know from kindergarten, but Crazy Horse has rearranged them, and they now belong to us." (Andy Greene, Rollingstone)
"...[O]ne of Young's best efforts, as he and the band are obviously enjoying themselves throughout these vibrant sessions." (Greg Cahill, The Absolute Sound)
AMERICANA was produced by Neil and John Hanlon along with Mark Humphreys, and engineered by John Hanlon with John Hausmann and Jeff Pinn. It was recorded at Audio Casa Blanca by John Hanlon.
Neil Young, vocals, guitar
Crazy Horse:
Billy Talbot, bass, vocals
Ralph Molina, drums, vocals
Frank "Poncho" Sampedro, guitar, vocals
Additional musicians:
Dan Greco, orchestral cymbals, tambourine
Americana Choir
Pegi Young, vocals on "This Land is Your Land"
Stephen Stills, vocals on "This Land is Your Land"
Digitally remastered