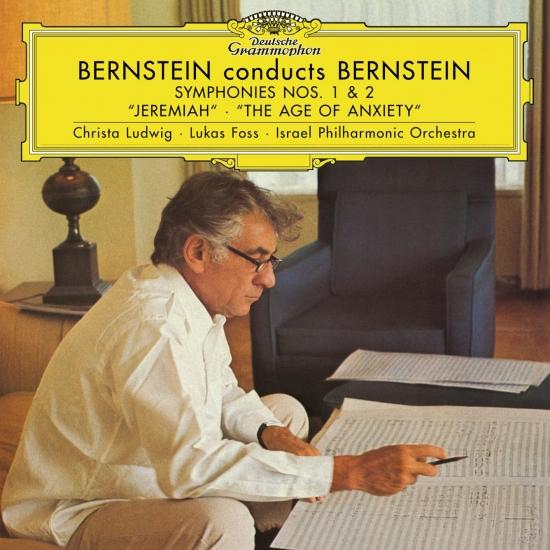 Info for Bernstein: Symphony No.1 "Jeremiah" & No.2 "The Age of Anxiety" (Remastered)

Leonard Bernstein's association with the Israel Philharmonic began early in his career as a conductor and composer, and in 1977 the orchestra organized a Bernstein Festival to mark the 30th anniversary of their first concert together. The festival lasted two weeks and consisted solely of works composed by Bernstein. Later that same year, in August of 1977, they appeared together at the Berlin Festival, which is when (and where) these live performances were recorded.
The Chichester Psalms were unfamiliar to me until I acquired this disk. They were originally commissioned for the 1965 Chichester Cathedral's annual festival. The texts are in Hebrew and include extracts from six different psalms. Bernstein himself called them "perhaps the most tonal score I've ever written". They are written for mixed choir, boy soloist and orchestra. The world premiere performance took place on July 15, 1965 in the Philharmonic Hall, New York and with Bernstein conducting, two weeks before the actual performance in the Chichester Festival. The performance on this CD is the full orchestral version with the Vienna Boys' Choir performing superbly. Listening to them for the first time I am captivated by the beauty of the performance.
His Symphony No. 1, "Jeremiah", originally premiered in 1944 and won the New York Music Critics Circle annual award (this was the year immediately following his stunning triumph of November, 1943 when he was called upon at short notice to fill in for Bruno Walter and led the New York Philharmonic to great acclaim). Symphony No. 2, "The Age of Anxiety", was written just a few years later, during the period 1947-49, and is an orchestral work that represents the composers interpretation of Auden's poem The Age of Anxiety. Lukas Foss is the piano soloist for the second symphony. The performances of both symphonies on this CD are excellent, particularly Christa Ludwig in the final movement of "Jeremiah".
Christa Ludwig, soprano (on tracks 3)
Lukas Foss, piano (on tracks 4-9)
Wiener Jeunesse-Chor
Günther Theuring, Chorus Master
Israel Philharmonic Orchestra
Leonard Bernstein, conductor
Digitally remastered