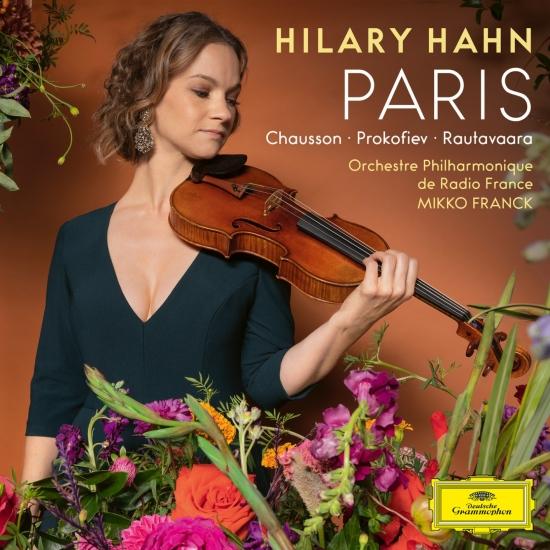 Three-time Grammy-winning violinist Hilary Hahn’s upcoming release on DG. The new album Paris features Poème for Violin and Orchestra by Parisian-born composer Chausson; Prokofiev’s Violin Concerto No.1, first performed in Paris; and the world premiere recording of Rautavaara’s final score, Deux Sérénades, written for and premiered by Hahn, the Orchestre Philharmonique de Radio France and its Music Director, Mikko Franck. With this project Hahn pays tribute to the rich cultural heritage of a city that has been close to her heart throughout her career.
“Paris,” says Hahn, “is about expression, it’s about emotion, it’s about feeling connected to a city and a cultural intersection, in a way that’s inspiring for the player and the listener. It has Parisian threads all the way through it. But it’s also a big reference to the arc of my career. I’ve been playing in Paris since I was a teenager.”
Hilary Hahn, violin
Orchestre Philharmonique de Radio France
Mikko Franck, conductor 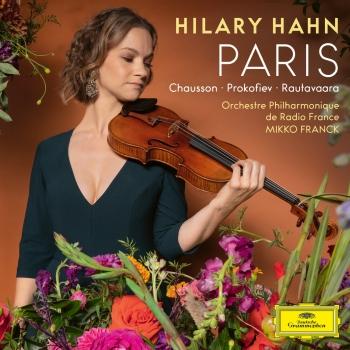 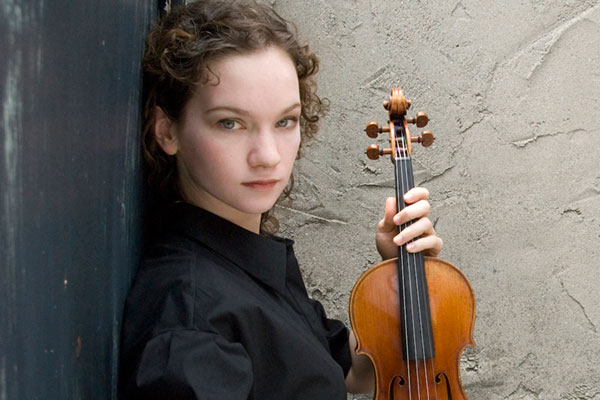 Hilary Hahn
Three-time Grammy Award-winning violinist Hilary Hahn is renowned for her virtuosity, expansive interpretations, and creative programming. Her dynamic approach to music-making and her commitment to sharing her musical experiences with a broad global community have made her a fan favorite.
Hahn’s distinct stylistic choices honor the traditional violin literature while delving into the unexpected. In the past two seasons in recital tours across the United States, Europe, and Japan, she premiered six new partitas for solo violin by composer Antón García Abril. The works were Hahn’s first commissioning project for solo violin and her first commission of a set of works from a single composer. García Abril was also one of the composers for “In 27 Pieces: the Hilary Hahn Encores,” Hahn’s multi-year commissioning project to revitalize the duo encore genre. Her album of those encores won a Grammy for Best Chamber Music/Small Ensemble Performance in 2015, and the print edition of the complete sheet music will be released by Boosey & Hawkes. Complete with Hahn’s fingerings, bowings, and performance notes, the sheet music will ensure that the encores become part of the active violin repertoire.
In 2017–18 Hahn returns to repertoire from the 19th and 20th centuries, performing the Tchaikovsky, Dvořák, and first Prokofiev violin concertos across the United States and Europe. She performs Bernstein’s Serenade (after Plato’s “Symposium”) with the Los Angeles Philharmonic, Philadelphia Orchestra at home and at Carnegie Hall, and Houston Symphony at home and on tour in Belgium, Poland, Austria, and Germany as part of the celebrations of Bernstein’s centennial season.
As part of recent residencies at the Vienna Konzerthaus, Seattle Symphony, and National Orchestra of Lyon, Hahn piloted free – and sometimes surprise – concerts for parents with their babies, as well as a knitting circle, a community dance workshop, a yoga class, and art students. She will continue to create these community-oriented concerts as the 2017–18 Artist-in-Residence at the Philadelphia Orchestra, encouraging music lovers to combine live performance with their interests outside the concert hall and providing opportunities for parents to enjoy live music with their infants. She also plays a free concert to promote a college membership program and participates in the Philadelphia Orchestra’s ongoing educational activities.
Hahn took her first violin lessons in the Suzuki program of the Peabody Institute in her hometown of Baltimore at the age of three, and at five she began lessons with Klara Berkovich, who had just emigrated from St. Petersburg. At ten, Hahn was admitted to the Curtis Institute of Music in Philadelphia to study with Jascha Brodsky, a former pupil of Eugène Ysaÿe and Efrem Zimbalist. Hahn completed her university requirements at sixteen, having already made her solo debuts with the Baltimore, Pittsburgh, Utah, and Bavarian Radio symphony orchestras; the Philadelphia, Cleveland, and Budapest Festival orchestras, and the New York Philharmonic, among others. Hahn continued her studies for three more years, delving into languages, literature, and writing, and received her bachelor’s degree at nineteen. She spent four summers at the Marlboro Music Festival and another four in the total-immersion German, French, and Japanese programs at Middlebury College. She holds honorary doctorates from Middlebury College and Ball State University, where there are also three scholarships in her name.
Hahn has released sixteen albums on the Deutsche Grammophon and Sony labels, in addition to three DVDs, an Oscar-nominated movie soundtrack, an award-winning recording for children, and various compilations. Spanning an extremely wide range of repertoire, including Bach, Stravinsky, Elgar, Beethoven, Vaughan Williams, Mozart, Schoenberg, Paganini, Spohr, Barber, Bernstein, Ives, Higdon, and Tchaikovsky, her recordings have received every critical prize in the international press and have met with equal popular success. All have debuted in the top ten of the Billboard classical chart. Her seventeenth album will be a retrospective collection that also contains new live material and art from her fans, in keeping with a decades-long tradition of collecting fan art at concerts. Hahn’s first Grammy came in 2003 for her Brahms and Stravinsky concerto album. A pairing of the Schoenberg and Sibelius concerti spent 23 weeks on the charts and earned Hahn her second Grammy. In 2010 she premiered her recording of Jennifer Higdon’s Violin Concerto along with the Tchaikovsky concerto. Higdon’s composition, which was written for Hahn, went on to win the Pulitzer Prize. In 2012 Hahn launched Silfra with experimental prepared-pianist Hauschka. The album was produced by Valgeir Sigurðsson and was entirely improvised by Hahn and Hauschka following an intensive period of development.
Hahn is an avid writer, having posted journal entries for two decades on her website, hilaryhahn.com, and published articles in mainstream media. On her YouTube channel, youtube.com/hilaryhahnvideos, she interviews colleagues about their experiences in music. Her violin case comments on life as a traveling companion, on Twitter and Instagram at @violincase. In 2001, Hahn was named “America’s Best Young Classical Musician” by Time magazine, and in 2010, she appeared on The Tonight Show with Conan O’Brien. Hahn was featured in the Oscar-nominated soundtrack to The Village and has participated in a number of non-classical productions, collaborating on two records by the alt-rock band ….And You Will Know Us By The Trail of Dead, on the album Grand Forks by Tom Brosseau, and on tour with folk-rock singer-songwriter Josh Ritter.