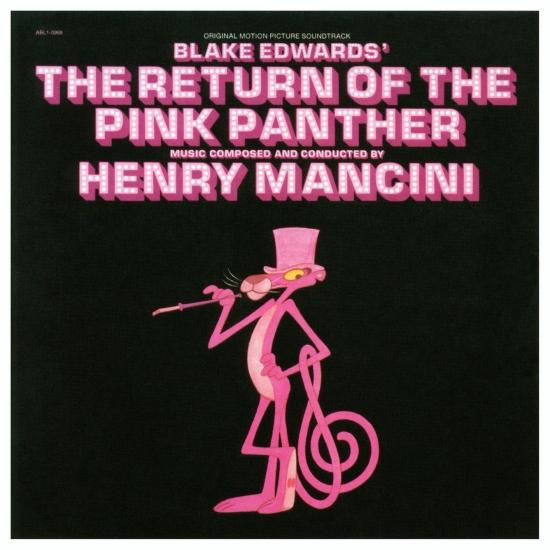 Sellers and Mancini stole the show (both earning Golden Globe nominations) when Clouseau returned in '75. This was the best Pink Panther movie-the slapstick and the big-band accompaniment were turned up a notch for this one; the main theme joins The Greatest Gift; So Smooth; The Orange Float, and more!
'The Pink Panther Theme' is an instrumental composition by Henry Mancini written as the theme for the 1963 film The Pink Panther and subsequently nominated for the 1964 Academy Award for Best Original Score. The eponymous cartoon character created for the film's opening credits by David DePatie and Friz Freleng was animated in time to the tune. The tenor saxophone solo was played by Plas Johnson.
The tune was included on the film's soundtrack album and issued as a single in 1964; it reached the Top 10 on the Billboard adult contemporary chart and won three Grammy Awards.
'Moon River' might be Henry Mancini's biggest hit, but it was Mancini's score for Blake Edwards's 1964 farce The Pink Panther that introduced his music to generations of children; the haunting, jazzy main theme was used in dozens of cartoon shorts that were broadcast on television for years. Aside from that familiar tune, the majority of this soundtrack consists of swinging-'60s jazzy pop exotica with a Continental flair and a sly sense of humor, most notably the madcap 'Shades of Sennett.' You also get one of Mancini's finest pop songs, 'It Had Better Be Tonight,' here in both an instrumental and a vocal version, with lyrics by Johnny Mercer. (Sadly, the version in Italian sung in the film by Capucine has never been on any of the soundtrack releases.) This HighRes-Remaster also includes four tracks from 1974's The Return of the Pink Panther.
Recorded 1964 at RCA Victor's Music Center Of The World, Hollywood, California
Engineered by Jim Malloy
Digitally remastered by Elliott Federman at SAJE Sound, New York
Produced by Joe Reisman
Digitally remastered