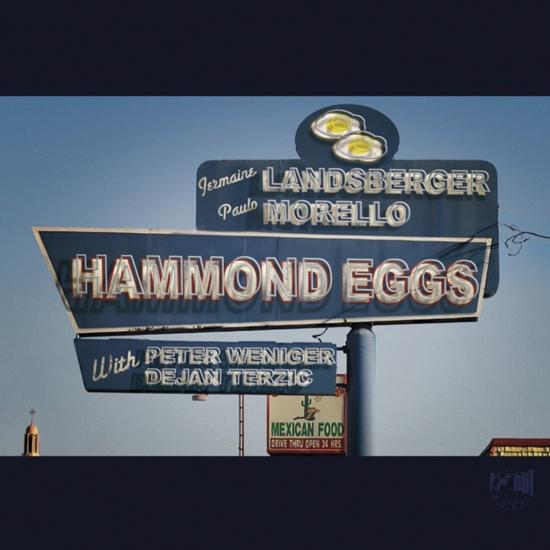 Many anecdotes and clichés have grown up around the Hammond B3. This is no problem at all for a highly accomplished organ player like Jermaine Landsberger, particularly as he has a guitarist with the same tongue-in cheekiness at his side: Paulo Morello. The duo has taken up the challenge of freeing the mighty organ from the realm of nostalgia and dusty grooves and, with “Hammond Eggs”, they have discovered the real thing. This production cleverly links together blues, boogaloo, modern jazz, shuffle and funk, and, notwithstanding this unconventional approach, the music brings out the true character of the B3 throughout the session.
Ten years ago the pair discovered that they are birds of a feather and since then they have worked regularly together on jazz gigs. As long as a decade ago, they had planned to make an album together – and now their dream has come true. To enhance the project, they invited two other jazz virtuosi to join them. Let’s take a close look at all four participants: Jermaine Landsberger comes from a Sinti family and has made many albums as a jazz pianist under his own name. Originally inspired by the sound of Django Reinhardt, he has played with Bireli Lagrene, Martin Taylor and Tony Lakatos. Later he focused on modern jazz and developed his own B3 tone in a completely innovative way. He combined his virtuoso piano style with the earthy and bluesy organ sound to create a highly explosive blend.
A long-time member of the In + Out family is Paulo Morello. The guitar player has brought Brazilian stars to Europe with his “Bossa Legends” project. Paul Kuhn was highly impressed by his inventive flair as an arranger and his improvisational fluency, and hired him for the album, “My Shining Hour”, which he recorded with his long-time stage companion, Greetje Kauffeld. Paulo got his B3 baptism of fire when he accompanied the legendary Jimmy Smith on his last European tour in 2004.
Dejan Terzic ranks among the elite of European jazz drummers – he is skilled in the context of big bands, funk and modern jazz. He has played and recorded with Roy Hargrove, Antonio Farao, Enrico Rava and Jerry Bergonzi. He has worked with Landsberger and Morello for the past three years.
Last but not least, the new arrival, turning the grooving trio into a quartet: tenor saxophonist Peter Weniger from Hamburg, who needs no introduction to jazz fans. He has been collecting awards since the late 1980s, among them the SWR jazz prize. Among his cohorts on the nine albums he has made to date have been Hubert Nuss, John Abercrombie, Rufus Reid, Adam Nussbaum and David Liebman. Weniger was, and is, a highly esteemed session man, having guested with Jasper van’t Hof, Billy Cobham, Eddie Palmieri and Django Bates, as well as all the big bands of the ARD. As a professor of jazz saxophone, he has taught at the Berliner Kunsthochschule for the past seven years.
“Hammond Eggs” offers you a spirited synthesis of earthy blues, bold funkiness and a rich vocabulary of modern jazz from the first to the last bar. The grooving title track is a New Orleans shuffle, with lusty drumming by Terzic and impressively solid B3 and guitar soli. With “Gypsy Steps” Landsberger transforms the Coltrane classic, “Giant Steps” and turns it into a fast-paced piece with complex unison playing by the quartet. With “Remembering Jimmy”, Morello presents a reminder of his spell with the boss of the B3. It’s a tribute to his mentor, Jimmy Smith, who would most certainly have been highly impressed. On the samba, “Batida Diferente”, Landsberger proves that the organ also feels at home in the tropical part of the world .This composition, by Durval Ferreira and Mauricio Einhorn, gets a surprising treatment: Morello contributes a Brazilian flavour which is taken up by the organ and hotted up by Terzic’s manifold percussive effects.
Twice the band honours the Hungarian guitar player, Kosta Lukacs. A close friend of Jermaine’s father, Lukacs died in 1992. His originals – “Latin Movin’” and “Song For My Little Daughter” – are dreamy and harmonically elaborate works of art. To the first, Peter Weniger makes a delicate contribution and, in the second, a sad and moving melody, Landsberger and Morello team up for an intimate dialogue. There is an authentic, after- hours mood to the sensual ballad, “If You Could See Me Now”, matching the Sarah Vaughan version with its imaginative excursions on keys and strings. And Weniger’s saxophone has another impassioned moment of glory in the soulful and sensitively rendered “Bright Sky“.
If “ham and eggs” guarantee an energetic start to a new day, then “Hammond Eggs” will ensure that your verve and vitality will endure into the late-night hours.
Jermaine Landsberger, Hammond Organ B3
Paulo Morello, guitar
Peter Weniger, tenor saxophone
Dejan Terzic, drums