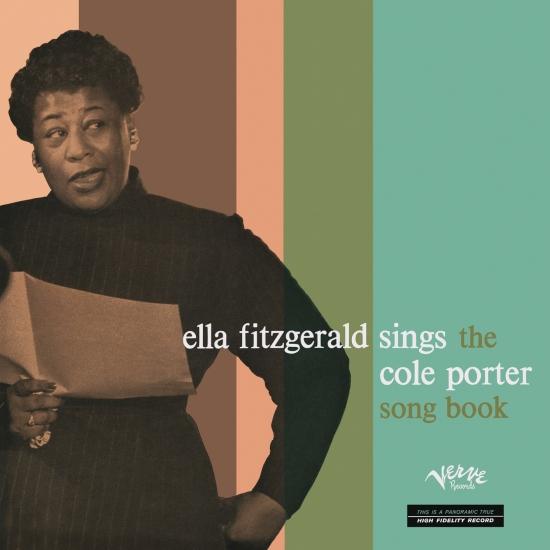 On 7 February 1956, two weeks after Ella Fitzgerald’s first session for Verve records, she was back in the studio with Buddy Bregman and an orchestra recording what is arguably the defining record of her career, one that helped Verve to become the quintessential jazz label of the 1950s.
Ella, Norman Granz and Bregman went to Capitol’s studio in Hollywood and spent three days recording what was to be Ella Fitzgerald Sings The Cole Porter Songbook. The combination of Ella and Porter is irresistible and whether up-tempo or down-tempo, Ella’s three-octave range voice soars effortlessly as she makes each song come to life. It was all helped by the cream of L.A. session men and Buddy Bregman’s arrangement that oozes sophistication way beyond his twenty-four years. It is a perfect record.
"I realized then that there was more to music than bop. Norman felt that I should do other things, so he produced the Cole Porter Songbook for me. It was a turning point in my life." (Ella Fitzgerald)
Granz had initially wanted Nelson Riddle to do the arrangements for Ella, but he refused, probably because he was committed to Frank Sinatra’s recording career at this point. Granz, while taking a chance on Bregman, would later reveal to his biographer Ted Hershorn that he was not at all bothered about the band’s arrangements. It was all about Ella’s voice.
"When I recorded Ella, I always put her out front, not a blend. The reason was that I frankly didn’t care about what happened to the music." (Norman Granz)
That thinking does a disservice to Bregman’s arrangements; they provide the perfect musical cushion and accentuate the melodies of Porter’s wonderful songs. Among the cream of West Coast session musicians, many of whom graced the fabulous recordings that Frank Sinatra was making around the same time, are trumpeter, Harry ‘Sweets’ Edison, Milt Bernhart’s trombone, Herb Geller, and Ted Nash and Bud Shank doubling on clarinets and saxophone, as well as trumpeter Maynard Ferguson.
Two weeks before recording Ella’s version of ‘I’ve Got You Under My Skin’, Edison and Bernhart had recorded Nelson Riddle’s arrangement of the song with Sinatra, the one featuring the trombonist’s fabulous solo.
The thirty-two tracks, Ella Fitzgerald Sings The Cole Porter Songbook, came out on 15 May 1956 as a double album and sold for $9.96. By July it had made No. 15 on the Billboard Best Sellers list after Verve had taken an extensive advertising campaign in Esquire, The New Yorker, High Fidelity and a dozen Sunday Newspapers across America. In September Ella was the headliner on the annual JATP autumn tour of America. By the end of the year the double LP was No. 18 on the list of Best Sellers for the whole year, one that was dominated by soundtrack albums.
If for any reason you've never listened to this album you are missing one of the great recordings of the 20th century, if you have heard it you'll know what they've been missing…
The year 1956 documented a great chapter in the history of jazz music: Norman Granz founded his third label, VERVE, managed to win Ella Fitzgerald (who has deserted DECCA) and initiated the Songbook Series which not only attracted a totally new listening public, but also established Ella’s reputation as the First Lady of Song.
The Cole Porter Songbook marked the glorious beginning of a series which finally expanded to seven titles. The recording’s success was practically a foregone conclusion. Porter had written hundreds of wonderful songs from which Granz made an initial choice of 50 songs before Ella and the bandleader and arranger Buddy Bregman finally decided upon what was, for them, the crème de la crème. The result was a list of 32 songs, all of which make easy listening not only thanks to their melodic originality and harmonic genius but particularly to the wonderful amalgamation of the text - which Porter always wrote himself - and the music. Each and every one is a classic in its own right. Bregman’s arrangements never seek to disguise the fact that all these songs originated on Broadway, and Ella proves her greatness by finding something new in such old favorites as "Night and Day," "I Love Paris" and "I Get A Kick Out Of You." And as if that wasn’t enough, Bregman’s orchestra sounds absolutely splendid.
„Ella Fitzgerald had the ability to personalize some of the most recognizable material from the foremost songwriters in American popular music history. In this instance, the combination of Cole Porter's words and Fitzgerald's interpretation of them created one of the most sought after sessions in vocal history -- embraced by jazz and pop fans alike, transcending boundaries often associated with those genres. Originally released in 1956 on the Verve label, such standards as "Night and Day," "I Love Paris," "What Is This Thing Called Love," "I've Got You Under My Skin," "You're the Top," and "Love for Sale" secured one of Ella Fitzgerald's crowning moments. The success of these early Porter (and previous Gershwin) sessions brought about numerous interpretations of other songbooks throughout the next several years including those of Rodgers and Hart, Duke Ellington, Johnny Mercer, Harold Arlen, and Irving Berlin.“ (Al Campbell, AMG)
Ella Fitzgerald, vocals
Buddy Bregman, conductor
Recorded in February and March, 1956 Produced by Norman Granz
Digitally remastered