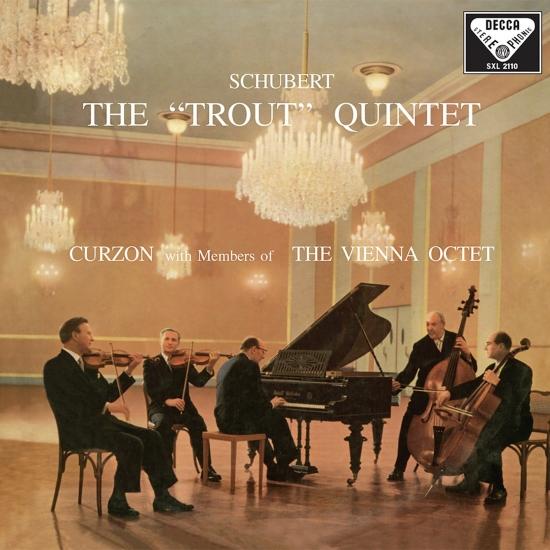 Artist: Sir Clifford Curzon with Members of The Vienna Octet

In the summer of 1819, Franz Schubert stayed in the Austrian town of Steyr where he began work on the composition of the five-movement Piano Quintet in A major, op. 114 (D 667) which was commissioned by the cellist Sylvester Paumgartner. The work was completed in the autumn and soon achieved great popularity under the name of Trout Quintet, which it owes to the Andantino fourth movement — a set of variations on the song of the same name.
The work has remained highly popular right up to the present day and so it comes as no surprise to find this highly praised recording, made with such renowned artists as the pianist Clifford Curzon, the violinist Willi Boskovsky and other members of the Vienna Octet, being reissued.
The ensemble's refreshing performance reflects the sparkling lightness and virtuosity of the work. The well-balanced recording with its full tone certainly deserves a place in every music lovers collection.
"The Vienna Octet's remake, recorded with Sir Clifford Curzon in 1957 when Boskovsky was still leading, is one of those gramophone classics difficult to knock off its perch." (Gramophone)
This performance has been much admired by critics since its arrival nearly 30 years ago. An English pianist and Viennese chamber ensemble make the most of Schubert’s melodies and rapid changes of harmonic color. The sound quality of the record is like having the musicians in for an evening of music in your house.
Sir Clifford Curzon, piano
Willi Boskovsky, violin
Günther Breitenbach, viola
Nikolaus Hubner, cello
Johann Krump, double bass
The Vienna Octet
Digitally remastered 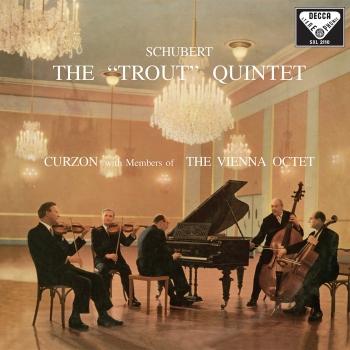 Sir Clifford Curzon with Members of The Vienna Octet

Sir Clifford Curzon (1907-1982)
was born in London, and began studying piano at the age of six. He chose the piano, he said later, ''because you can be alone with a piano.'' The prodigiously talented student went on to train with Britain's leading teachers and later with the world's greatest masters, Arthur Schnabel in Berlin and Wanda Landowska and Nadia Boulanger in Paris.
He entered the Royal Academy of Music in London at the age of 12 and established himself as a star pupil by winning two scholarships. He made his first public appearance in London when he was 16, and soon thereafter began teaching at the Royal Academy and was a full professor by 19.
Mr. Curzon toured the Continent with leading European orchestras in the 1930's and appeared in many British music festivals. After his debut in Town Hall in 1939, Mr. Curzon returned to the United States in 1948 and performed here frequently until 1970, both in recitals and under such conductors as Bruno Walter. His recordings have been among the classics best sellers in this country for a quarter of a century.
One of Sir Clifford's last appearances in the United States was with the Philadelphia Orchestra under Eugene Ormandy on May 2, 1978. Harold C. Schonberg, then chief music critic of The Times, wrote of the pianist's performance of Mozart's Piano Concerto No. 24 in C Minor: ''The performance had logic, strength and integrity. The strength was manifest not in outsized dynamics but in the way a phrase uncoiled, inevitably finding its way into the total structure of the piece. This kind of tensile strength, so necessary in Mozart, is the secret of only a few living musicians.''
Sir Clifford's repertory included more than 50 concertos and ranged from early classics to contemporary works. Critics generally agreed that few artists could match him in total performance and in the superbly high level of artistry he offered his listeners. Among his most enthusiastic American fans was Virgil Thomson, the composer and the longtime music critic of The New York Herald Tribune. Mr. Thomson considered Mr. Curzon ''the most satisfactory interpreter'' of the piano's Romantic repertory, and he once wrote that ''certainly no one brings to life Schubert and Schumann with quite the delicacy and the grandeur of Mr. Curzon.'' Mr. Thomson added that the pianist's ''tender grace and grand perspective of expression all made his rendering both a message and a monument.''
Olin Downs, a late music critic for The New York Times, also wrote many laudatory notices of Mr. Curzon's performances. He summed up his appreciation of Sir Clifford's artistry in a review of a recital featuring the works of Mozart, Schubert and Schumann in Town Hall in January 1950: ''He is indeed a musician among musicians, whose sense of style is partly the result of his exceptional knowledge of his art, but is more the result of that intuition which far surpasses in its penetrating truthfulness any book learning or wise exercises that a healthy mind needs.''