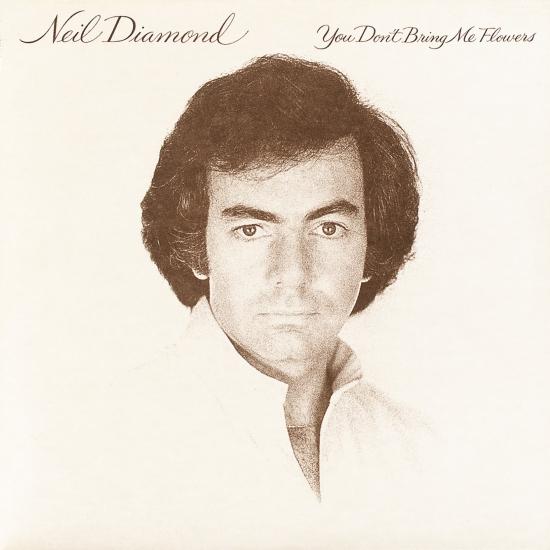 Info for You Don't Bring Me Flowers (Remastered)

Containing one hit single in the nostalgic "Forever in Blue Jeans," one characteristic opus in the panoramic "American Popular Song," and one bona fide classic in its title track, a duet with Barbra Streisand, „You Don't Bring Me Flowers“ is a classic collection of solid mid-1970s Neil Diamond songwriting, notwithstanding that on many of the cuts Diamond appears to have been hit with the disco stick. There's even a real oddity in the "Dancing Bumble Bee/Bumble Boogie," a bizarre disco take on Rimsky-Korsakov's "Flight of the Bumble Bee," and a similar version of the Fortunes' '60s hit "You've Got Your Troubles, I've Got Mine." But it's the singer's duet with Streisand that steals the show here, a timeless piece of '70s pop balladry that's still capable of jerking a tear decades later.
„Neil Diamond -- the voice, the artist, the entertainer -- is best described through this record as a rhapsody of American pop culture during this period in the late '70s. Directly and appropriately, Diamond sings with sincerity that "the American popular song goes on." Perhaps this record best demonstrates a mission statement of creating an endearing work of music that all Americans can feel happy and satisfied with. Much of the material is uplifting, both in tempo and lyrical expression. Other songs are emotionally gripping and romantically involved. The work as a whole seems to be vintage Diamond, and does not stand out from any of his other records as unique. However, there is one duet that breaks the mold: his passionate showing with Barbra Streisand on the cover song, "You Don't Bring Me Flowers," a slow, powerful, and troubling ballad for those drifting out of relationships. "Forever in Blue Jeans" is the anthem that caught on with easy pop listeners in the late '70s, and continues to be a staple song for Diamond. "Remember Me" is a gentle song of longing and memories concerning past friendships, past loves, and places traveled. The typical Diamond sound is expressed here to perfection, with the vocals of Diamond backed by a stirring and articulate orchestra. The record doesn't dive into any deep ocean of creativity, nor does it strive to meet jazzier expectations. The arrangements and the songwriting are written just well enough to appeal to the easy listening audience, and the marching percussions of Diamond's songs fit the grade. Such a well-performed song of percussion and charging tempo is the cover, "You've Got Your Troubles." Sung with passion and grace, this is Neil Diamond during his peak, and merits a listen for all late-'70s enthusiasts.“ (Shawn M. Haney, AMG)
Neil Diamond, vocals
Linda Press, vocals
Barbra Streisand, vocals
Richard Bennett, guitar
Doug Rhone, guitar
Tom Hensley, piano, keyboards
Alan Lindgren, piano, synthesizer
Reinie Press, bass
Dennis St. John, drums
Vince Charles, percussion
King Errisson, percussion
Maxine Willard Waters, background vocals
Julia Tillman Waters, background vocals
Engineered by Rick Ruggieri, Ron Hitchcock
Produced by Bob Gaudio
Digitally remastered