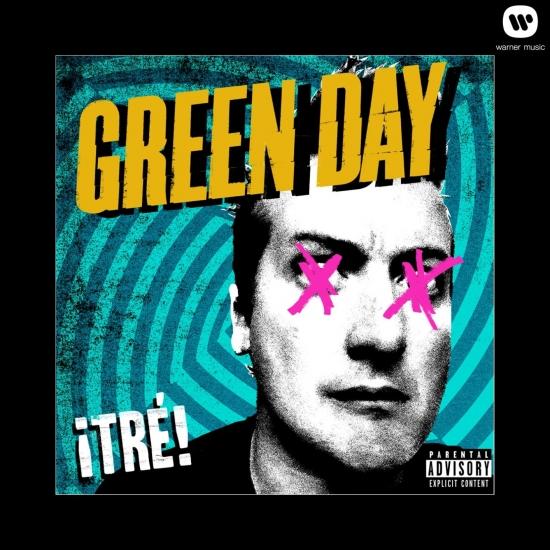 Green Day’s ¡Tré! is the finale to their trilogy of new albums this year, and it’s easily the best of the bunch. Branching out a bit from the tried-and-true formulas of ¡Uno! and the disappointing ¡Dos!, ¡Tré! instead packs some of the strongest material the band’s written in years. It’s more of a ‘rock’ album than the others, eschewing the attempts at garage-rock and snotty punk that characterized the previous two installments.
Opener Brutal Love (featuring a steady rhythm and an almost doo-wop vibe) is an understated but welcome intro to the record, while the catchy Missing You is single material. 8th Avenue Serenade is one of the highlights of the record, its stop-start rhythm twisting and turning into a handful of different melodic passages solidly.
The low-key and emotive Drama Queen leads into X-Kid, which just might be the strongest song from all three of these albums combined. A relentlessly catchy alternative-pop song led by a familiar guitar lead, it starts with Armstrong’s vocals set to the riff, before drums and backing vocals come in full force. The whole thing is infectious, its melancholy “looking back on younger days” theme driven home by the music, which harkens back to some of the mid-tempo numbers from 1997’s Nimrod.
Other key tracks: Little Boy Named Train, Walk Away (another melodic slower song featuring great group vocals), Dirty Rotten Bastards (a medley that changes structures & speeds frequently, like those featured on American Idiot), and 99 Revolutions (Who-like power chords & a fast pace).
Overall, ¡Tré! is one of the strongest full Green Day albums in years – the filler is few and far between (unlike ¡Uno! and ¡Dos!, which both featured a few forgettable, throwaway numbers).
When Green Day announced this trilogy of new albums, many figured “oh great, there will be a few good songs and a bunch of unnecessary stuff” – which was true, overall, when considering the first two entries. ¡Tré!, however, should leave fans satisfied and relieved that the band is still capable of crafting a whole album’s worth of good tunes.
There’s no telling what happens next for Green Day – they haven’t been able to really tour for these albums due to Armstrong’s current bout with rehab – so if ¡Tré! is the last album from them for a while, it wouldn’t really be a bad thing considering how strong it is as a whole." Rating: 4 out of 5. (Adrian Garro, www.rockcellarmagazine.com)
Billie Joe Armstrong, vocals, guitar, piano
Mike Dirnt, bass, vocals
Tre Cool, drums, percussion

In 1987 friends Billie Joe Armstrong and Mike Dirnt created a band named Sweet Children. Their first show of note took place in October of that year at Rod’s Hockey Pit in California. A year later John Kiffmeyer joined their band as a drummer and business manager, helping them create a local fan base. They were signed to Lookout! Records after the owner, Larry Livermore saw them play in one of their earlier shows. In order to avoid confusion with the band Sweet Baby, they changed their name. The band now known as Green Day was born. The name is supposedly related to their liking of marijuana.
Lookout! released their first album in 1990 named 39/Smooth. Included with the album was a letter supposedly from I.R.S. Records saying they had tried to sign Green Day. The band included a response saying they were loyal to Lookout!. Their response called I.R.S. “cheesy and washed up.” Later in 1990 Green Day released Slappy and Sweet Children. Also in 1990 John Kiffmeyer left the band to attend college. Tré Cool, the drummer from The Lookouts became Green Day’s temporary replacement. Once it was apparent that Kiffmeyer did not plan to return, Tré Cool took up the role as permanent drummer. In 1991, 1,039/Smoothed Out Slappy Hours, a compilation of 39/Smooth, Slappy and 1,000 Hours albums. For most of 1992 and 1993, the band was on tour which included shows in Europe. In 1992, their album Kerplunk sold fifty thousand copies in the United States. This was impressive for the independent punk band.
The success of Kerplunk drew interest from major record companies to Green Day. They decided to leave Lookout! records and sign with Reprise Records under the producer Rob Cavello. This move gave them the name sellouts in the eyes of many punk fans. This did not stop them as they went on to release Dookie. The album was recorded in three weeks and was an immediate success. The airtime given to “Longview,” “Basket Case,” and “When I Come Around” by MTV aided this success greatly. Every one of those songs hit number one on Modern Rock Tracks charts. That same year marked their nationwide tour accompanied by the bands Queercore and Pansy Division. Green Day played at both Lollapalooza and Woodstock 1994. The later performance jump started their publicity and recognition nationwide. In 1995, Dookie won the Grammy for Best Alternative Album.
In 1995, the single “J.A.R.” went right to the number one spot on the Modern Rock Track chart. The album Insomniac quickly followed in the fall of 1995. Insomniac was much darker than the band’s previous work. It did well, getting four of five stars from Rolling Stone Magazine. One of the songs on this album referred to the bands thought that they have gone too commercial in their music. Insomniac was not as successful as Dookie, but it still managed to sell seven million copies in the United States. It also won the band award for Favorite Artist, Favorite Rock Artist and Favorite Alternative Artist in 1996 at the American Music Awards. The video for “Walking Contradiction” was nominated for Best Video, Short Form and Best Special effects at the MTV Video Music Awards. After this, the band pulled out of a European tour, citing their exhaustion.
The band took a break in 1996 and picked up working on a new album in 1997. Right from the beginning, they agreed that the album had to be different than their previous work. The experimental album was labeled Nimrod, released in 1997. The album had a wider variety of music, punk rock, surf rock, ska and an acoustic ballad. Nimrod hit number ten on the charts due to the popularity of “Good Riddance (Time of Your Life).” This same song won an MTV Video award for Best Alternative Video. The video focused on major changes in the lives of a variety of people, overlaid by the guitar part. Other songs from Nimrod included “Nice Guys Finish Last,” “Hitchin’ a Ride,” and “Redundant.”
Warning was released in 2000, which followed the same style change as Nimrod. All Music Guide gave it a four point five out of five, saying that while not innovative, it was a satisfying endeavor. The Rolling Stone magazine was harsher in their rating of a three out of five. They cited the band’s previous hard core work and claimed that people would not want to listen to the lighter style of music from Green Day. Despite the hits, “Minority” and “Warning,” fans began to lose interest in the band because of the album Warning. Most of Green Day’s work had previously hit double platinum, Warning only warranted gold.
In 2001 at the California Music Awards Green Day was nominated for eight different awards, they won them all, those awards were Outstanding Album, Outstanding Punk Rock/Ska Album, Outstanding Group, Outstanding Male Vocalist, Outstanding Bassist, Outstanding Drummer, Outstanding Songwriter and Outstanding Artist. The release of warning was followed by their greatest hits album International Superhits! and an assemblage album called Shenanigans. These sold well, reaching platinum in the United States. Shenanigans was nominated for a Grammy for best Rock Instrumental Performance.
In the summer of 2003 the master tapes with all twenty songs for their new album tentatively called Cigarettes and Valentines was stolen from the studio. Instead of redoing the album, decided to make another, even better album. That same year, they worked with Iggy Pop on two songs on his new album Skull Ring. It was then that the band had serious talks to work out some issues they had with the other members. American idiot was the result and was released in 2004. It hit number one on the Billboard charts, marking the first time Green Day had such a rating. It was commonly called a “punk rock opera” following the “Jesus of Suburbia.” It won the Grammy in 2005 for Best Rock Album and took seven of eight awards in the 2005 MTV music awards.