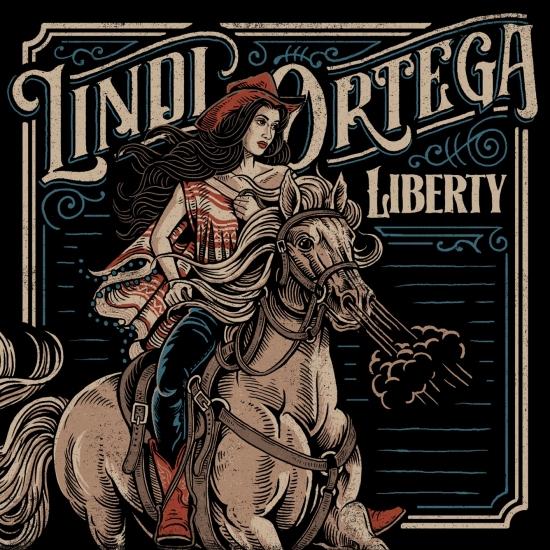 Lindi Ortega "has always been the sonic embodiment of the red cowboy boots she's often seen wearing: a fiery and dramatic take on modern country that's impossible to ignore" (Rolling Stone Country), and her fifth studio record 'Liberty' is no exception.
Ortega wrote roughly half of the twelve tracks solo, and enlisted co-writers Aaron Raitiere, Bruce Wallace and John Paul White (The Civil Wars) for the rest. The result is a three-part concept album reflecting loss, séance, resurrection and freedom.
Recorded at Battle Tapes studio in East Nashville, Ortega and Skylar Wilson (Justin Townes Earle, Rayland Baxter) scaled back the boot-stomping, throwback country approach that she's known for, instead polishing a set of music that reflects her Mexican lineage.
Ortega and Wilson - who first bonded over their shared passion for Quentin Tarantino movies - then enhanced the sonic landscape with the help of Country Music Hall of Fame member Charlie McCoy's signature harmonica and Nashville-based band Steelism, drawing on the epic work of Oscar-winning composer Ennio Morricone, who became one of Ortega's musical obsessions during the writing and recording of 'Liberty.'
"Country's crystalline-voiced goth-rock version of Dolly Parton" (MAGNET)
"The pipes of Patsy Cline with the visual flair of Amy Winehouse" (The Washington Post)
"Genre-defying in both her music and her personal style" (NPR's All Things Considered)
"In the early 2010s, Canadian born alt-country singer/songwriter Lindi Ortega had had enough. Discouraged with not being able to make a living despite having charting records, Juno and Grammy nominations, critical acclaim, and endless touring, she chucked everything: Nashville, her label, her agent, and her manager, and moved to Calgary. She got married and, inspired by her husband and new manager, tried again, resulting in 2017's acclaimed Til the Goin' Gets Gone EP.
Liberty, her cinematic seventh album, is the story of that journey. It's a concept record about a journey through darkness to light. Its songs are thematically linked as stages in transition. Inspired by the spaghetti western scores of Ennio Morricone, Bruno Nicolai, and Nico Fidenco, and the unruly movies of Quentin Tarantino, she returned to Nashville to work with producer Skylar Wilson -- the two bonded over Tarantino's films -- and wrote or co-wrote songs with him, John Paul White, Bruce Wallace, and Aaron Raitiere. She also enlisted Steelism (Spencer Cullum, Jr. on pedal steel and slide, and guitarist Jeremy Fetzer), a Nashville duo whose predominantly instrumental work gravitates toward a widescreen western style of country. The three sections of the uncharacteristically ballad-heavy Liberty are held together by Steelism's windswept desert theme "Through the Dust." "Afraid of the Dark," co-written with White, offers fingerpicked nylon string and electric slide guitars, upright bass, and tom-toms; the grain in Ortega's voice offers a tale of possession by darkness through self-loathing and depression. A whining steel guitar frames her reverbed singing in a spacious Western, desert-tinged soundscape with the baritone and soprano Liberty Choir chorus adding to the atmosphere. The traces of her rockabilly style pop up in "You Ain't Foolin' Me," which addresses two-faced acquaintances masquerading as friends amid rumbling drums, B-3 organ, and distorted guitars, as well as a lovely mariachi interlude. The other White co-write is "Nothing's Impossible," a lilting, deeply sad honky tonk ballad that could have been produced by a young Owen Bradley. First single "The Comeback Kid (written with Wilson) draws on Marty Robbins, Leon Payne, and Charlie Feathers in a yarn about a character who gets shot but doesn't die, and who's now ready to haunt her would-be assassins: "...You took my life and wrecked it/But I've been resurrected...." (Think Uma Thurman in Kill Bill.) "Forever Blue" is the first song on the journey to the light. Transcendence and transformation are hinted at first in the ethereal "In the Clear," co-written with Raitiere, and episodes of romantic love in "Pablo" and Lovers in Love" offer confirmation that our protagonist is on the right track. Her transition is completed in the languid title track and underscored by the album's lone cover, "Gracias a la Vida," by Chilean composer Violeta Parra; it's a bolero-cum-mariachi that simply and powerfully expresses gratitude for surviving the darkness and for life and its wonders. While Liberty is more often than not gentler in tone than Ortega's preceding albums, it is by far her most innovative and powerful, and stands as her masterwork thus far." (Thom Jurek, AMG) 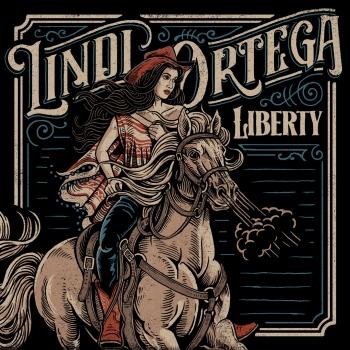 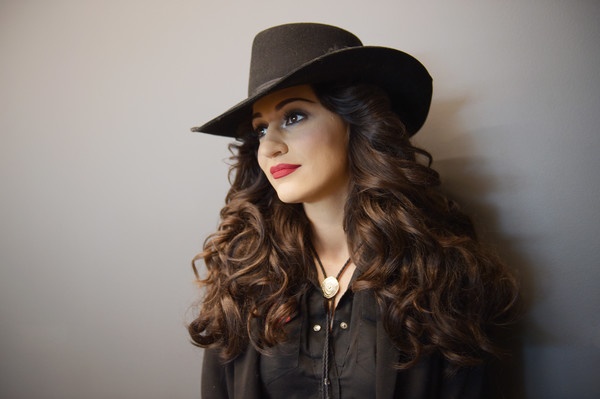 Lindi Ortega
gives fair warning: “Don’t come any closer to my heart /If you’re afraid of the dark.”
However, that shroud is slowly lifted in Liberty. As the narrative unfolds in this concept album, a central character emerges – one who finally sheds the darkness of her past and emerges into the light. As melodies and tempos change throughout Liberty, her journey carries her steadily forward. Listen closely and you’ll find Ortega’s experiences in the lyrics too.
“I think the most important thing for me was that I ended on a very positive note because I've had so many people tell me that my songs helped them through really hard times in their life,” Ortega says. “That struck a chord for me, because just like everybody else, I have had hard times in my life, and continue to have pockets of difficult moments here and there. If I can provide some sort of solace with my music, then that gives me every reason to make music. I wanted this record to be all about helping people through the darkness.”
The melodies and arrangements of Liberty draw on the epic work of Oscar-winning composer Ennio Morricone, who became one of Ortega’s musical obsessions during the writing and recording of Liberty. Moreover she enlisted Nashville producer Skylar Wilson (Justin Townes Earle, Rayland Baxter) when she discovered their shared passion for Quentin Tarantino movies. It is fitting that NPR’s All Things Considered has described Ortega as “genre-defying in both her music and her personal style.”
“I’ve never had a cohesive album like this before,” she says. “This record's quite different in that I'm actually taking a bit of a step back, being softer, having more nuance in the way I'm singing, and it's been a welcome challenge. I went into this creating songs with unpredictable chord changes, which allowed for it to sound more musical and interesting to me.”
During the sessions at Battle Tapes studio in East Nashville, Ortega and Wilson scaled back the boot-stomping, throwback country approach that she’s known for, instead polishing a set of music that reflects her lineage. Her father is Mexican; her mother is Irish. Ortega cites Linda Ronstadt’s album Canciones de mi Padre (translated as Songs of My Father) and her mother’s vinyl collection of ‘70s country songwriters like Dolly Parton and Willie Nelson as major influences in her music today. The sonic landscape of Liberty is enhanced by Nashville band Steelism, known for their dramatic blend of pedal steel guitar and electric guitar, as well as Country Music Hall of Fame member Charlie McCoy on harmonica.
“I wanted to do something musical and cinematic. It was really important for me to expand my horizons and pave new ground for myself,” she says. “This is my first time singing in Spanish. I have always wanted to write chorus for a Spanish chorus for an original song. I won't claim to have the most perfect diction in the world with it. But I can say that I gave it my all, and that I felt very proud to be able to do that, because I'm a huge fan of Mexican culture. It's very different than anything I've done before and I find that really exciting.”
As the album progresses, the listener gets the sense that the protagonist is leaving behind her past, whether it’s a crowd of unsavory characters in “You Ain’t Foolin’ Me” or perhaps a lost love from childhood in “Until My Dying Day.” Grief turns to desperation in “Nothing’s Impossible” and “The Comeback Kid.” The tides begin to turn on “Darkness Be Done.” About halfway through, with “Forever Blue,” the character makes a choice to follow the light.
Meanwhile the song “Pablo” is inspired by her new husband, Daniel Huscroft. With a lilting melody and clever lyrics, “Lovers in Love” showcases Ortega’s skillful songwriting. For Liberty, she composed roughly half of the songs alone. On the remaining tracks, her co-writers include Aaron Raitiere, Bruce Wallace and John Paul White (The Civil Wars).
Throughout her career, Ortega has remained committed to putting on a good performance for her audience. Most nights, she will come out after the show to sign autographs, take photos, and just visit. When she shared her stunning wedding photos on social media, she admits that her followers were quite alarmed. They expressed their concern that the flow of sad songs would come to an abrupt halt. After hearing Liberty, those listeners will realize there was no need to worry.
“When you have experiences that are dark, you can always draw from that well. You don't forget it. You don't erase it -- I don't ever want to erase it because it makes me who I am,” Ortega says. “And it helps me relate to other people who have similar experiences. You can't truly appreciate happiness in life unless you've understood what it's like to feel the opposite way.”
Ortega concludes the album with “Gracia a la Vida” from the pen of Chilean composer Violetta Parra. The title translates as “Thank you to Life.”
“Even though I always tried to have a silver lining, whether it's by making my songs tongue-in-cheek, or writing some dark lyrics to happy music, there's always been an element of balancing light and dark on my previous albums,” Ortega explains. “But this is a full story, and I want everybody to be able to take something away from it at the end of the day.” - Craig Shelburne