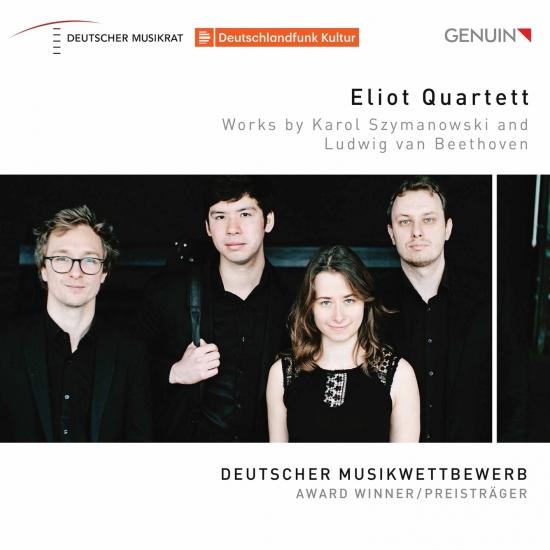 A young Canadian-Russian-German quartet is about to storm into quartet heaven! And thanks to the worthy Primavera Edition, which GENUIN releases in cooperation with the German Music Competition, we are witness to it. The Eliot Quartett plays on Beethoven's dizzying op. 18 No. 1 and contrasts it with Karol Szymanowski's op. 56. The ensemble's crystal-clear yet rich sound already thrilled the juries of competitions in Salzburg, Melbourne, and Katowice as well as the audiences of the German Music Competition 2018. You won't be surprised when you hear this debut: Fantastic!
Eliot Quartett 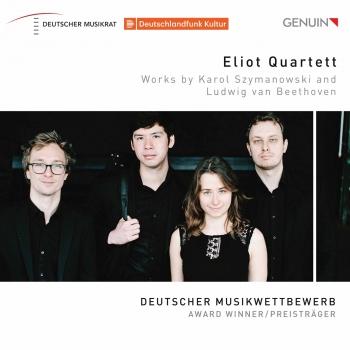 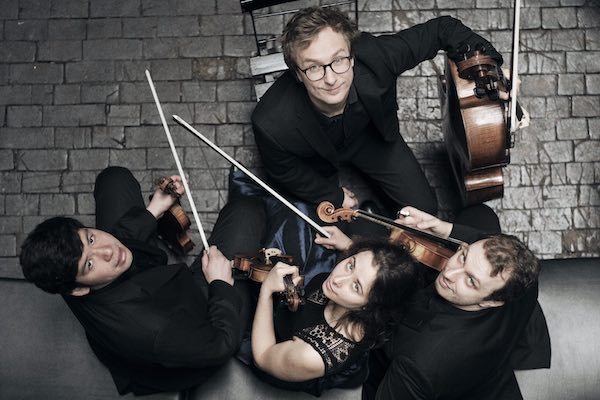 The Eliot Quartett
was founded in 2014 and has become one of the most engaging and promising string quartets of the next generation. Hailing from Canada, Germany and Russia, the quartet’s members formed the group in Frankfurt am Main and have since gone on to win prizes at major national and international music competitions.
In 2018 the Eliot Quartett completed a tour-de-force of the music competition world, winning second prize at both the Mozart International Competition in Salz burg and the Melbourne International Chamber Music Competition, becoming the ﬁrst quartet in 14 years to win the Prize of the German Music Competition as well as three additional special prizes, and capping it oﬀ by winning ﬁrst prize and the special prize for the best interpretation of a piece by Karol Szymanowski at the inaugural International Karol Szymanowski Competition in Katowice, Poland.
The Eliot Quartett has established itself as a ﬁxture within the music scene in its hometown of Frankfurt, Germany. In addition to regular appearances at the Alte Oper, the Polytechnische Gesellschaft concert series and the Schumann Gesellschaft, the Eliot Quartett opened the Streichquartetttage in 2018 at the Holzhausenschlösschen in Frankfurt, where it had the honour of performing six concerts as artist in residence with guests Boris Brovtsyn, Annika Treutler, Laura Ruiz Ferreres, Torleif Thedéen und Maxim Rysanov the following season.
The Eliot Quartett’s concert schedule includes performances at renowned festivals and concert series throughout Europe. It has performed at the Bachfest Leipzig, the Kasseler Musiktage, the Mozartfest Würzburg, the Rheingau Musik Festival, the Ludwigsburger Schlossfestspiele, the Festival Música Sur in Spain, the Styriarte in Graz, the Mozarteum Salzburg and the Schubertiade.
The four musicians began their chamber music instruction with Hubert Buchberger and went on to study with Tim Vogler at the Hochschule für Musik und Darstellende Kunst Frankfurt am Main and with Günter Pichler at the Instituto Internacional de Música de Camera at the Escuela Superior de Música Reina Sofía in Madrid. The Eliot Quartett has received valuable musical guidance from Valentin Erben, Oliver Wille, Martin Beaver, and the Mandelring Quartet and enjoys a close working relationship with the esteemed pianist Alfred Brendel.
The Eliot Quartett is named after the American poet T. S. Eliot whose famous work Four Quartets was inspired by the innovative late quartets by Ludwig van Beethoven. Eliot, like Beethoven, attempted to establish a connection between past, present and future by breaking away from the accepted classical forms of the time.