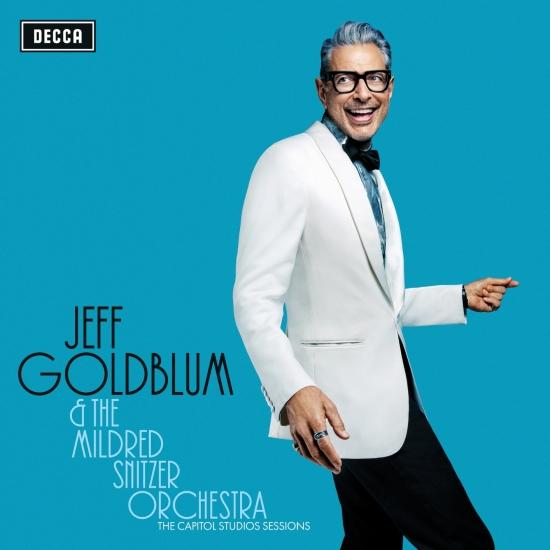 Info for The Capitol Studios Sessions

Jeff and The Mildred Snitzer Orchestra come to London next month for their first ever UK live shows, which have sold out immediately. They will perform at Ronnie Scott’s and Cadogan Hall, as part of the ESG London Jazz Festival, before taking the show to venues in Paris and Berlin (see details below).
Goldblum, who has been playing the piano since he was a child, has performed with his jazz band at venues in Los Angeles and New York City over the past few decades. When he’s not filming, the actor hosts a weekly jazz variety show at LA’s Rockwell Table and Stage. Frequented by locals and A-listers alike, the show intersperses Goldblum’s love of jazz with his passion and skills at improvised comedy.
The atmosphere and energy of these shows is captured perfectly on this album, which Jeff credits to producer Larry Klein (Joni Mitchell, Herbie Hancock, Madeleine Peyroux). For the recording, Larry recreated the buzz of The Rockwell at the legendary Capitol Studios. The studio was transformed into a jazz club – food and drink was served to an invited live studio audience of Rockwell regulars, friends and family.
This album lives in that magical area where artists and audiences meet. There is a joyful sense of anything-can-happen and a spirit of creative generosity—in how Jeff speaks to his fans, how he accompanies guest singers and soloists, and especially in how Jeff comps. To Jeff, his role within the context of a jazz band is a seamless connection with his acting:
“I love improvising and that feeling of communication and interplay. It’s one of the cornerstones of my acting technique. I see my music in the same way.” – Jeff Goldblum
‘The Capitol Studios Sessions’ is the realization of this idea: jazz and standards presented in a manner that dares to be high-spirited and to make you feel good. The repertoire includes favourite ‘60s jazz numbers ‘Cantaloupe Island’ and ’I Wish I Knew (How It Would Feel To Be Free)’, the 1940s classic ‘Straighten Up & Fly Right’ with guest vocals from Irish superstar singer and songwriter Imelda May, ‘My Baby Just Cares For Me’ from 1930, featuring American songstress Haley Reinhart and the 1920s song ’Me And My Shadow’ sung by US comedian and actress, Sarah Silverman. The band are joined by the extraordinary Grammy-nominated trumpeter Till Brönner.
Jeff Goldblum and The Mildred Snitzer Orchestra deliver the feel and the swing, and they make it fun, funny, and familiar. Those are words not often associated with jazz, though they still can be, and with this album we are reminded of that.
Jeff Goldblum & The Mildred Snitzer Orchestra 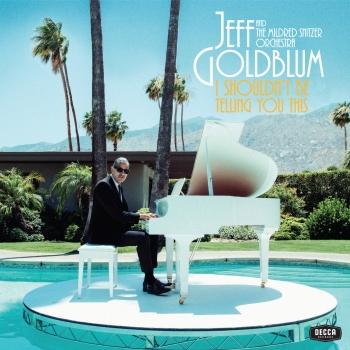 I Shouldn’t Be Telling You This 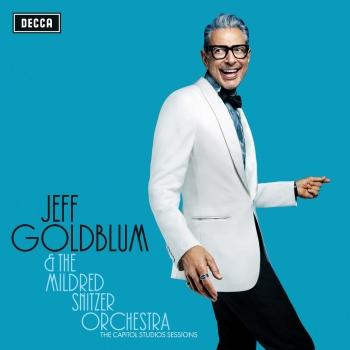 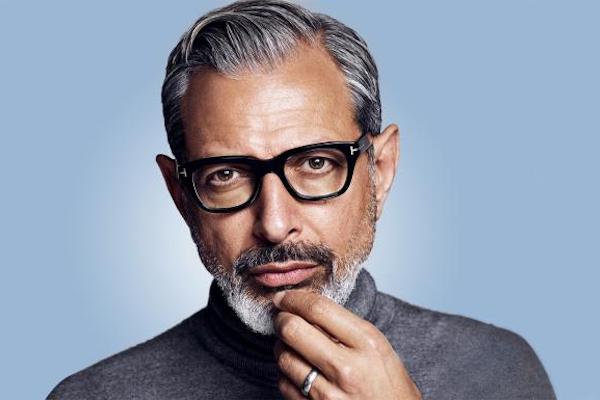 Jeff Goldblum
Born on October 22, 1952, in Pittsburgh, Pennsylvania, Jeff Goldblum studied acting with Sanford Meisner in New York before embarking on a big-screen career. He’s starred in several dozen films, with prominent roles in works like The Fly, Jurassic Park, Independence Day and Morning Glory. Goldblum is also a noted actor of stage and television, having been part of the cast of Law & Order: Criminal Intent.
Jeffrey Lynn Goldblum was born on October 22, 1952, in Pittsburgh, Pennsylvania. He knew from a young age that he wanted to pursue acting, but initially kept his passion a secret from his family and friends. During his adolescence he had the chance to take up drama during summer sessions at Carnegie Mellon University, and, at age 17, made his way to New York City, subsequently studying with Sanford Meisner. The statuesque 6’4″ Goldblum performed in stage productions before making his way to film, garnering small parts in 1970s fare like Death Wish (1974), California Split (1974), Nashville (1975) and Annie Hall (1977). He continued his trade in other big-screen projects like Invasion of the Body Snatchers (1978) and Threshold (1981), and on TV vehicles like the movie The Legend of Sleepy Hollow (in which he played Ichabod Crane) and the detective TV series Tenspeed and Brown Shoe, both from 1980. He later co-starred as a seedy journalist in the acclaimed 1983 drama The Big Chill with Glenn Close, William Hurt and Meg Tilly.
Jeff Goldblum went on to star with Geena Davis in the horror comedy Transylvania 6-5000 (1985). The two embarked on a romance, eventually tying the knot in 1987. (Goldbum had been married previously.) The couple again worked together in David Cronenberg’s remake of the horror classic The Fly (1986). Goldblum earned raves for his portrayal of a scientist who undergoes a terrifying bodily and psychological transformation. Davis and Goldblum next co-starred together in the brightly hued extraterrestrial comedy Earth Girls Are Easy (1989). The two divorced in 1990 and remain friends. Continuing to explore a variety of parts, Goldblum starred in two of the biggest blockbusters of the 1990s: He portrayed yet another scientist, Ian Malcolm, in Steven Spielberg’s Jurassic Park (1993), and reprised the part in the 1997 sequel The Lost World. He dated Park co-star Laura Dern for a time, as well. In 1996, Goldblum was featured as a world-saving computer whiz in the sci-fi/action film Independence Day, co-starring Will Smith and grossing more than $800 million worldwide. During the mid-1990s, Goldblum earned an Academy Award nomination for his work in creating the live action film short Little Surprises.
Goldblum didn’t continue down the blockbuster path, instead taking on a mix of roles that included indie fare, comedies, voiceover work and thrillers. He co-starred with Susan Sarandon in the critically acclaimed, cynical comedy Igby Goes Down (2002), and portrayed a rival, genteel oceanographer in The Life Aquatic With Steve Zissou (2004). Other films on his long roster have included Fay Grim (2007), The Switch (2010) and Morning Glory (2010).
Goldblum has also returned to TV. He was nominated for a 2005 Emmy for his guest-starring role on NBC’s Will & Grace and in 2009 he joined the cast of Law & Order: Criminal Intent as Detective Zack Nichols. He is noted for his stage work as well, having performed in works like The Pillowman, Seminar and a London revival of Neil Simon’s The Prisoner of Second Avenue. Goldblum teaches acting at Playhouse West in Los Angeles—which he co-established in the early 1980s—and is a noted jazz pianist, having performed as a solo artist and with the Mildred Snitzer Orchestra.