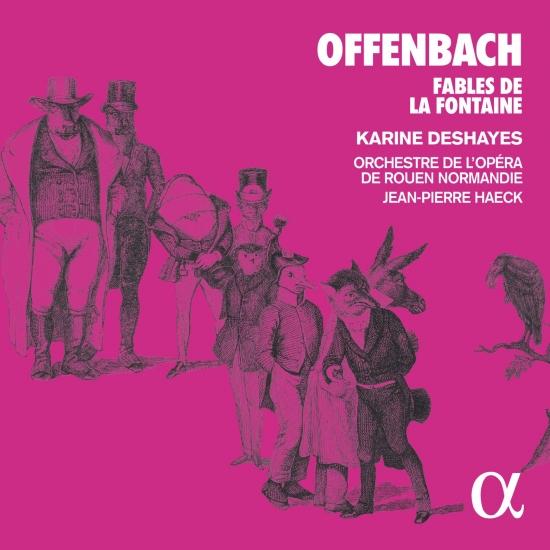 A grasshopper, a milkmaid’s pail, a shepherd, a fox, a country mouse, a cobbler... These are just some of the diverse and varied characters from the famous Fables that Jacques Offenbach decided to set to music in 1842, some 150 years after they were written by Jean de La Fontaine. With their vivid texts featuring talking animals and stock characters, the Fables offered an allegorical and didactic way of alluding to the court and the mores of the time. Offenbach chose six of the 240 Fables of la Fontaine to set as mélodies. Here the conductor Jean-Pierre Haeck presents them in his own orchestration performed by the Orchestre de l’Opéra de Rouen and the mezzosoprano Karine Deshayes, who excels in this repertory. To complete the programme, the singer performs numbers from Offenbach’s opéra-bouffe Boule-de-neige and the orchestra plays movements from the ballet Le Papillon, offering listeners a recording as refined as it is witty.
Karine Deshayes, mezzo-soprano
Orchestre de l'Opera de Rouen Haute-Normandie
Jean-Pierre Haeck, conductor 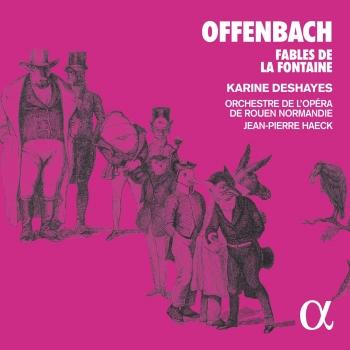 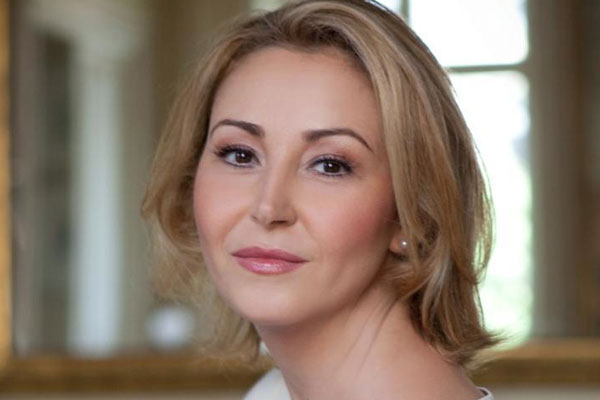 Karine Deshayes
After brilliant musical studies having been a pupil of Mireille Alcantara and receiving advice from Régine Crespin, Karine Deshayes first joined the troupe of the Lyon Opera, where she performed in the roles of Cherubino, Stephano, among others, and especially in her first Rossini role as Rosina.
His career quickly took off afterwards. She was invited to perform on all the major French stages: Avignon, Lyon Strasbourg, Marseille, Toulouse, Tours, Chorégies d’Orange, Bordeaux etc. She regularly performed at the Paris Opera where she won great acclaim in the Rossini roles of Angelina, Rosina, Elena, but also as Poppea in L’incoronazione di Poppea, Sesto (Giulio Cesare), Romeo (I Capuleti e I Montecchi ) and in the Mozart roles of Cherubino and Dorabella. It was also at the Paris Opera that she took on the role of Carmen for the first time, as well as the role of Charlotte in Werther.
Karine Deshayes’s career has also extended into major international stages, including the Salzburg Festival (Die Zauberflöte under the baton of Riccardo Muti), the Teatro Real in Madrid, and the Liceu in Barcelona (the title role in Massenet’s Cendrillon). At the invitation of the New York Metropolitan Opera, she debuted in the role of Siebel before returning there to play Isolier (Le Comte Ory), and more recently, Nicklausse (Les Contes d’Hoffmann) directed by James Levine, where she drew particularly rave reviews from the New York music critiques. She followed this by performing in the role of Angelina in the Cenerentola at the San Francisco Opera, again to great success.
Subsequently, she has sung the role of Donna Elvira at the Opera of Paris for the first time, a role that she made own, as the public and the critics unanimously Adalgisa (Norma) at the Teatro Real in Madrid, Charlotte (Werther) at the Tchaikowsky Concert Hall in Moscow and. In concert, she beautifully played the role of Elisabetta in Donizetti’s Maria Stuarda at the Avignon Opera.
More recently, she has sung the roles of Romeo (I Capuleti e I Montecchi) at the Marseille Opera House, with a huge success, Rossini's Armida at the Montpellier Opera House, Gluck's Alceste at the Lyon Opera House, Mahler’s Third Symphony with the Orchestre du Capitole in Toulouse, Elvira (I Puritani) at the Festival of Radio France, Montpellier, Marie de l’Incarnation (Dialogue des Carmélites) in Brussels, Semiramide in Saint-Etienne Stephano (Roméo et Juliette) at the Metropolitan Opera, the title-role of Cenerentola at the Paris Théâtre des Champs-Elysées, Urbain (Les Huguenots) at the Opera National de Paris, Elena (Donna del Lago) in Marseille and Marguerite (Damnation de Faust) in Nice, Charlotte (Werther) in Vichy and in Toulouse, Elvira (Don Giovanni) at the Chorégies d'Orange, Adalgisa (Norma) in Moscow, and in Toulouse. Karine Deshayes’s vast repertoire has allowed her to perform regularly in concert and recital under the direction of such conductors as Emmanuel Krivine, David Stern, Kurt Masur, Emmanuelle Haïm, Louis Langrée and Myung-Whun Chung, and with such artists as Philippe Cassard, Renaud Capuçon, Nicolas Angelich, L’Ensemble Contraste, the Quatuor Ebène, the Mahler Chamber Orchestra, and many more.
At the Victoires de la Musique Awards in 2016, Karine Deshayes was named Lyric Artist of the Year for the second time in her career.
Her last recording, « Rossini », with the Ensemble Les Forces Majeures, has just been released (Label Aparté). ​
Future plans include the role of Balkis (Reine de Saba) à l'Opéra de Marseille, Angelina (Cenerentola) à Liège, Marguerite (Damnation de Faust) at the Paris Philharmonie with the Paris Orchestra, Sara (Roberto Devereux) at the Paris Théâtre des Champs Elysées, The Composer (Ariadne auf Naxos) in Montpellier, Elisabetta (Elisabetta Regina d'Inghleterra) in Pesaro and many concerts and recitals.