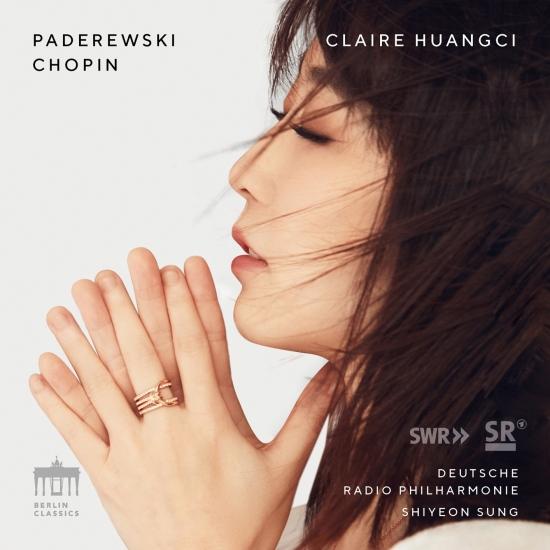 Claire Huangci went from being "clearly a pianist to follow" (Gramophone Editor's Choice, September 2015) to the status of internationally established and acclaimed young pianist even before winning the Mozart Prize at the Concours Géza Anda in 2018. Following on from four successful solo albums – from arrangements of Russian ballet music through Scarlatti to Chopin's complete Nocturnes and all of Rachmaninoff's Preludes – she now releases her first orchestral disc with Berlin Classics. Together with the aspiring young South Korean conductor Shiyeon Sung and the Deutsche Radio Philharmonie Saarbrücken she plays Chopin's Piano Concerto No. 1 and contrasts it with Paderewski's concerto.
Chopin's Piano Concerto No. 1 is well established on the world's concert platforms. Huangci is well aware that there are two sides to Chopin: the man who composed the piano concerto and the creator of the Nocturnes. In comparison to Chopin, Paderewski is relatively unknown, yet he was an intensely interesting man and his piano concerto is rich in ideas and resources. Claire Huangci is therefore mystified as to why it is so seldom performed. "I really don't understand why it isn't one of the standard bearers of the piano concert repertoire."
The configuration of the recording is ideal: two artists who composed their works early in their careers, interpreted by an equally young pianist. Huangci perceives the youthful verve of the compositions: "Both composers exude a true joie de vivre, a love of life, attributable to their youth. The concertos were clearly written by men who looked with hope to the future." She brings the same youthful elan to her interpretation. That attribute which the press praised in her previous album is audible here too: there is never any vague waffle, any pompous metamorphosis; all is crystal clear throughout, and always nuanced.
The album radiates intrinsically in two different directions: one of the best known works for solo piano and orchestra offers a comparative approach to the lesser-known work. And in doing so, hitherto unheard aspects of the "classic work" are revealed.
Shiyeon Sung, piano
Deutsche Radio Philharmonie