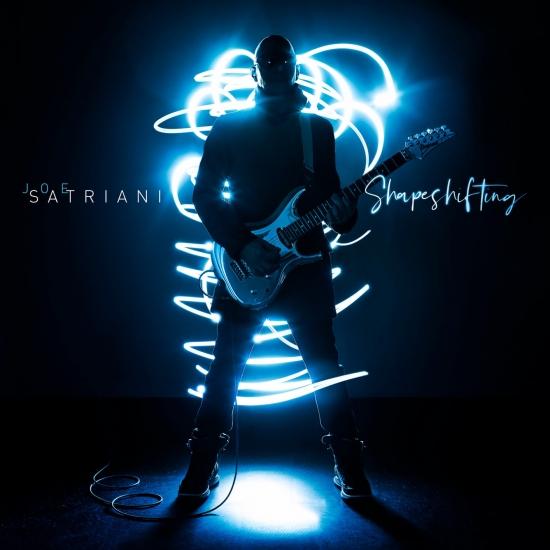 Shapeshifting was co-produced by Satriani and Jim Scott (Foo Fighters, Red Hot Chili Peppers, Tom Petty & The Heartbreakers) with longtime associate John Cuniberti on board handling the mastering duties. Satriani enlisted a wide range of collaborators, both old and new, to help him bring the songs to life. Legendary drummer Kenny Aronoff (John Fogerty), bassist Chris Chaney (Jane’s Addiction) and keyboardist Eric Caudieux were the core musicians on the new album with additional contributions coming from Lisa Coleman (The Revolution) and Christopher Guest.
The retro feeling sounds of first single, “Nineteen Eighty” finds Satriani spiritually revisiting the time period when he was working with his first band, the Squares. The future guitar hero the world came to know less than a decade later, would have to wait. He recalls that in those early days, they “dialed back the guitar solos and histrionics to try to create a cooler new wave vibe.” Decades removed from those goals, he was free to go forward and attempt to recapture what was on his mind in 1980.
Staying true to the sounds of the time, he even used a vintage MXR EVH phaser. “I’ve always been a huge fan of Eddie Van Halen,” Satriani says. “In my mind, he just crystallized that era. The late ‘70s and early ‘80s, he kind of saved rock guitar. So that’s what I would have been doing.”
"This new release is undoubtedly an intentional response to Joe’s previous record, which was a very consistent rock-oriented record that lacked this record’s range of flavors but held up really well thanks to great songs and performances by Satch, as well as Glenn Hughes on bass and Chad Smith on drums. “Shapeshifting” features a different-but-very-talented rhythm section, a lot more stylistic territory, and some tasteful moments that slot it as a fun and unique addition to the Satriani cannon, even if for some die-hard hands it might be missing that one standout track that’s essential Satriani listening." (Alan Cox, sonicperspectives.com)
Joe Satriani, electric and acoustic guitars, banjo, whistling, claps
Chris Chaney, basses, additional rhythm guitar on "Falling Stars"
Kenny Aronoff, drums
Eric Caudieux, keyboards, sound design, editing, percussion, whistling, claps
Lisa Coleman, piano on "Waiting" and "Yesterday's Yesterday"
Christopher Guest, mandolin on "Yesterday's Yesterday"
Jim Scott, percussion, whistling, claps
Neil Baldock, claps
Recorded and Mixed by Jim Scott and PLYRZ Recording Studio Valencia
Additional engineeering by Kevin Dean, Neil Baldock and Benjamin Knapp
Additional recording at Studio 21, San Francisco by Joe Satriani
Mastering by John Cuniberti
Produced by Jim Scott and Joe Satriani