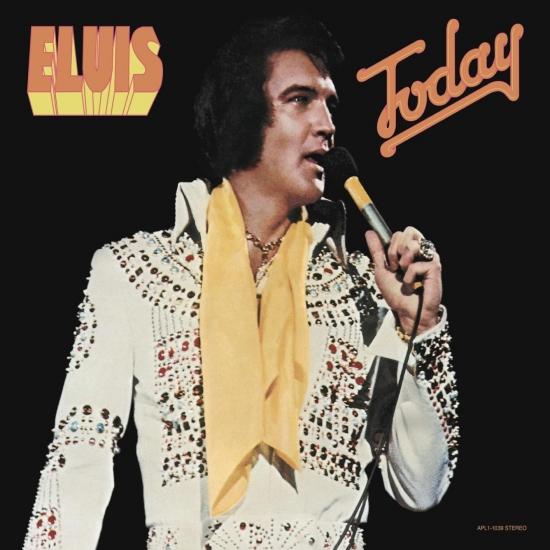 Elvis Presley's final studio album „Today“ is new again, via Sony Music to mark the 40th anniversary of the release. The 40th Anniversary Today (Legacy Edition), the last studio album to be released during the King’s lifetime, contains the entire original album (first released on May 7, 1975) while premiering 10 un-dubbed mixes from the sessions, providing a new intimate listening experience. Now, for the first time on an official release, fans can hear Elvis’s pure unvarnished performances of these songs (recorded March 10-12, 1975), freed from the controversial “countrypolitan” overdubs on the original 1975 release and compare them to the more polished versions of the finished album.
„Today“ includes a bonus disc of rare and collectible concert performances recorded live during May and June 1975, the period immediately following the original release of the album.
„Elvis Today is often cited by writers as Elvis' uncertain return to his Sun origins. There really isn't that much difference from the trio that resulted from 1973's Stax sessions, with the lesser tracks being a bit more substantial. The sound is better but the packaging had become, at this point, practically offensive: One color close-up after another, almost all from the Aloha from Hawaii special (or that pre-bloated period), back covers with no notes or technical data, just ads for other Presley Product. Still, an album with 'Susan When She Tried,' 'T-R-O-U-B-L-E,' and a hilariously appropriate reading of 'I Can Help' is worth listening to any time.“ (Neal Umphred, AMG)
Elvis Presley, vocals
James Burton, guitar
Chip Young, guitar
Charlie Hodge, guitar, harmony vocals
Johnny Christopher, guitar
Weldon Myrick, steel guitar
Buddy Spicher, fiddle
David Briggs, keyboards
Tony Brown, keyboards
Glen Hardin, keyboards
Jimmy Gordon, keyboards
Duke Bardwell, bass
Norbert Putnam, bass
Mike Leech, bass
Ronnie Tutt, drums
Millie Kirkham, background vocals
Ginger Holladay, background vocals
Mary Holladay, background vocals
Lea Berinati, background vocals
Recorded March 10–12, 1975 at RCA Studio C, Hollywood
Produced by Felton Jarvis
Digitally remastered