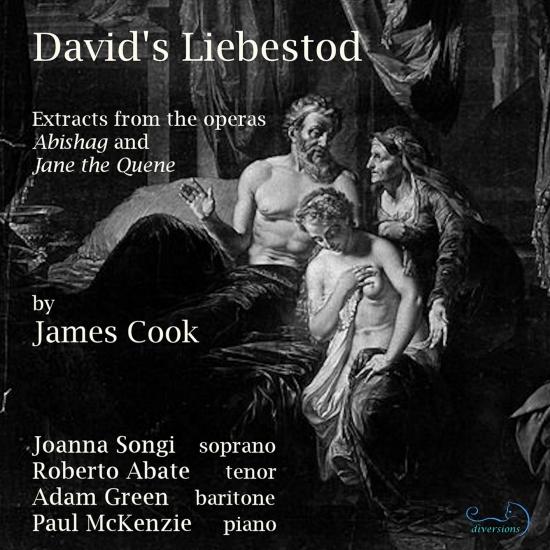 Info for David's Liebestod: Extracts from operas by James Cook

James Cook was born in Wales in 1969. He composed three major symphonies in his twenties and after a brief spell studying composition at Oxford in 1994 turned to the writing of sacred vocal and choral music, much of which has been recorded for Divine Art/Diversions. In 2000 he began to concentrate on organ music and competed a cycle of nine organ symphonies. Looking to expand his horizons further he turned to opera in 2010; his first, “Dorothy”, was premiered in London in 2015. Since then he has produced several more including a cycle of four on Biblical themes.
This mid-price mini-album includes three items, in voice/piano arrangements, from one of those Biblical operas, “Abishag” about the woman hired to be companion to King David, and two from “Jane the Quene”, which deals with the tragic story of Lady Jane Grey the ‘nine days Queen’ of England in the 16th century.
The performers are established and sought-after on the British opera circuit and have appeared with Royal Opera, English National, and other major companies in the UK and Europe. They and the composer have begun work on recordings of pieces from his major opera “Mary Magdalene”
Joanna Songi, soprano
Roberto Abate, tenor
Adam Green, baritone
Paul McKenzie, piano 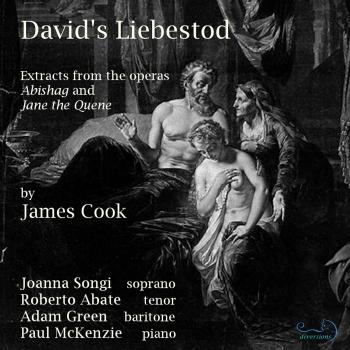 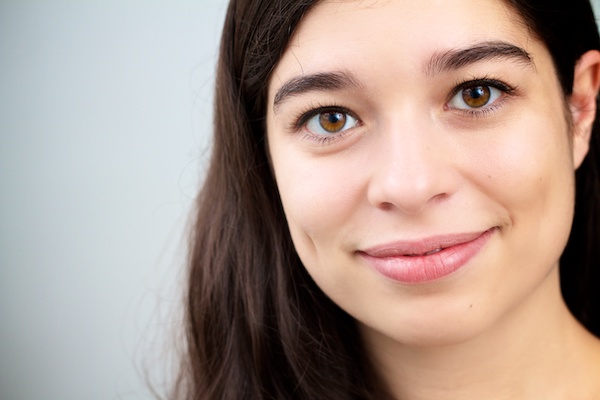 Joanna Songi
A graduate of the Royal College of Music and Cambridge University, Joanna has been a Britten-Pears Young Artist (2014) and Philip and Dorothy Green Young Concert Artist (2015-2017) and is an Opera Prelude Young Artist (2019).
She won first place in the Dean & Chadlington Competition (2018) Brooks-Van der Pump English Song Competition (2013), second place in the Maureen Lehane competition (2012) at the Wigmore Hall, the Thelma King Award for Singers (2014), and the 20th Century Song Prize at the John Kerr English Song Awards (2016). She was semi-finalist in the Das Lied Competition and the Nadia et Lili Boulanger competition (both 2019).
Her developing career has seen her perform with Glyndebourne Festival, Garsington Opera, Opera de Tenerife and Hurn Court Opera.
Adam Green
made his Royal Opera debut in 2011 in James MacMillan’s Clemency and has since sung Ibn Rashid (Zaid Jabri’s Cities of Salt).
Adam studied at St John’s College, Cambridge, the Royal Academy of Music and the National Opera Studio. His engagements include Belcore (L’elisr d’amore) and Arbace (Idomeneo) for English National Opera; Figaro (Il Barbiere di Siviglia) for Welsh National Opera; the title role in Don Giovanni for the Berbiguières Festival, France; Police Lieutenant (Tippett’s The Ice Break) for Birmingham Opera Company; Steuermann in Tristan und Isolde for Longborough Festival; and Aeneas (Dido and Aeneas) for ENO, Opera North, Opéra de Lille and the Aix-en-Provence Festival.
His concert appearances include Bach’s Christmas Oratorio in Frankfurt, Brahms’s Ein deutsches Requiem, Handel’s Messiah and Fauré’s Requiem at the Royal Albert Hall, Elgar’s Coronation Ode with the BBC Symphony Orchestra, Elijah in Budapest and Telemann’s St Matthew Passion in Aldeburgh.
Adam has won several prizes and awards, including the Song Prize at the National Mozart Competition, the Great Elm Competition, and the Ian Fleming and Sybil Tutton awards.
Roberto Abate
completed his Masters degree in Advanced Vocal Technique at the Wales international Academy of Voice, under the tutelage of Dennis O’Neill, having been awarded an Australian International Opera scholarship and an award from the Tait Memorial Trust. In his home country of Australia, he performed with WA Opera from 2006 to 2010. He won various awards and competitions at that time and was a finalist in the Bel Canto Award from the Joan Sutherland Society n both 2012 and 2013.
Since relocating to the United Kingdom, Roberto has performed in a wide range of roles in bel canto, verismo and contemporary operas with Opera North, Opera Vera and several other companies. His repertoire also includes the solo parts in Verdi’s Requiem, Dvořák’s Stabat Mater and Bach’s B Minor Mass to name but a few, and has appeared as soloist alongside both Sumi Jo and Dame Kiri Te Kanawa. He recently made his European debut as Don José in Carmen, in Holland.
Paul McKenzie
lives in London, and works as a Repetiteur for Opera: most recently with Grange Park Opera, English Touring Opera, and Opera Up Close.
Paul McKenzie was the holder of the Adami Award for Piano Accompanists Junior Fellowship at the Royal College of Music 2014-2015 and has continued to work there since.
Previously, Paul completed a Masters in Piano Accompaniment at the RCM, studying with Simon Lepper. Paul has also performed many concertos, and enjoys working as an orchestral pianist, a song accompanist and jazz pianist.

Booklet for David's Liebestod: Extracts from operas by James Cook