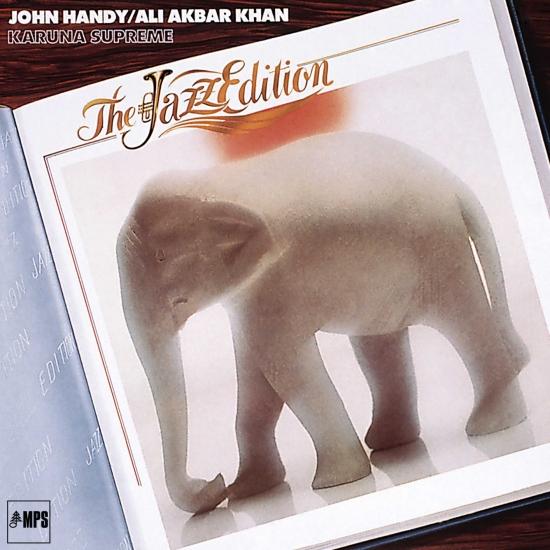 Recorded in 1975, Karuna Supreme is one of the finest examples of the fusion of Indian classical music and jazz. Ali Akbar Khan was a master of the Sarod, that magnificent string instrument with its 3000-year history. Khan was part of an Indian classical music family dynasty that traces its roots back to the 16th century. His father, the great Allaudin Khan, honored him with the title ‘Emperor of Music’, saying “give the message of the music as far as the sun and moon shine.” That is exactly what Ali Akbar did, moving to America and founding a school in California in 1967. Best known for his stellar work on several of Charles Mingus’ seminal recordings, alto saxophonist John Handy had already been playing with Khan, appearing together at both the Monterey and Berlin Jazz festivals. Tabla player Zakir Hussain’s father was the legendary Alla Rahka, and the player of the drone stringed instrument the tambura, Yogish Sahota, accompanied some of the greatest Indian masters. In Indian music, sound is God. Ganesha’s Jubilee Dance is a reference to the elephant-headed god of music and is based on a raga which means ‘vibrate your body’. Karuna Supreme, ‘a song of divine longing and love’, is the ‘jazziest’ piece. The Soul And The Atma is a dialogue between East and West in three movements. The Indian word ‘Atma’ stands for the innermost self which unites with God, and corresponds to the Western idea of soul. The first movement represents ‘longing for the union to come’, then there is a theme based on an Indian folk song expressing the love between East and West. The third movement represents genesis. AllMusic critic Sean Westergaard raved, “This is one of those rare
John Handy, alto saxophone
Ali Akbar Khan, sarod
Zakir Hussain, tabla
Yogish S. Sahota, tambura
Engineered by Carlos Albrecht, Kurt Rapp
Produced by Joachim-Ernst Berendt
Digitally remastered