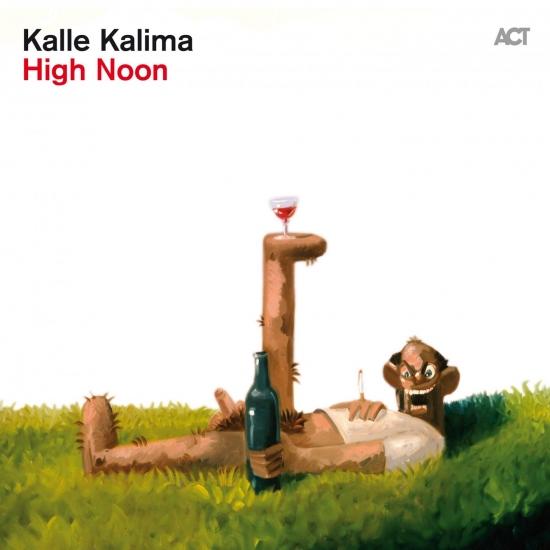 Kalle Kalima puts the Western back into country and western. High Noon: Wind scrapes across the empty streets... timorous townsfolk peek through closed shutters… as three figures head into town: a guitar-toting Finn from Berlin, Kalle Kalima, a veteran American bassist, Greg Cohen from way out west in Los Angeles, and a young gun from Germany, drummer Max Andrzejewski…
Kalle Kalima's music is mean, moody, magnificent, and is also adventurous and full of surprises. Whether he is off exploring the badlands on the borders of rock, putting his hand on his heart to salute his Finnish homeland, or inspiring jazz lawlessness in the band Kuu!, this forty-one year old is first and foremost a free spirit.
Kalle Kalima's new project takes him back to one of his first loves. “As a teenager, I had guitar lessons with a teacher who introduced me to country and western. I really got into it, and have played it ever since, mostly for my own pleasure.” Playing for enjoyment, however, is only part of the story. A few years ago he was in Austrian drummer Alfred Vogel's band “Die Glorreichen Sieben” (The Magnificent Seven), which put together two country-jazz projects, a new version of hits from westerns, and also issued a tribute to Neil Young.
Whereas those two projects were quite impulsive and carefree, “High Noon” takes a different tack. “This time it's about getting to the heart of the matter,” says Kalima. “This album is in the form of a road trip which passes through various landscapes. There's not too much to-ing and fro-ing, I've stuck to a tight unifying concept here: it's in the mould of ‘Kind of Blue’, but with country-jazz.” The thirteen tracks of the album display huge variety, but when taken together almost form a suite. As its central episode, there are four hits from films scored by the distinguished Hollywood film composer Dimitri Tiomkin, including (naturally) “High Noon”, the title theme of the classic western from 1952 starring Gary Cooper. The remaining tracks range from classic Western tunes like “South of the Border”, or the mid-19th century sea shanty “Santy Anno,” to the campfire classic “Ghost Riders In The Sky”. There are also evergreen songs such as The Shadows' “Man of Mystery” and Leonard Cohen's “Hallelujah”.
Kalle Kalima, guitar
Greg Cohen, bass
Max Andrzejewski, drums

Kalle Kalima
(b. 1973 in Helsinki, Finland) began his journey into sound with piano lessons at the age of six. Five years later he switched over to the guitar and has never looked back. He studied at the Sibelius Academy in Helsinki and at the Hanns Eisler Conservatory in Berlin under the guidance of Raoul Björkenheim and John Schröder to name a few. After taking up residence in Berlin, Kalima has experienced a revelation in his attitude towards free music.
So far Kalle has worked with trompeter Tomasz Stanko, sax player Juhani Aaltonen, pianist Heikki Sarmanto, bass players Sirone, Teppo Hauta-Aho, Carlos Bica & Ed Schuller, guitarist Marc Ducret, composer Simon Stockhausen, drummer Tony Allen and singer Linda Sharrock. He is also playing with Jimi Tenor, finnish underground pop star. Last years have been busy years for Kalima, touring mostly in Europe but also in Africa, Asia and USA.