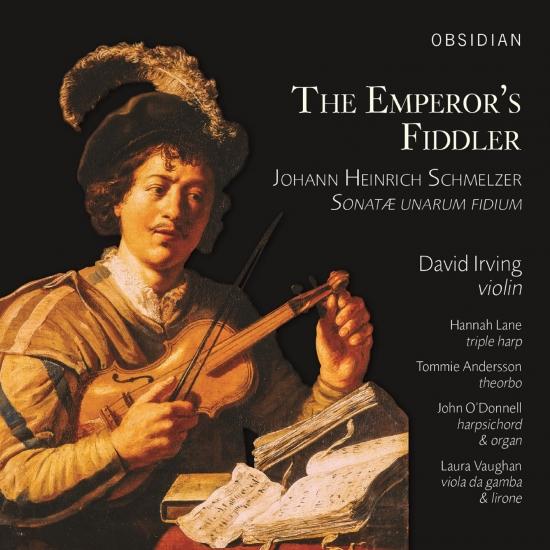 Info for The Emperor's Fiddler

In a new recording, David Irving and Obsidian Records showcase the work of Johann Heinrich Schmelzer (c.1623-1680). Schmelzer has languished in relative obscurity compared to some of his colleagues from the 17th century, but in 1660 he was described as “the famous and just about foremost violinist in all of Europe”. A virtuoso violinist, composer and multi-instrumentalist, Schmelzer dominated Vienna’s music scene for several decades, and became a favourite musician of the Holy Roman Emperor Leopold I (reigned 1658-1705). This disc explores the lavish sound-world and rich musical invention of the Emperor’s fiddler.
The intellectually rigorous recording recontextualises Schmelzer and reaffirms the significance of his music, focusing on his important collection of sonatas, Sonatae Unarum Fidium. The title of this series puns on a dual meaning: ‘fides’ can mean either ‘faith’ or ‘fiddle’. The phrase ‘unarum fidium’ therefore indicates both ‘unified faith’ and ‘one fiddle’, neatly pointing to a variety of meanings implicit in the music.
The sonatas included here are not broken into separate movements, but are each composed of a single, multi-sectional movement. Their musical structure metaphorically echoes the political situation for which they were composed: they were dedicated to Cardinal Carlo Carafa in the wake of new alliances being forged in German-speaking lands. As well as hinting at cultural and political unification, the punning title of the published collection also points to Schmelzer’s position as a virtuosic violinist, whose skills were perfectly suited to the sonatas he wrote for himself.
The works on this disc cover the full gamut of emotions, from extreme passions and extravagant virtuosity to the most intimate and profound expressions of poetic introspection, with elegant dances inserted for good measure.
The Emperor’s Fiddler highlights the use of original-style bows and baroque violin techniques, including the ‘chin-off’ style of which David Irving is a passionate proponent, and strings in equal tension. Schmelzer likely played violins made by Jacob Stainer, the most celebrated luthier in Europe, whose violins were renowned for their fine silvery tone and long considered superior to Cremonese models. Here the sonatas are performed on a replica of a c.1670 Stainer violin; the bow is based on seventeenth-century designs and is short and light, with its hair at high tension.
The booklet notes include extensive information about the instruments and performance practices implemented in the recording. The performance techniques and styles have been carefully researched for this disc, with meticulous attention paid to the quirks of notation in the original manuscript. The booklet also ends with suggestions for further reading, emphasising the intellectual rigour behind the recording.
"It has been a longheld dream of mine to perform and record the six Sonatae unarum fidium of Schmelzer, and it is a great honour and pleasure to release this project through Obsidian. These poetic works invite the violinist to apply a wide range of expressive and rhetorical approaches to phrasing, and the style of the repertoire calls regularly for improvisation and ornamentation. The use of equal tension stringing and a short light bow with high hair tension creates some very special timbres, which seem particularly appropriate for this music. With a large continuo group of four players on six instruments, my colleagues and I have been able to explore a large palette of tone colours, bringing new sound-worlds to life." (David Irving)
David Irving, violin
Hannah Lane, triple harp
Tommie Anderson, theorbo
John O'Donnell, harpsichord, organ
Laura Vaughan, viola da gamba, lirone 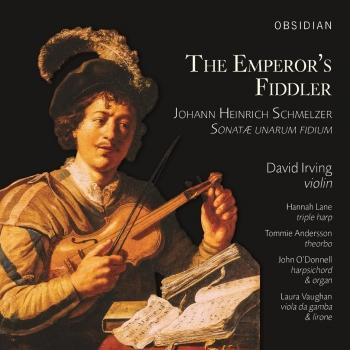 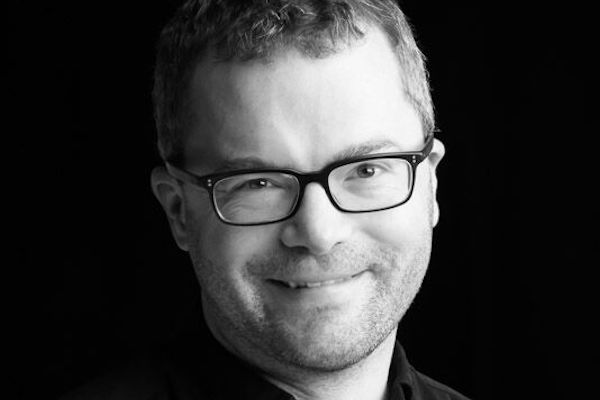 Dr. David R. M. Irving
is a musicologist, cultural historian, and baroque violinist. He studied violin and musicology at the Queensland Conservatorium and the University of Queensland, and undertook his doctoral research at Clare College, University of Cambridge, under the supervision of renowned scholar of Spanish Renaissance music, Tess Knighton. Before joining the Melbourne Conservatorium of Music, University of Melbourne, he held posts at Christ's College, Cambridge; Downing College, Cambridge; King's College London; the University of Nottingham; and the Australian National University. At the Melbourne Conservatorium of Music, David teaches courses in historical musicology, ethnomusicology, and historical performance practice. A passionate performer on baroque violin, he has worked with numerous leading early music groups in Australia and overseas, including the Australian Brandenburg Orchestra, Chacona (Australia), Concerto Caledonia (UK), The Early Opera Company (UK), the Gabrieli Consort & Players (UK), The Hanover Band (UK), La Compañía Musical (Spain), La Fontegara (Mexico), La Serenissima (UK), Le Concert Lorrain (France), the Saraband Consort (UK), St James's Baroque Players (UK), Accademia Arcadia (Australia), Latitude 37 (Australia), Ludovico's Band (Australia), Melbourne Baroque Orchestra (Australia), and XVIII-21 Le Baroque Nomade (France). While at Clare College, Cambridge, he played frequently with the Choir of Clare College, under the direction of Timothy Brown. David is a Consultant Editor for the journal Early Music (Oxford University Press), and sits on the Editorial Boards of the journals Eighteenth-Century Music (Cambridge University Press) and Musicology Australia (Taylor & Francis). From 2011 to 2013 he was a Member of Council for the Royal Musical Association (UK), and sat on the Editorial Board of the Journal of the Royal Musical Association (Taylor & Francis). In 2009, he was elected a Fellow of the Royal Asiatic Society of Great Britain and Ireland. David's first book, Colonial Counterpoint: Music in Early Modern Manila (Oxford University Press, 2010), examined musical practices in the Philippines under Spanish colonial rule between 1565 and 1815 (the period of the trans-Pacific galleon trade), and was named one of eighteen "Books of the Year" by BBC History Magazine in December 2010. With historian Tara Alberts (University of York), he co-edited the book Intercultural Exchange in Southeast Asia: History and Society in the Early Modern World (I.B. Tauris, 2013). He has published numerous articles and book chapters, and in 2010 the Royal Musical Association awarded him The Jerome Roche Prize "for a distinguished article by a scholar in the early stages of his or her career". He is the 2015 recipient of the McCredie Musicological Award, "Australia’s most prestigious award for a distinguished contribution to musicology", from the Australian Academy of the Humanities.

Booklet for The Emperor's Fiddler