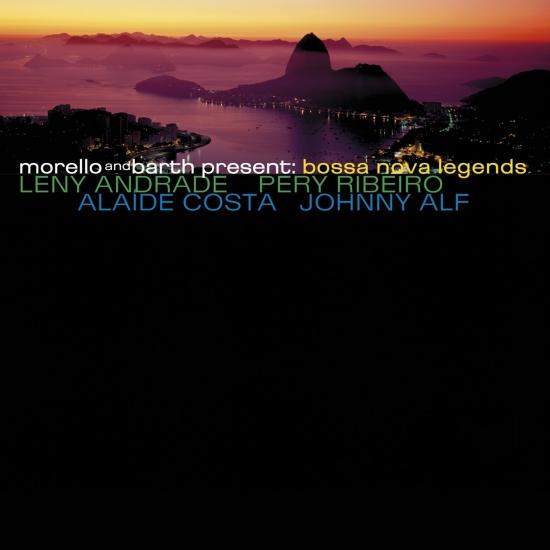 When guitarist Paulo Morello and saxophonist Kim Barth temporarily moved into an apartment on the Rua Nascimento Silva in Ipanema three years ago they never would have thought that this would effect their musical lives in such a great way. In search of local musicians to jam with they were lucky to find artists that regularly play with the most prominent names of the Brazilian Música Popular like Gilberto Gil and Milton Nascimento. The incredible virtuosity and the cordial atmosphere that bass player Lúcio Nascimento, drummer Adriano de Oliveira, pianist João Carlos Coutinho and their German pals engendered has already been captured on the release “Fim De Semana Em Eldorado” (Weekend In Eldorado) that you still may remember very well. It also featured two of the legendary names of Bossa Nova’s heyday: Johnny Alf who is considered the true father of the genre, influencing even the early Jobim, as well as his close friend Alaíde Costa, revered as the “Billie Holiday of Brazil” who was at the very heart of the new movement during the late 1950s.
After the unique experience of seeing this Brazilian-German band rekindle the classic bossa era live on tour all over Europe it is now time for chapter two in the “Bossa Legends” series. Morello and Barth team up again with their sworn friends from Rio as well as with Alaíde and Johnny, but also welcome two new voices who also have their prominent names scratched in the book of bossa history. Leny Andrade and Pery Ribeiro were acclaimed for their legendary “Gemini 5” shows (1965/66), accompanied by Bossa Três, the most important piano trio in Brazil at that time. These concerts sold out for a year and a half and were hailed as the most energetic and explosive shows of that time. Ribeiro is credited as being the first singer to record the world’s greatest bossa hit of all time, the “Garota De Ipanema”. Also other classics like “O Barquinho” and “Rio” are forever linked with his smooth voice. Later he worked with Sergio Mendes and his career is documented on more than 50 albums. Leny Andrade has created an image as a most versatile singer, who links samba and bossa nova with a profound jazz feeling like none other of her compatriots. Smitten by her dark voice and her brilliant scatting, The New York Times called her “The Sarah Vaughan of Brazil”. She has performed since the age of sixteen with Brazil’s leading ensembles and names, among them Sergio Mendes, João Donato and Eumir Deodato. Like their compatriots Costa and Alf, Ribeiro and Andrade performed with Morello and Barth for the first time in Europe, 40 years after the beginning of their collaboration, enthralling audiences in Cracow, Frankfurt, Hamburg, Manchester and Paris, climaxing with four evenings in the famous Calle 54 club in Madrid. Now you can enjoy all four bossa aces together. The “Bossa Legends” disc is a summit that features some of the unforgettable evergreens of the 1960s, along with some lesser-known tunes from the bossa and pre-bossa eras. At the age of 77, Johnny Alf reprises his roguish trademark composition, “Rapaz De Bem” and astonishes with his bilingual “Wave”, one of Jobim’s later masterpieces. Pery Ribeiro greets the “Garota De Ipanema” after more than four decades with his still crystal-clear and flexible voice, which also masters the tricky melody of “Desafinado”. Leny Andrade contributes a slow version of the first bossa hymn, “Chega de saudade”, and the melancholy Jobim/Mendonça tune, “Caminhos Cruzados”, while Alaíde Costa amazes with an emphatic and charming, “Ciúme” from Carlos Lyra. All pieces have been cleverly arranged and translated into a jazzy language by Morello & Barth and their pals, full of swinging guitar intermezzi, fluent saxophone and sparkling flute lines, some crisp horn passages here and there, and the superbly funky rhythm section. This is the real renaissance of bossa - the Copacabana years have now become timeless.
Leny Andrade, vocals
Pery Ribeiro, vocals
Johnny Alf, vocals
Alaide Costa, vocals
Paulo Morello, electric, acoustic guitar
Kim Barth, alto sax, flute, pandeiro
Cidinho Teixeira, piano
Lucio Nascimento, bass
Adriano de Oliveira, drums
Guests:
Tobias Weidinger, trumpet (on Despedida de Mangueira, A Voz do Morro)
Jürgen Neudert, trombone (on A Voz do Morro, Rapaz de Bem, Ciume)
Digitally remastered