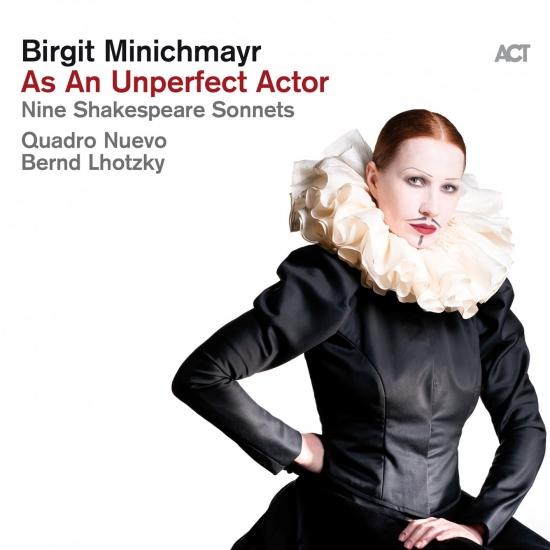 Info for As an Unperfect Actor (Nine Shakespeare Sonnets)

Austrian actor Birgit Minichmayr captures the imagination and holds centre-stage on “As An Unperfect Actor – Nine Sonnets by William Shakespeare”. Composer/ pianist Bernd Lhotzky and Quadro Nuevo have provided her with a wonderful array of musical contexts. Lhotzky’s kaleidoscopic musical vision and Minichmayr’s instinct for mood-setting have combined triumphantly. In this “perfect ceremony of love’s rite,” they never seem to run out of joyous surprises for the listener.
Birgit Minichmayr captures the imagination and holds centre-stage on “As An Unperfect Actor – Nine Sonnets by William Shakespeare”. This won’t come as a surprise to people in the German-speaking world, where the Austrian actor is well-known from countless appearances on TV and a substantial filmography. Perhaps equally unsurprising is the deep experience she can bring to Shakespeare: as an ensemble member of the Burgtheater company in Vienna, she has repeatedly lived out the searingly dramatic lives of the Bard’s characters, notably the daemonic anger of Lady Macbeth, the sadness of Ophelia, and even the uncomfortable truths of the Fool in King Lear.
What might be more of a surprise, however, is the exhilarating musicality she shows on this, her first complete album as a vocalist. One could have predicted the crystal clarity, meaning and intent in her words – the desolation in her voice in “the very birds are mute...the leaves look pale” in Sonnet 97, for example. And yet there is more, much more, not least Minichmayr’s uncannily natural instinct to find artful and felicitous ways to shape musical phrases.
Composer/ pianist Bernd Lhotzky has provided her with a wonderful array of musical contexts. As Minichmayr says: “He got so deep into the meaning of each sonnet, his music made it different every time. And we talked a lot about the colour, the meaning of each poem.” The opening track, “Mistress Mine”, Sonnet 130 is a masterfully deft piece of gender-fluid irony. In the poem, a man is describing possibly the ugliest woman he has ever seen – while also declaring that she is the one he loves. Lhotzky gives us an acerbic version in that most male-led of dances, the tango, complete with bandoneon, in which the words are sung by...a woman. Minichmayr then gives a masterclass in how to end a song as she hits, holds and nails the words “false compare” with triumphant fearlessness.
Throughout the course of the album, we are magically transported to new musical and emotional places. As Minichmayr says: “Through singing, through just doing it, I was able to find deep love, or deep sadness. I was really touched by it.” We are straight into the elegiac world of “Sin Of Self-Love”, or into world-weariness, tinged with an unmistakable irritation, of “Tired With All These”. And then, unforgettably, we land in the major-key contentment of “Mine Eye Hath Played The Painter”.
One of the secrets to this album’s success is Lhotzky’s wish to find melodies which have a certain ease and straightforwardness about them. He says that he approaches all music – whether he is listening to it or writing it – with one simple and direct question: “What story is this telling me?” Lhotzky is known for his work in the field of early jazz, but the range here is far broader, with allusions to examples of fine songwriting: Brassens, Robert Plant, James Taylor...
The collaboration between Minichmayr and Lhotzky had a very propitious start and has gone from strength to strength. They were invited to work together on a Dorothy Parker project in the Austrian spa town of Bad Schallerbach in the summer of 2019. Minichmayr had been booked to do readings, but was also keen to sing...Cole Porter’s “Just One of Those Things,” with its reference to Dorothy Parker in the first line. That worked out so well, it led Lhotzky to suggest a Shakespeare project to her which he had already embarked upon – it has been briefly glimpsed already on ACT, on one track of “Winter at Schloss Elmau”.
The instrumentalists are a Munich based group named Quadro Nuevo, with Philipp Schiepek’s contribution a stand-out. As Lhotzky says: “He’s a phenomenal guitarist, and really young. With his acoustic guitar he brings us back to the origins, to Dowland's songs with lute. And the fact that he also plays electric jazz guitar provides a connecting link across the centuries.” And then there is bassist D.D. Lowka’s large-scale Charlie Haden-ish bass sound. “D.D. and Philipp are a dream team,” says Lhotzky. And reedsman Mulo Francel brings a whole range of colours from luscious contrabass clarinet to fluent jazz soloing on saxophones. Accordionist Andreas Hinterseher? “He’s just a phenomenon,” says Lhotzky, “he hardly said a thing in the sessions, but every take was perfect.” Bernd Lhotzky's piano playing, for example as he sets the scene for "Let not to the marriage" has a deliciously understated and laid-back eloquence and elegance.
Bernd Lhotzky’s kaleidoscopic musical vision and Birgit Minichmayr’s instinct for mood-setting have combined triumphantly in “As An Unperfect Actor”. In this “perfect ceremony of love’s rite,” they never seem to run out of joyous surprises for the listener.
Birgit Minichmayr, vocals
Bernd Lhotzky, piano & musical director
Mulo Francel, tenor sax, clarinet, double-bass clarinet & sansula
Andreas Hinterseher, accordion, bandoneon, vibrandoneon
Philipp Schiepek, guitar
D.D. Lowka, double bass & percussion 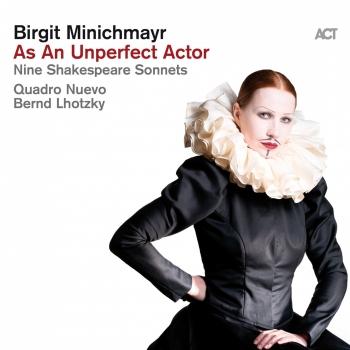 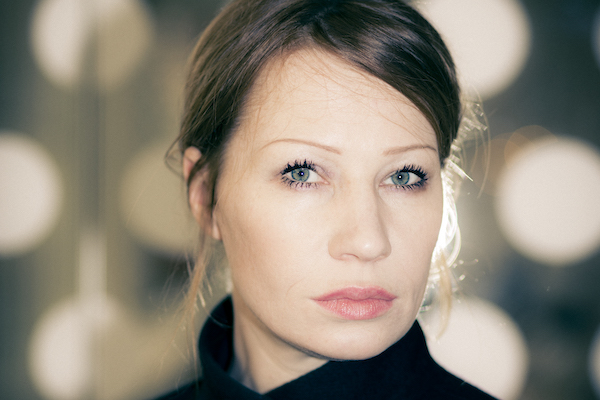 Birgit Minichmayr
born 1977 in Linz, trained at the Max Reinhardt Seminar in Vienna. During her acting training, she was already engaged at the Burgtheater. After a Castorf production at the Ruhrfestspiele in Recklinghausen, she joined the Volksbühne in Berlin in 2004. In 2007, she returned to the Burgtheater, before joining the Residenztheater in Munich in 2011. After that, she worked as a freelance actor. In addition to her stage work, for which she has received multiple awards such as the Ulrich Wildgruber Prize and the Nestroy Theatre Award, she has also acted in a large number of films. In the 2019/20 season, Birgit Minichmayr returned to the Burgtheater as a permanent member of the ensemble.

Booklet for As an Unperfect Actor (Nine Shakespeare Sonnets)