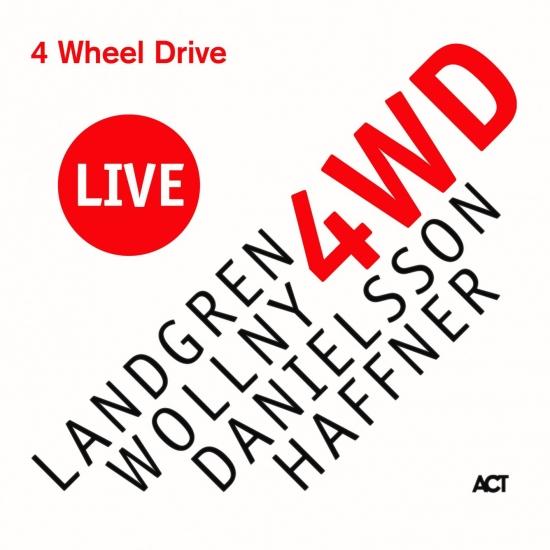 The studio album "4 Wheel Drive", a collaboration of four stars of European jazz interpreting the music of Sting, Billy Joel, Paul McCartney and Phil Collins, topped the German jazz charts for four months in a row, the following tour further enthused the quartet. "4 Wheel Drive live" documents the final concert of the tour at the Theaterhaus Stuttgart: "The concert surpassed all expectations. Sensational!" (Stuttgarter Nachrichten)
"Four top-league jazz musicians who just enjoy playing and who love good pop music," was how ZDF Heute Journal (German national TV news) introduced a feature about 4 Wheel Drive. “A jazz Olympics four," wrote the Neue Zürcher Zeitung. The group’s studio album spent four months at the top of the official German jazz charts, and now a new live album is being released.
Nils Landgren, Michael Wollny, Wolfgang Haffner and Lars Danielsson – any one of these four with his own band could have filled a concert hall such as the Prinzregententheater in Munich, the Alte Oper in Frankfurt or the Philharmonie in Berlin as part of an ACT JazzNights tour organized by Karsten Jahnke. So the combination of the four into a supergroup raised the kind of eager expectations that such encounters do not always fulfil, because great live performance is anything but a theoretical strategy game. Essentially, nothing is proven until it has actually happened in practice. And the extent to which this group really did come into its own in the concert hall can now be heard on "4 Wheel Drive Live", a recording of the last concert of the group’s eleven tour dates, on 19 April 2019, in front of a packed house at the Theaterhaus in Stuttgart.
Thomas Staiber of the Stuttgarter Zeitung was there and wrote: "In Stuttgart the supergroup exceeded all expectations. It was because the four were able to function so solidly with one another and to react with such instinctive understanding, that each of them had all the freedom he needed to stretch out fully as an improviser. [...] This musical four-cylinder engine with its four-wheel drive negotiated the rugged terrain of jazz and was equally at home in enjoyable pop music. They did both sensationally, and unleashed storms of genuine enthusiasm."
"The band just got better and better as it toured," says producer Siggi Loch, explaining the background to the release of this live CD as a follow-up to the original studio album. The original compositions plus cover versions of songs by Sting and Phil Collins took on a whole new identity on stage. As Oliver Hochkeppel from the Süddeutsche Zeitung stated enthusiastically after the Munich concert: "In the live context, the songs from their album gave these top-calibre jazz musicians just the right blank canvas to paint stunning pictures. […] And to witness how each musician picks up ideas from the others in a split second and creates new ones is to reach an understanding of why music is the most beautiful of all languages. Come to a concert like this feeling tired, and you will be enlivened by episodes when ferocity and sheer pace and power take over. And the special flair of these four is really evident in the rests, in the thoughts that are quietly interspersed, in filigree pianissimo tones and the gentlest of contact with the instruments."
When all of this coalesces, one experiences one of those very special concert evenings. And thanks to the live recording now issued as "4 Wheel Drive Live" this fleeting and precious moment will not be forgotten.
Nils Landgren, trombone & vocals
Michael Wollny, piano
Lars Danielsson, bass & cello
Wolfgang Haffner, drums
Recorded live in concert at Theaterhaus Jazztage Stuttgart by Adrian von Ripka, April 19, 2019
Mixed and mastered by Adrian von Ripka at Bauer Studios Ludwigsburg, Germany
Produced by the artists
Executive Producer Siggi Loch